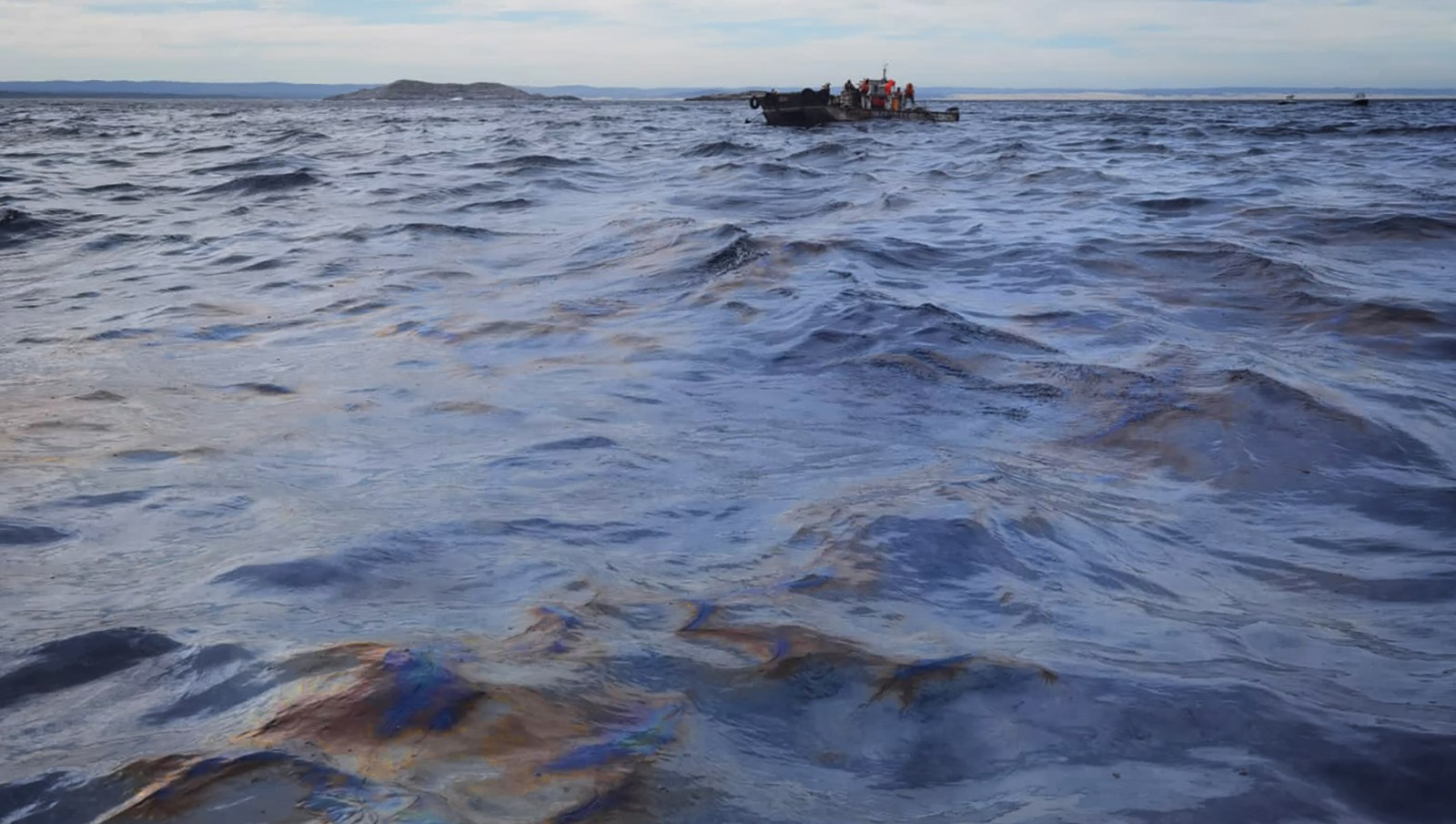 The South African Maritime Safety Authority cleans up after the oil spill in Algoa Bay on Monday, 23 May 2022. (Photo: Supplied)

A clean-up is under way in Algoa Bay after a ship-to-ship oil transfer went wrong on Monday.

The South African Maritime Safety Authority (Samsa) is investigating the cause of the oil spill that occurred during a ship-to-ship transfer of oil at Algoa Bay on Monday.

Samsa activated all relevant pollution response units, booms were deployed to contain the oil around the vessels, and the authority has suspended bunkering operations in Algoa Bay.

Monica Stassen, the preparedness and response manager at the Southern African Foundation for the Conservation of Coastal Birds (Sanccob), said this was the fourth oil spill in the Algoa Bay region since 2016 when ship-to-ship bunkering was first permitted, with one involving the Croatian-flagged MV Solin just six months ago.

“So we are extremely concerned about the impact that this and any oil spill could have on the endangered species of seabirds,” he said.

Sanccob was working closely with the relevant authorities regarding the spill in Algoa Bay, and no oiled seabirds had been reported yet.

“As part of our internal preparedness strategy, our response teams in Cape Town and Gqeberha are on standby in the event that we need to mobilise people and equipment, and Sanccob’s facility in Gqeberha is ready to receive birds,” she said.

Daily Maverick reported on 15 February 2020 that environmental organisations had opposed Samsa’s decision to lift the moratorium on new licences for ship-to-ship fuel bunkering in biodiversity hotspots in Algoa Bay from 1 April.

The organisations say past oil spills have affected endangered African penguins and other threatened seabird species.

Wildlife and Environment Society of South Africa Algoa Bay branch chairperson Gary Koekemoer said most of the heavy oil spill is in the area between the two ships and, thankfully, contained within the booms.

“A huge amount has passed, the estimates range from 1,000 litres to 3,000 litres, and is drifting with the southwesterly wind away from Gqeberha but into the marine protected area and close to the St Croix group of islands,” he said.

“Our concern is that it was a very experienced bunkering operation, at midday, in near perfect conditions, with a rapid response, and this is the extent of the spill. Those are not normal Bay conditions. We remain critical of the decision to bunker in our bay on principle, but specifically to allow bunkering to occur on the boundary of our marine protected area that’s key to sustaining the Bay’s ecosystem.”

Koekemoer said it’s not just about cute penguins and dolphins, the whole ecosystem is affected and this ultimately affects small-scale fishers and the tourism industry.

“We carry the risk and loss. The profits are reaped offshore,” he said.

According to a combined statement from Samsa, the Department of Forestry, Fisheries and the Environment and the Transnet National Ports Authority, the clean-up and recovery of the spilled oil continued on Thursday morning and the recovery teams also continued aerial surveillance using a drone and oil-recovery boats.

“The two vessels involved were separated yesterday (25 May) and the smaller vessel MT Lefkas has berthed at the Port of Port Elizabeth and all the oiled equipment has been removed from the water thus posing no pollution threat to the port and its operations. The motor tanker Umnenga II is not able to enter port yet due to the unavailability of a suitable berth,” said Samsa spokesperson Tebogo Ramatjie.

SANParks boat patrols had revealed no oil near the Algoa Bay islands and no oiled birds had been spotted.

“Members of the public are requested to report oiled birds and wildlife to SANParks or Sanccob Gqeberha at the Cape Recife Nature Reserve on 063 942 4702, but not to approach or try to capture the affected wildlife. Rangers will continue to monitor the islands for oiled birds returning from their feeding grounds in Algoa Bay,” he said.

None of the oil had reached the beaches, and most of it had been cleaned up. There was no oil sheen visible on the water.

“A fixed-wing aircraft with state-of-the-art oil-sensing equipment has been charted from Cape Town to conduct a full search for any oil over the entire Algoa Bay area. The aircraft will use high-definition cameras and oil-detection systems to complete a full aerial surveillance of the Algoa Bay area,” said Ramatjie.

If any oil was spotted, the aircraft would also complete live oil-spill modelling to determine the direction of the oil. However, the authorities were optimistic that most of the oil had been recovered and only the vessel hull cleaning needed to be completed.

He said the Environmental Protection Vessel and the Sarah Baartman are on standby in Algoa Bay to help with the clean-up.

In a statement on Wednesday, Ramatjie said five oil-recovery boats were being used to collect the oil and by Tuesday afternoon all the visible heavy oil had been collected while large patches of light oil sheen had been spotted in Algoa Bay.

“A helicopter was used for aerial surveillance and to assist in directing the boats towards the oil sheen for collection. However, due to rough sea conditions, the oil recovery was suspended by 3.35pm. The removal of the oiled ‘oil absorbent material’ between the two vessels continued throughout the night,” he said.

Oil spill modelling by the International Tanker Owners Pollution Federation indicated that the oil would not impact the Swartkops River or metro beaches, but would drift eastward towards the beaches of Woody Cape. DM/OBP