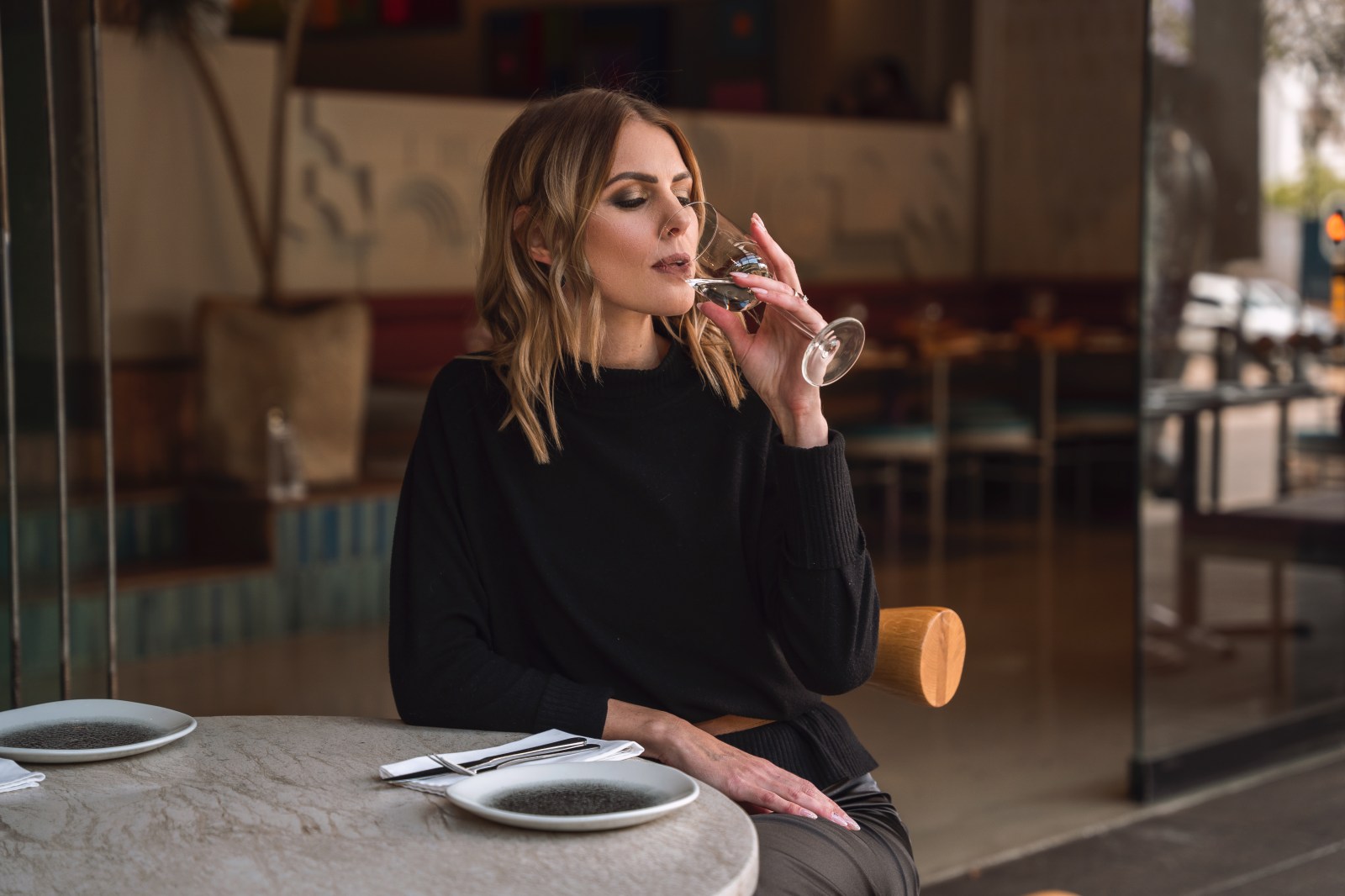 There used to be a time when the first thing you asked when stepping into any African country was, ‘Can we drink the water?’ Water has come a long way since then.

I have always been suspicious of water, so what better than to pony up R400 for a water tasting event at my local, the Mount Nelson. Apart, of course, from seeing who on a lovely Saturday morning in Cape Town wants to give up a couple of hours to taste water.

Candice Jansen (trigger warning: high pretension) is a “water sommelier”, reported to be the only one in the country. She is an elegant thin-wristed vegan, dressed in a slipstream of soft coloured polyester silks and decorated with an armoury of small gold chains. Her cheek bones are like cut glass. She calls herself “an advocate of water and curator of water menus” for hotels and restaurants and says the future of water is her “passion”. She signs off her emails with “yours in hydration”.

Currently, because of climate change and various other factors, water, once taken for granted, is now box office. The demi monde, the metropolitan elite, the smartypants consumer are all talking water, discussing methods of filtration, mineral content and more.

Growing public concern about the safety of South Africa’s tap water has been largely confirmed by the government’s latest Blue Drop report, which reveals an alarming decline in water quality and management processes in several rural districts – as well as some of the country’s larger towns and cities. Nearly a quarter (23%) of municipalities were ranked at “critical risk”.

The water tasting event takes place in what was once the main dining area of the Mount Nelson hotel. There are five tables on which sit bottles of water. Candice, who has always been “passionate” about water, directs operations. The room has a strange glaucous atmosphere that gently fizzes with fluorescent lighting. Candice flits about the room like a butterfly, delicately holding a long-stemmed glass full of, yes you guessed, water.

There are about 40 water wallahs who sit at tables with the bottles of water in front of them. I recall how my aunt used to stay at the Mount Nelson and eat in this very room with crates of specially ordered wine from Stellenbosch to get her through the summer.

A lot of comparisons are made with wine tasting but there are important differences; water is survival, wine is selective. Pairing water with food is the next big thing and soon restaurant patrons in the country may have a broader range of water choices beyond the ordinary still or sparkling water. There is a lot to learn, “Wines are always paired with still water and never sparkling water,” Candice tells me.

However, today we are talking taste.

“Okay, let’s taste,” says Candice, as the bottles start to open. The flavour of water is determined by its total dissolved solids (TDS) level, which comprises minerals like potassium, calcium, and magnesium.

“The level of minerality will affect the taste of water, so no two waters are the same,” she tells me and adds. “Water, for example, should never be served in a tumbler but always in a water glass, but not everyone has a water glass. But a white wine glass is perfect,” Candice says, twirling a stem between her long painted nails. Another thing to remember is, never throw ice from a different source into the same glass. And lemon is an absolute no-no.

A quick water classification will start you on the road.

Purified Water: Derived from a municipal source and has been filtered through reverse osmosis with a minimum amount of added minerals.

Spring Water: The most honest form of water sourced from natural springs.

Mineral Water: Comes from natural springs and has to have a mineral content of at least 250ppm.

Distilled Water: Water that has many of its impurities removed through distillation. Distillation involves boiling the water and then condensing the steam into a clean container. Long term consumption of distilled or demineralised water containing low TDS levels is not recommended and can be linked to health issues.

The first taste is a local water called Primal artesian. The label says it comes from ancient dolomite caves in the northwest province of the Cape. It tastes of – well, water. All the waters come with exotic monikers and derive from places such as the deep caves of the southern Australian coastline, high up in the frozen forests of Norway, or snow-capped peaks of the Andes or chuckling little streams in the Italian mountains. Like wine, water has different taste characteristics informed by the environment in which it is sourced.

Artesian is the word de jour for water. Confusing it with the word artisan, I had to google it – it describes waters that flow naturally from underground to the surface. An artesian well does not require a pump. The best waters are naturally carbonated but many of the less expensive waters have bubbles added, something I find interesting.

There are three things I want to know: can you drink the tap water in most of South Africa’s towns, particularly Cape Town? Depends where you live.

What is the best home water filtration system? I have always mistrusted them all. No one knows.

Does boiling water cleanse it of bacteria? No.

Candice’s talk is a bit haphazard and unclear, full of contradictions and vague assertions. The acoustics are bad and there seems little method. I sip away when what I would really like is to slip away. Most of the water I taste could come from the garden hose. There is one water, an Australian bottled water, Three Bays, gathered of course from some deep cave off a dangerous southern coastline, that has a very salty taste. So, waters do taste differently. I learn that the reason is something called TDS, total dissolved solids, and the trick is to stick a water high in minerals among the more ordinary waters, so you start to get an early taste for the differences.

The thing about water is that it is untantalising unless you are lost in the desert. You can hardly look at a bottle of water and wet yourself with longing when you know you can get a similar sensation by just turning on the tap. However, to the water wallahs at my table, each brand tastes different although until water gathers the fruity nomenclature of wine, these differences are difficult to enunciate. One day we will refer to water in the extravagant way we refer to wine.

I say perkily, “In my experience restaurants make their profit with bottles of designer water,” a fact that is confirmed to me by a long-time employee of the hotel who was listening in. I tell a story about dining with a very rich friend who always demands “tap water”. Bottled water on a menu is ridiculously expensive. Why? I know for a fact that they often fill old bottles with tap water.

Silence. The water wallahs clam up. I discover most of the participants have some skin in the water game, for it is a game. I mean, I had no idea that the whole world is full of bubbling underground water bursting with vital minerals, although nobody is sure what good water should contain. I was hoping to find some mean which I could use to choose the right water.

It is an enormously complex subject and has an undertone of real desperation, reaching down from the lofty heights of a room in the Mount Nelson to people living hugger mugger and sharing one tap between millions. Candice does occasionally try to bring in the conservation side of things but somehow her utterings sound hollow in these buffed up cushions and designer water surroundings.

Some of the bottles are really sexy, the Loftenren from Norway is a doll. It comes in an enormous glamorous glass bottle with a lid like a horse’s hoof. I take an empty bottle home with me, fill it with tap water, put it in the fridge and serve it with a Mother’s Day lunch. “Gosh, love this water,” says a guest, so pure, so refreshing.

“Ah yes,” I say knowingly, “straight from the snow-capped mountains of Norway.” DM/TGIFood