The Covid Essays, or Cry Anew, the Beloved Country 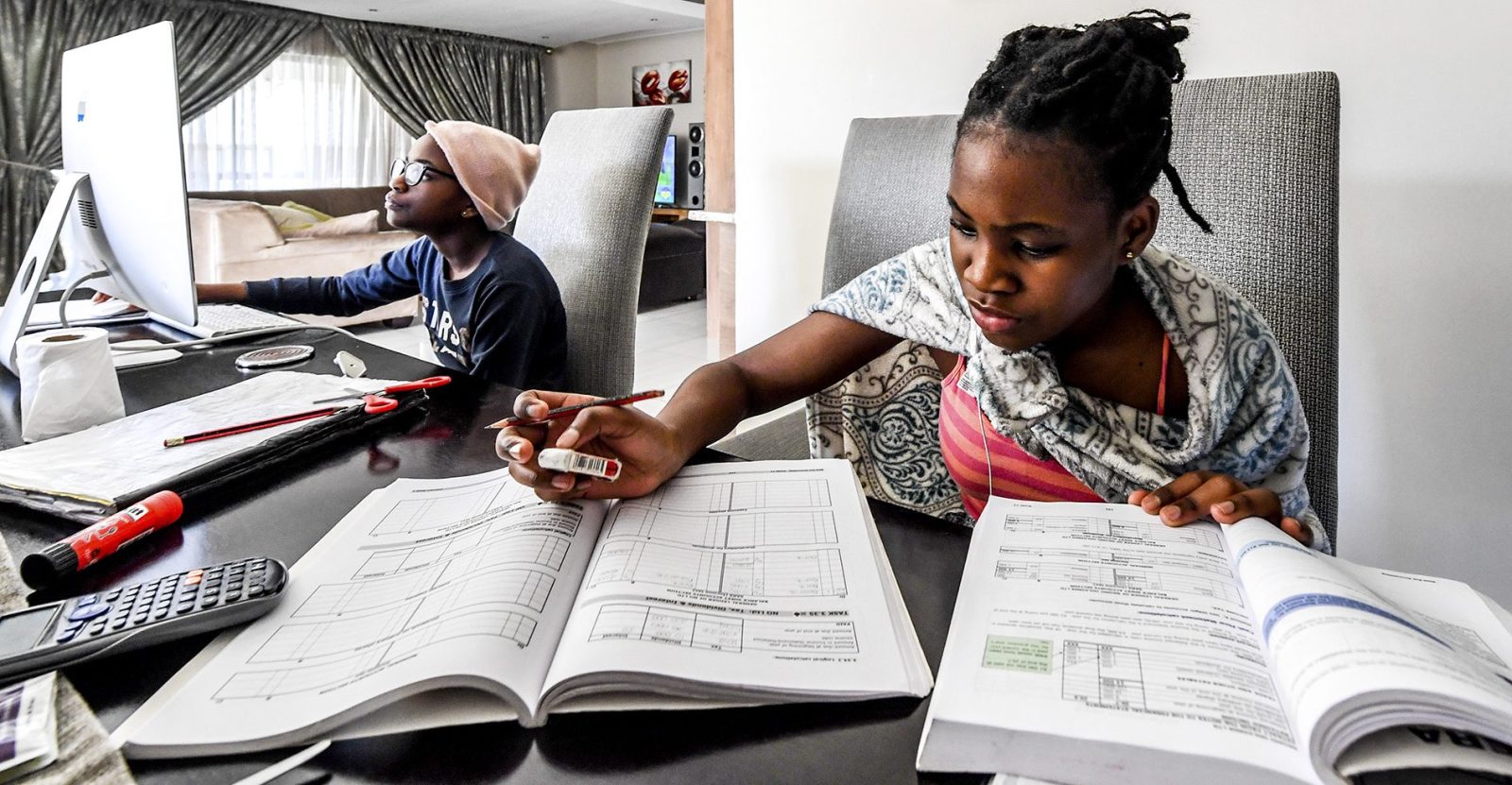 Kaone (left) and Tshwaragano Seshibedi, who are in Grade 7 and 12 respectively, at home during lockdown in Johannesburg in April 2020. (Photo: Gallo Images / Sydney Seshibedi)

Grief is part of life, Ben Okri teaches us, and sometimes time can put a strange honey in the sadness. Or, as Alan Paton wrote, simply: ‘Cry, the beloved country, for the unborn child that is the inheritor of our fear.’

I always knew that South Africa suffered. Service delivery protests.  Gender-based violence. The world’s worst inequality. Gloomy responses in global happiness surveys. Indeed, it has never taken much more than logging on to Daily Maverick to encounter a litany of tearworthy national woes.

Nor is it surprising that the pandemic has gravely aggravated this pain, disrupting an already failing education system, shedding three million jobs, plunging an additional four million people into food insecurity and causing 313,000 excess deaths.

But, as author Annie Dillard has noted, there is seeing, and then there is seeing. And sometimes a seemingly random incident can open a window to view the humanity behind the statistics.

In the story that follows, I will be discussing pupil work protected by confidentiality laws and policies. As a result, I am not at liberty to share names, identifying details or first-hand quotes. For the same reason, the institution for which I worked will remain nameless.

What happened, though, was this: early in 2022, I helped with the admissions process at a highly competitive extracurricular high school programme. Our test would assess maths, physics, chemistry and English reading comprehension and writing – the basic ingredients of academic excellence in South Africa for pupils interested in science.

We received several hundred applicants, so we knew marking the tests would take a team of tutors and teachers, working flat-out for a whole week.

Before the test, we English teachers endlessly debated what the essay topic should be. We wanted a prompt that would test critical reflection, but would also be personal and engaging.

More importantly, we wanted a topic that would at least be equally accessible to all pupils. So, no Christmas questions, which might exclude Jews or Muslims. No inquiries about taxi ranks, which could feel distant to pupils with family cars, but no queries about favourite shopping malls, either.

Sports, then, or music? But not every high-schooler follows Kaizer Chiefs or swoons over the latest Kurt Darren hit.

So, then, land reform? Environmental protection?

But no, we needed an issue about which every 10th-grader might be expected to have an opinion. In other words, a universal experience.

Write a 200- to 300-word essay on the topic, “What it has been like for me to live through the Covid-19 pandemic”. Include specific memories and examples.

What, exactly, was I expecting that Monday as we picked up our plastic bins filled with dozens of brown envelopes, each containing piles of handwritten essays?

We sat in one of those university classrooms so devoid of personality that they seem designed to dull creativity. The rows of plastic and metal stools, the plain linoleum and wood-composite desks, the red BIC pens: all of these intensified my dread at six full days of non-stop marking.

But then I started reading the Covid essays, and very soon it became clear that the chief students in this particular classroom would not be the invisible teenage applicants, but rather me and my colleagues.

I read 10 essays, 20. Forty. During the mid-morning break, I brought scones and tea to my colleagues.

“We’re going to need this,” I said, and no one needed to ask what I meant.

To give readers a sense, here are some examples, approximately reconstructed:

I recall that perhaps for the first 10 or so essays, I still clung to the notion that what I was reading was somehow distorted. The pupils had sensed that reporting more suffering would allow them to write more dramatically. Or they were copying the stories they saw on TV, about overcoming adversity.

But soon the sheer number muted all such objections. All in all, I marked or moderated about 200 scripts that week, of which only a quarter or so fitted the majority mould I had expected: I missed school, but I’m proud of how I’ve made up lost ground. My whole family got Covid, but thank God, it was all pretty mild.

About three-quarters (150 scripts) were along the lines of the ones above, narratives of concentrated, matter-of-fact agony, devoid of self-pity, but unforgettable in their details of hardship.

The cumulative impact on my psyche, and those of my colleagues, was less like being buried in toxic sludge, and more reminiscent of the proverbial water torture invented by Hippolytus de Marsiliis. One drop on the forehead is nothing, but hundreds of such droplets and in the end, every tale becomes a torment.

How on Earth did we as a nation – as a human community – do it?

How did we handle such intense pain, and then still show up for a Saturday admissions test? How were we going to turn people down after sharing with us such profound wounds?

South Africa’s inequality was also starkly visible. What struck me most was how schooling seemed to have such a powerful effect on prose quality.

Put differently: I could read an essay written with multiple references to what theorists call education underprivilege: home language different from language of instruction. Poverty- and crime-ridden surroundings; parents who had not been to university; experiences of racism, sexism or homophobia.

Yet, from the sentence quality and correctness alone, I would be able to make an excellent guess whether such a pupil had attended a privileged and well-resourced school, or a struggling, undersupported and overcrowded one.

At last, we finished the assessment, chose our participants and sent out acceptances and rejections. Two weeks later, my colleagues were staffing tables at an orientation event on a local campus, talking to excited youngsters about everything they’d be doing that year.

Ultimately, my experience of marking the Covid essays was both humbling and hopeful.

Humbling because the adversity faced by young South Africans seemed so vast and horrifying.

But also hopeful because several hundred pupils soon began sacrificing their Saturdays for the sake of learning and achievement. Orphanhood or homelessness, depression or hunger – they were not going to let anyone stop them from getting an education. Mzansi, take note: the Covid generation is on its way, and they aren’t dawdling by the wayside. DM/MC

Glen Retief’s The Jack Bank: A Memoir of a South African Childhood, won a Lambda Literary Award. He teaches creative non-fiction at Susquehanna University and is currently spending a year in South Africa as Fulbright Scholar. He writes in his personal capacity.