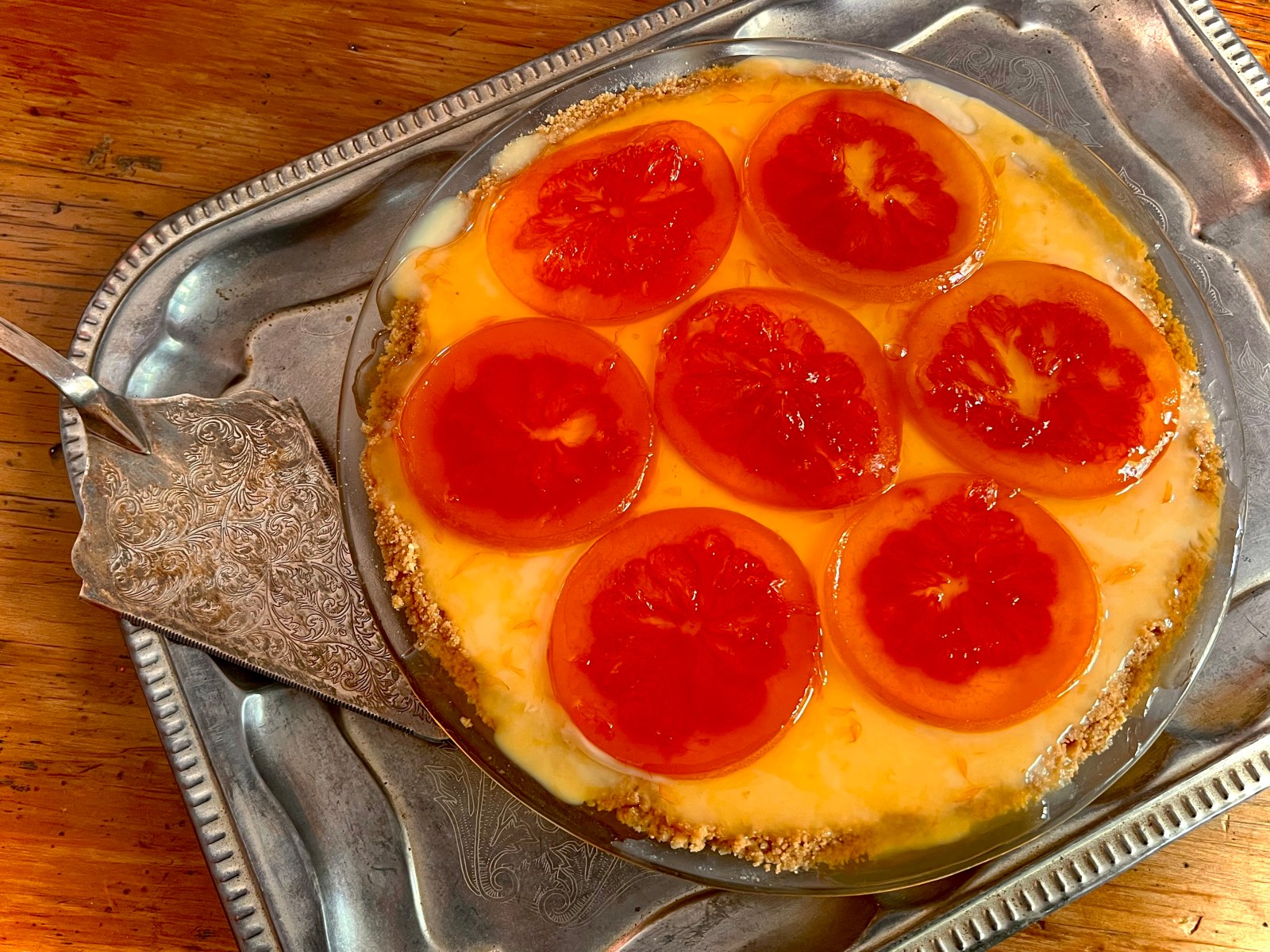 Lemon, peppermint crisp, Cremora, granadilla – with a lineup like that, we can only be talking about South Africa’s obsession with ice-cold sweet tarts oozing condensed milk, with one or other of those flavourings (there are others too), set in a base of crushed Tennis biscuits mixed with melted butter. All hail, the classic fridge tart.

For a dessert or teatime treat so simple, there are surprising variations in how you can make a South African fridge tart. With or without jelly (many recipes don’t use it)? With or with custard or cream? But if it has no condensed milk in it, it’s another recipe altogether. You can even forgo the Tennis biscuits and use ginger or Marie biscuits instead, or digestives; but leave out the condensed milk and travesty has entered the kitchen.

Over time, it seems that the Peppermint Crisp tart has risen above the others as the nation’s most beloved fridge tart. I think it’s those bright green, crunchy, shiny shards that do it. They taste divine, they look wondrous. I like to put a bar of Peppermint Crisp on a board, still in its packet, and bash the hell out of it with a hammer. Seriously: a hammer. Then pour the contents into a bowl and what you have is thousands of tiny, green shards and bits of chocolate, for sprinkling on top of a tart or ice cream or anything you fancy. I sometimes stir them into (slightly defrosted) vanilla ice cream and refreeze it.

The traditional Peppermint Crisp tart also contains an ingredient generically called caramel treat, which is actually caramelised condensed milk, found alongside regular cans of condensed milk on supermarket shelves. The caramelly cream combined with the choc-minty joy of Peppermint Crisp characterises this intensely sweet dessert, which is somehow sweeter than all the others, probably thanks to the caramel treat in it. As if anything could be even sweeter than regular condensed milk…

The Peppermint Crisp tart appeared some time after Orley Whip was first introduced in 1960. The manufacturers of this oil-based non dairy “cream” printed a recipe for a Peppermint Crisp tart on the packaging and in due course it was being made in kitchens all over the country. Of course they’re going to milk that for all it’s worth. Can’t blame them.

Having said that, ever wondered what exactly Orley Whip is, if it’s not cream (it’s not)? According to foodstuffsa.co.za, the food trade publication, the recipe for it remains unchanged since the 1960s when it was introduced and is “an oil in water emulsion made from refined, hydrogenated palm kernel oil, vegetable emulsifiers and stabilisers, and natural colourants and flavourants”. Seems an awful lot of trouble to go to to avoid using the perfectly natural cream provided by a milk cow.

If the 1960s gave us the Peppermint Crisp, the 1980s gave us the Cremora tart, and we have, they say, arguably the most famous of all South African television advertisements to thank for it. If your mind has not immediately flipped to “It’s not inside; it’s on top” on reading that, you weren’t in South Africa in the 1980s. In the unfailingly amusing ad, a man approaches the refrigerator desperately trying to find the Cremora … but, look, you have to see it to appreciate it. So here it is:

Nestlé, who own the brand, say that soon after that ad was launched to become a national obsession (well, the ad, not necessarily the product), people began using it in what is now another classic South African fridge tart. Errieda du Toit, in her excellent book Share (Struik Lifestyle), writes of this beloved tart: “The Cremora tart, with its pleasant lemon flavour and creamy mouthfeel, has appeared in recipe books since the 1980s. The greatest admirer of the tart, Herman Lensing, my good friend and the food editor of Sarie, takes no notice of snobbish talk that says it’s culinary kitsch. He regards the tart as his own little rebellion to show the world that his feet are planted firmly on the ground. ‘It makes no difference how “grand” the city tries to make me. I always want to be the guy who tastes the love rather than the ingredients,’” Du Toit quoted Lensing as saying. That speaks to my heart.

How to make a fridge tart? Let’s take lemon, for example. Some recipes call only for the Tennis biscuit base, lemon juice, condensed milk and custard; others include cream cheese; yet others call for lemon jelly as well. My mom’s old recipe calls for whipped cream as well as lemon juice and condensed milk, but no jelly.

I’m going against the grain here, I know, but of late I have taken to including jelly in the mix, as I find many fridge tarts too runny. Nothing from the flavour profile is taken away; you just have a nice set dessert filling with a bit of a wobble to it, like a panna cotta.

For a recipe to illustrate this piece, instead of using lemon I decided to make a tart of pink grapefruit, as they are plentiful now and in season, and boy do they look good.

To switch things up further, I also made a pink grapefruit sugar syrup in which I simmered thin slices of pink grapefruit. They turned out beautifully translucent and attained a ruby hue reminiscent of a blood orange; I was thrilled. These, topped with the rest of the syrup, became a glaze for the tart once it had set perfectly in the fridge.

Melt the butter. Crush the Tennis biscuits and mix with the melted butter. Press this into a 20 cm tart dish that you’ve first oiled with cooking spray, and refrigerated for half an hour or more. Don’t use butter to grease the base as it tends to make the crust stick to the bottom.

Zest one pink grapefruit using a fine grater. Stir the grapefruit zest into the condensed milk. Retain the fruit for its juice.

Mix the contents of a packet of lemon jelly with 225 ml boiling water. Whisk vigorously until dissolved. Don’t add cold water as the packet would advise you to do; the juice will do that job for you. So, stir in the juice of 2 pink grapefruit. Leave it to cool to room temperature. (Not in the fridge; you don’t want it to set.)

Once the jelly has cooled, fold the condensed milk into it.

Pour into the biscuit base and refrigerate.

Meanwhile, pour 1 cup of granulated sugar into a small saucepan with ½ a cup of pink grapefruit juice and ½ a cup of cold water. Bring it to a simmer while stirring until the sugar has dissolved. Slice a pink grapefruit thinly and immerse the slices in the syrup. Let it simmer very gently for 5 to 10 minutes then turn off the heat and let it cool completely.

When all the heat has gone from the fruity syrup, remove the set tart from the fridge and decorate with rounds of grapefruit, pour the remaining syrup over, and return it to the fridge. DM/TGIFood