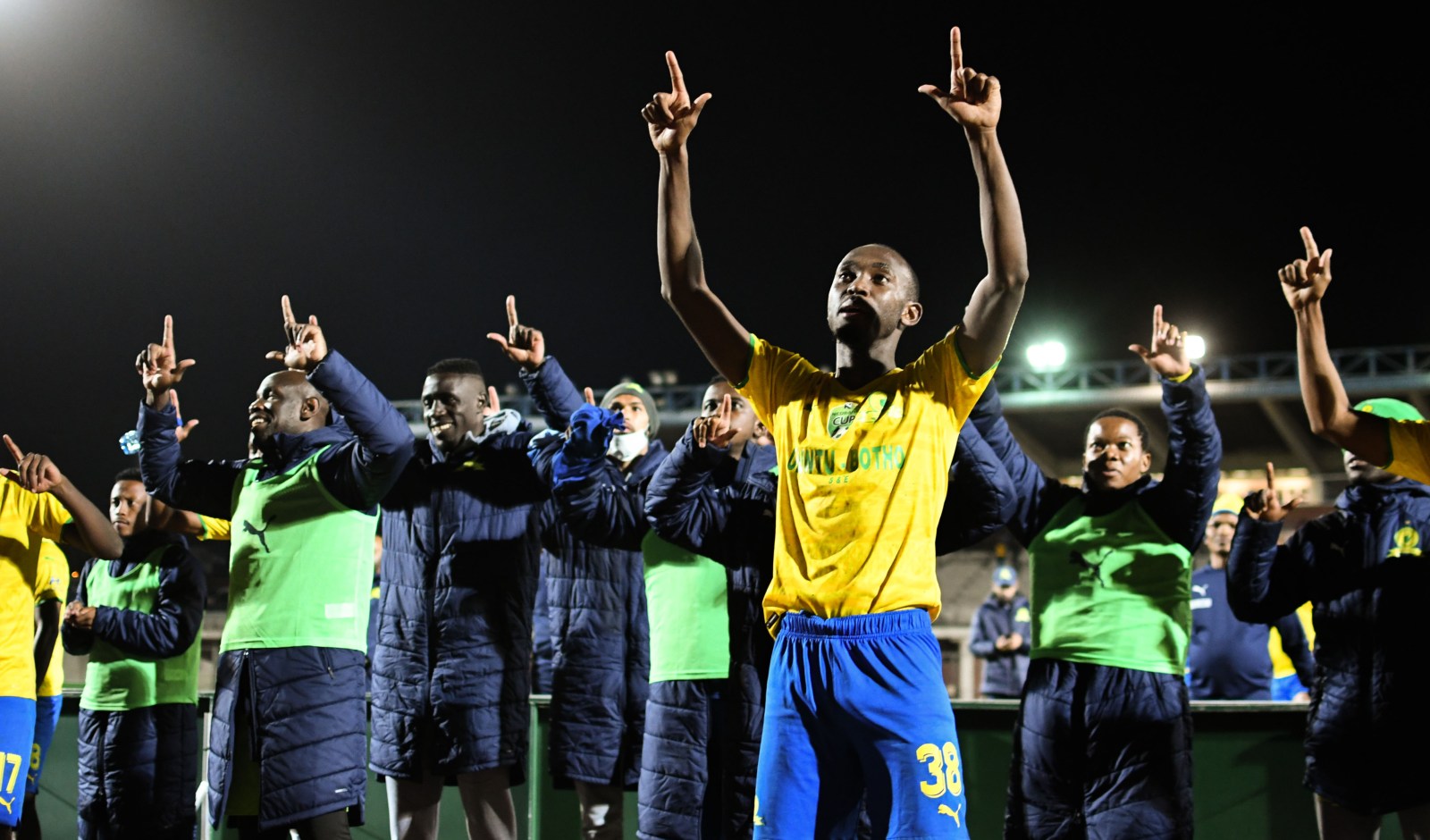 Mamelodi Sundowns celebrate with fans during the Nedbank Cup semifinal against Royal AM at Chatsworth Stadium in Durban on 30 April 2022. (Photo: Darren Stewart / Gallo Images)

Mamelodi Sundowns and Marumo Gallants clash in the Nedbank Cup final on Saturday – a chance for the former to seal an impressive, though consolatory domestic treble.

Alongside Orlando Pirates, Mamelodi Sundowns are one of just two South African sides to win a treble in the Premier Soccer League (PSL) era.

On Saturday evening, in the Nedbank Cup final against Marumo Gallants, Sundowns have an opportunity to join the Buccaneers as the only two sides to have completed the treble twice.

Masandawana, who won their first treble in 2020, already have the MTN8 trophy in the cabinet, and recently wrapped up their fifth domestic league title on the trot.

If they are able to navigate past Gallants in the final – at the Royal Bafokeng Stadium in Phokeng, North West – then the Tshwane giants will add the Nedbank Cup (which they last won in 2020). That success will draw them level with Pirates, who won their two trebles in 2011 and 2012, under the tutelage of Dutch coach Ruud Krol.

This prospect, though, does little to soothe the ache that Masandawana still feel following a premature Caf Champions League exit at the hands of Angolan outfit Petro Atlético. This is according to the undisputed South African champions’ co-coach, Manqoba Mngqithi.

The elimination was Sundowns’ third in a row in the quarterfinal stage of the premier club football competition in Africa.

“To everyone it will look like a successful season. But the truth of the matter is that us as coaches and the players, we know we could have had four trophies,” Mngqithi told journalists at the team’s headquarters in Chloorkop on Wednesday.

“Unfortunately, we bombed out again in the quarterfinals of the Champions League. But to a certain extent we should be proud that we’ve improved our benchmarks from last season, where we only had one trophy. Now we already have two. Already, that says we have done better than last season,” the former Golden Arrows mentor added.

“However, the dark cloud from the Champions League remains and we’re still unhappy about that.”

The coach hinted that sometimes being the favourite heading into a tie can be a disadvantage – before adding that it’s ultimately up to the coaches to ensure the players are in the right space mentally to deal with that label and its pressures appropriately.

“To be honest, and I think I have shared this before, these are some of the matches I don’t like. Matches where you are expected to win and where everybody looks at you as the favourite are very difficult. You have a responsibility as a coach to intrinsically motivate the players to understand that the game is just as important as if you were playing any other big team.”

Holders Gallants are seeking back-to-back trophy wins in the Nedbank Cup after beating Chippa United 1-0 in the 2021 edition. To reach that final the Limpopo side took Masandawana to a penalty shootout in the semifinal and snatched a 6-5 victory.

Despite that past success, Gallants coach Dan “Dance” Malesela is mindful of a deadly Sundowns side who are likely to put them to the sword if they do not show up fully ready for battle on 28 May.

“Beating the number-one team in the country now? Everybody can argue, but they are [the best], they won the league before the league even ended. It takes a good team to do that; it takes a magnificent team to be able to win the league way before the league ends… We are dealing with a team that is so professional,” Malesela told journalists.

The match kicks off at 6pm. DM