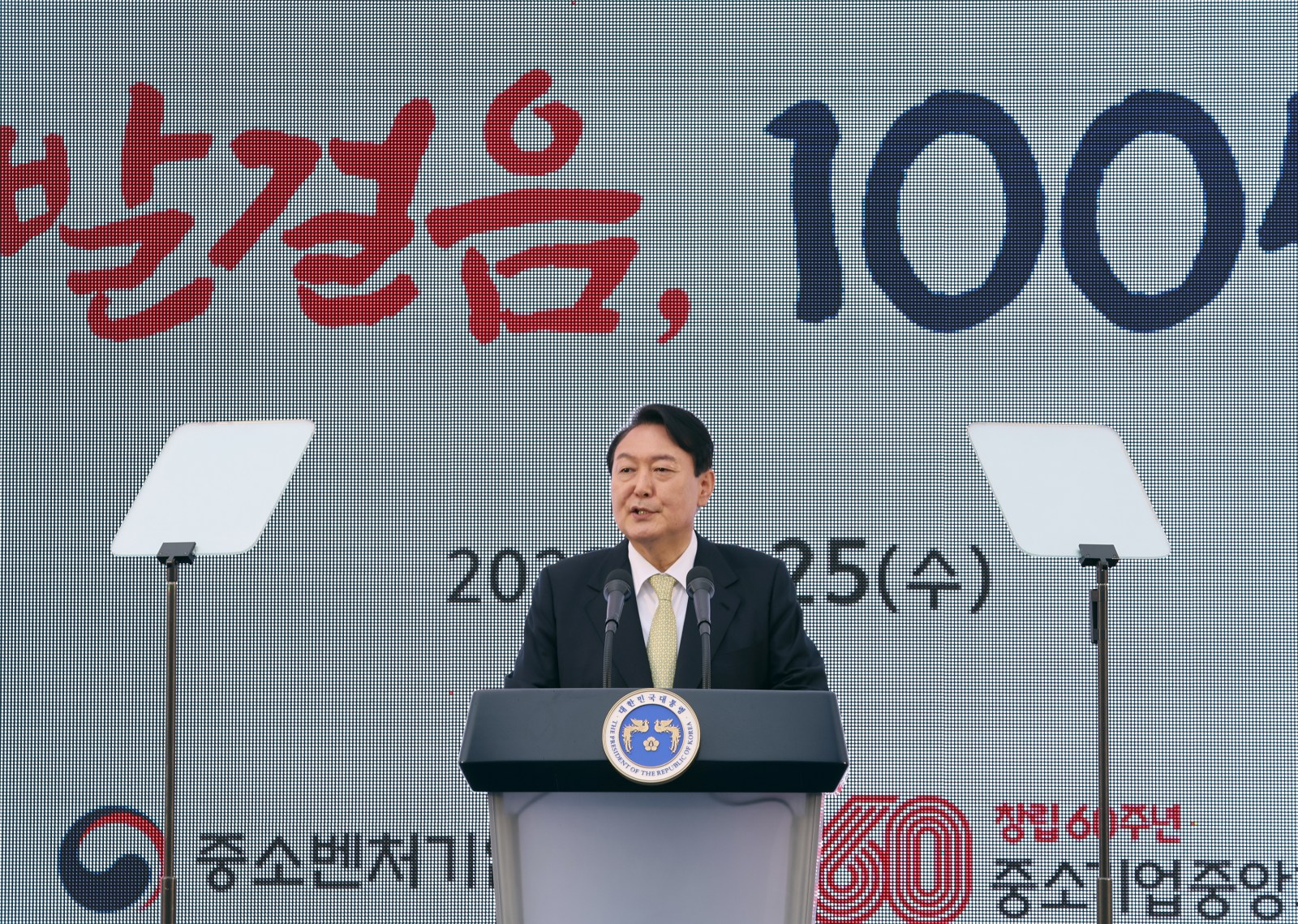 South Korean President Yoon Suk-yeol delivers a speech at a conference of small and medium-sized enterprises organized by the Korea Federation of SMEs at the presidential office complex in Yongsan, Seoul, 25 May 2022. EPA-EFE/YONHAP SOUTH KOREA OUT

SEOUL, May 26 (Reuters) - Just two weeks in office, South Korean President Yoon Suk-yeol faces clouds over his political honeymoon after a second cabinet nominee withdrew from consideration due to allegations about favouritism in university admissions.

Yoon’s conservative party, its approval rating at a two-year high of 50.1% according to a Realmeter poll released this month, is keen to retain electoral favour as it confronts an opposition-controlled parliament and local elections next week that will be its first test at the polls since taking office.

At stake is its pro-fairness and anti-corruption image, a key advantage that helped it to oust the incumbent party in a hard-fought election in March and that could be a factor in mayoral and gubernatorial elections on June 1.

“Disappointment is likely to lead to lower turnout among young voters who chose Yoon at the presidential election over the fairness issue,” Eom Kyeong-young, the director at the Seoul-based Zeitgeist Institute, said.

Chung ho-young, Yoon’s choice for health minister, withdrew his nomination this week after media reports suggested he may have used his senior position at a national university hospital to help his children gain admission to the university’s medical school years ago.

According to a survey published early this month by polling firm Korea Research International Inc, 56.6% of respondents said Chung’s nomination was “inappropriate”, nearly double the 24.7% who said it was “appropriate”.

Chung denied he did anything illegal but said there may have been aspects of the incident that did not meet the public’s expectations.

Earlier this month, Kim In-chul, Yoon’s pick for education minister, withdrew following media reports that he was suspected of using his influence as chief of the Korea Fulbright Alumni Association to secure scholarships for his children to study in the United States.

Kim apologised to the public as he stepped down, saying he “won’t try to explain or make an excuse”.

Yoon’s office said it respected the decisions of his nominees, but declined further comment on the matter.

Lawmakers from Yoon’s party, however, had suggested that Chung should remove his name from consideration.

The pair of scandals hit a particularly sensitive spot for Yoon, a former prosecutor general whose path to the presidency began after investigating a former justice minister and his family over misdeeds that included falsifying his daughter’s academic achievements.

Yoon’s campaign had stressed fairness, the fight against corruption and a level economic playing field, prevailing in the March election by a margin of just 0.7% – the narrowest in South Korea’s 35-year history of direct presidential elections. He took office for his five-year term on May 10.

Fuelling the rise of fairness as a political flashpoint has been the widening wealth gap among younger voters in their 20s and 30s.

That gap grew in 2021, with those in the top 20% of that age group holding about 35 times more wealth than those in the lowest 20%, liberal South Korean lawmaker Kim Hoi-jae said, citing government data.

Facing hyper-competitive school admissions and job markets, the public is losing patience with influential officials who are perceived to have abused their power to secure advantages for their children, said Koo Jeong-woo, a sociology professor at Seoul’s Sungkyunkwan University.

“Public anger has been building up following a series of similar academic scandals,” Koo said.

Kim Min-jung, a 19-year-old who is preparing for a college entrance exam this year, was disheartened by the Yoon nominees’ controversies.

“It’s unfair and a betrayal to those who are going the difficult yet right path,” she said.