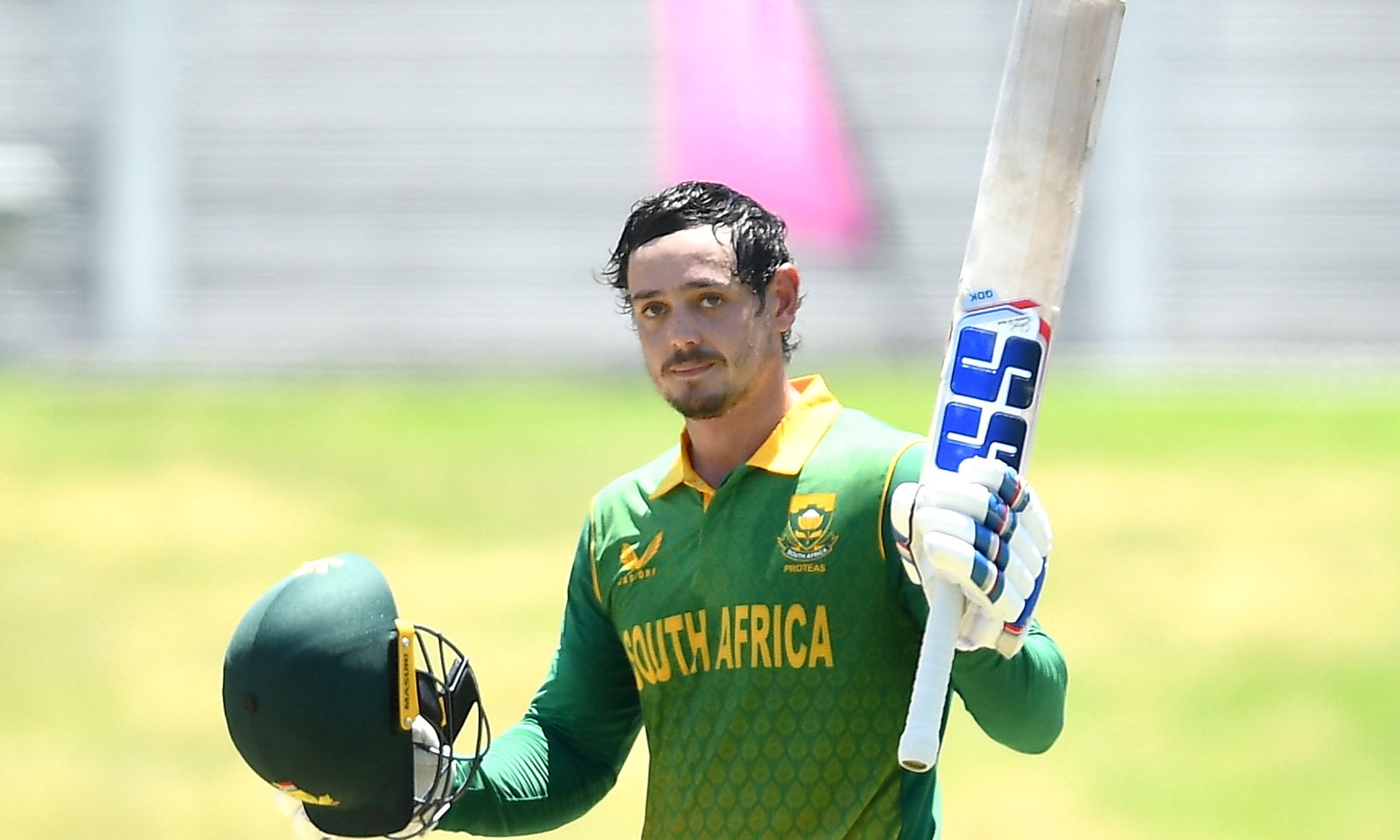 SA players have been in good form during the Indian Premier League, which is a boost with an away T20I series against India next month.

South African batters have flourished in the 2022 Indian Premier League (IPL), but among the bowlers, only established star Kagiso Rabada made a significant impact during the tournament.

South Africa are due to play India in a five-match T20 series beginning on 9 June and on the evidence at the current IPL tournament, the batters will need to maintain their good form in the international arena.

The IPL is the perfect preparation for the Proteas as many of South Africa’s best will take on India and vie for a place in the upcoming T20 World Cup in October.

The IPL playoffs work a bit differently with the top two teams on the league table battling it out in the first playoff match. The winner goes straight to the final while the loser plays a semi-final match against the winner of an eliminator match between the third and fourth-placed teams on the league table. The winner of that semi-final match plays the final, which is set for Sunday 29 May.

Du Plessis was dismissed in the opening over for a golden duck as his side set a formidable 207 for LSG to chase. De Kock also holed out in the opening over in his team’s reply, scoring six runs in five deliveries. LSG — playing in their first season in the IPL — ultimately failed to chase the target, only reaching 193-7 in reply, knocking De Kock’s side out of the tournament.

Meanwhile, Rassie van der Dussen’s Rajasthan Royals took on David Miller’s table-topping Gujarat Titans in the first playoff match on Tuesday. While Van der Dussen has been on the periphery of his team — playing only three matches, accumulating 22 runs at a lowly strike rate of 91.67 — Miller has played an integral role in getting his side to the final.

In the playoff match, Miller played an irresistible knock, scoring 68 not out off 38 deliveries, striking three fours and five sixes. Miller led his Gujarat Titans team’s — in their first season in the IPL — chase as they made the 189 set by the Rajasthan Royals look paltry.

The South African finisher has had his best ever IPL season this year. He is currently the sixth-highest run-getter in the tournament, scoring 449 runs at an average of 64.14 in 15 matches. Miller’s strike rate exceeds 140 and has a season-best score of 94 not out. Miller’s form will be integral to South Africa’s success as they seek consistency from their batting department.

Rabada — in a league of his own

Rabada has been the standout South African bowler in the tournament, which unfortunately has come to an end as his team — the Punjab Kings – failed to qualify for the knockout stages.

Despite this, Rabada has led his team with the ball with wonderful pace, control and variation. The big quick snapped up 23 wickets in his 13 matches at a marvellous average of 17.65.

He is the third-highest wicket-taker in the tournament and the leading fast bowler. Rabada’s economy rate of 8.45 is a tad high but considering he often bowls two overs at the death — when the big hitters are in full swing — it remains respectable.

Rabada is on the cusp of breaking a long-held record by IPL and Sri Lankan cricket legend, Lasith Malinga. The South African quick needs one more wicket to become the fastest bowler to reach 100 IPL wickets.

He currently has 99 wickets from 63 matches while it took Malinga — the previous record holder — 70 matches to reach the milestone.

Unfortunately, Rabada will have to wait until next season to achieve the accomplishment as the Punjab Kings’ race is run in the 2022 version of the event.

De Kock has had a rocky last 12 months off the field, but seems to have found a new lease of life at one of the IPL’s new franchises — LSG. The wicketkeeper batter has had an outstanding season, a highlight being his incredible, career-best unbeaten 140 off 70 balls against the Kolkata Knight Riders on 18 May. It was the third-highest individual score ever in the IPL.

De Kock is third on the run-scorers list this season with 508 runs at an impeccable average of 36.28 and a sumptuous strike rate of 148.97. Until the knockout loss on Wednesday, De Kock provided his LSG side with a fast start alongside his captain and opening partner KL Rahul, who is second on the run-scoring charts. De Kock has notched three half-centuries and the solitary century this season.

De Kock’s wonderful form with the willow has been supplemented with excellent glovework, taking 11 catches and one stumping.

Faf du Plessis, now leading RCB has had a solid first season with his new team as he sits just behind Miller, in seventh place, in this season’s leading run-scoring charts.

The former Proteas captain, who has not been selected for South Africa’s tour of India, led his side to the eliminator as his side scraped through to the playoffs in fourth place. After defeating LSG on Wednesday, they will now play in what is essentially a semi-final against the Rajasthan Royals on Friday.

The RCB opener has amassed 443 runs at an average of over 31.64, striking at 130.2. Du Plessis’ top score of 96 against LSG, during the league stage of the tournament, came at a crucial time for his side as no one else in his team managed to get more than 30 runs.

Aiden Markram was in scintillating form for the Sunrisers Hyderabad, although his IPL season is over they failed to qualify for the playoffs.

In Markam’s 14 matches, he scored 381 runs at an exemplary average of 47.63 and a strike rate touching 140. He has done well as his side’s finisher, notching up three half-centuries. Markram has struggled in 50-over and Test cricket in the last 12 months for the Proteas, he will, however, hope to kick on with his T20 form in the green and gold in June.

South African cricket fans will be delighted to see Anrich Nortje running in and bowling fast in the IPL for the Delhi Capitals as well as being selected for the T20I series in India. The lightning-quick bowler has been out of action for six months through injury but has recently returned to action in the IPL.

Nortje has only played six matches and taken nine wickets at an average of 24.11. His economy of 9.71 is high, however, a positive is that Nortje has lost no pace despite his lengthy layoff.

The 22-year-old Marco Jansen has had an inconsistent IPL season, however, the experience gained playing against some of the world’s best batters will only benefit the development of the lanky left-arm quick as he prepares for South Africa’s tour to India.

Jansen, a teammate of Markram’s at the Sunrisers, played eight matches, taking seven wickets at an average of 39.14. His economy of 8.56 is decent for a young bowler who often opens the bowling and bowls at the death.

Dwaine Pretorius is expected to play as the number one all-rounder for the Proteas against India, however, the Chennai Super Kings man, has struggled for consistent game time and performances in the IPL.

Pretorius has been in and out of the side, playing six matches, scoring 44 runs with the bat at an average of 11 and a strike rate of 157.14. With the ball, the allrounder has also not found his best form, taking six wickets at an economy of 10.

The Mumbai Indians ended the league stage of the IPL with the wooden spoon. They do, however, have a youthful squad and acquired two of South Africa’s best young batters this season. Dewald Brevis was the name on everyone’s lips this season as the bright young batter struck monstrous sixes with surprising ease.

The 19-year-old still has a few chinks in his armour and was not selected for South Africa’s tour to India, however, there is plenty of time for the batter to continue developing and represent the Proteas.

Brevis’ appearances came sporadically in the IPL as he played seven matches, scoring 161 runs at an average of 23 and a blistering strike rate of 142.

It is worth noting that Brevis scored most of his runs in boundaries, striking 14 fours and 11 sixes, which on the one hand shows his brilliant ball-striking ability while on the other, shows his current inability to rotate strike frequently.

Tristan Stubbs was called up to the Mumbai Indians squad as a late injury replacement. He has also been called up to the Proteas camp to tour India. His selection for the national team is based mostly on his domestic form which has been outstanding.

Stubbs has had a rough start to his IPL career, playing only two matches, scoring zero off two balls in the first and then being run out for two in the second.

The 21-year-old has shown he has the potential to play match-winning innings for his side, hopefully, his unfruitful stint in the IPL doesn’t make too much of a dent in his confidence and he shows some of his ability in the national colours against India next month. DM