Without social justice, social cohesion is a temporary,...

Without social justice, social cohesion can only be a temporary, ephemeral concept 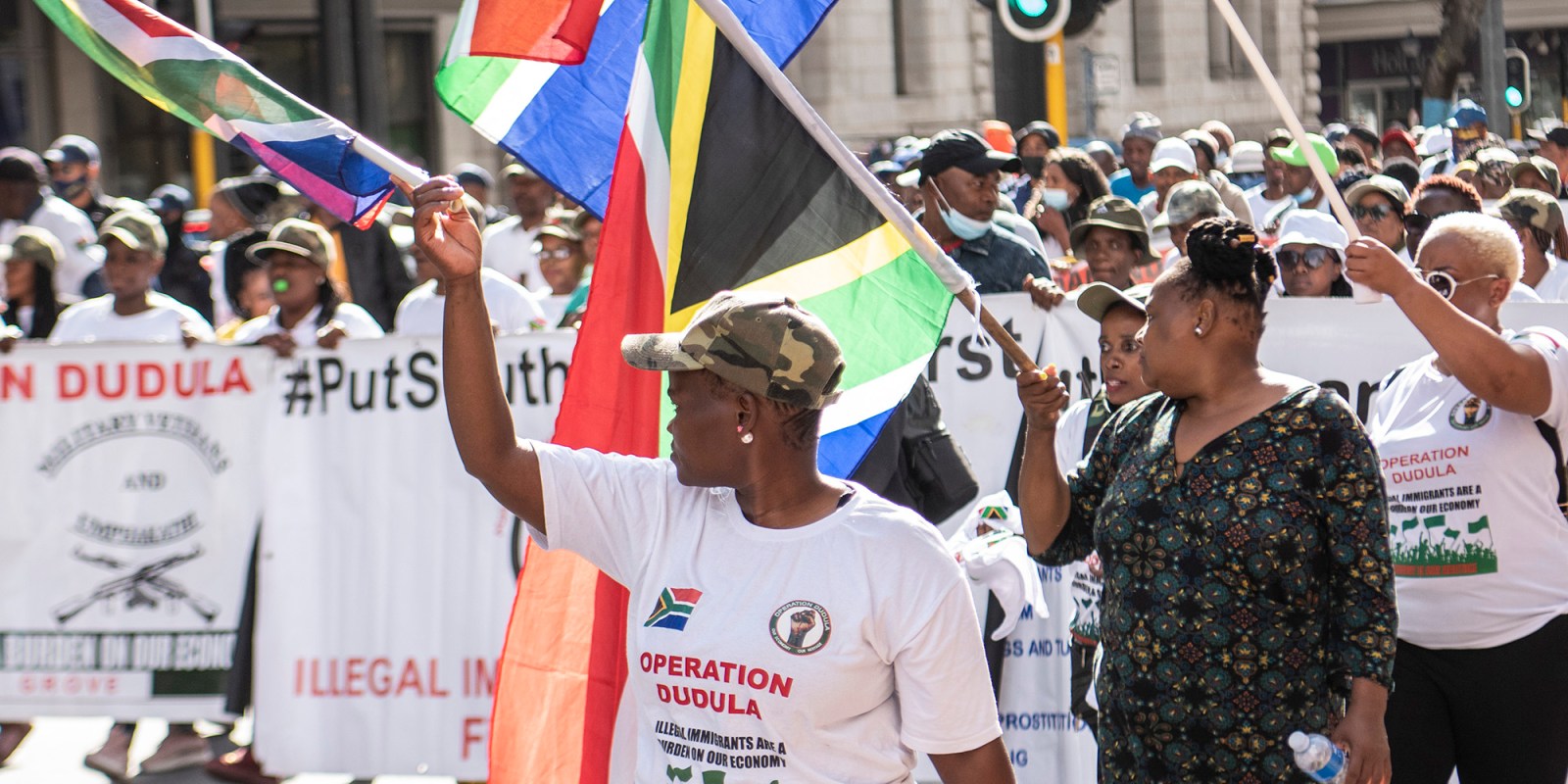 Just over a hundred protestors marched through the (CBD) Central Business District of Cape Town at the launch of the Western Cape branch of Operation Dudula a on May 14, 2022 in Cape Town, South Africa. Operation Dudula is a campaign against undocumented foreign nationals which was founded by Nhlanhla Lux. (Photo: Gallo Images/Brenton Geach)

According to the recent Social Cohesion Index compiled by the Inclusive Society Institute, the majority of South Africans remain committed to social cohesion as encapsulated in the national motto, ‘Unity in diversity’.

Social cohesion is a complex yet fundamental concept in South Africa. The agreement to pursue a single, coherent nation from the basis of division, the act of legitimising a deeply illegitimate system, has been the central sociopolitical aim of democracy. The drive towards social cohesion forms the basis for overcoming our divided past.

While social cohesion was central to national politics at the turn to democracy, it has become increasingly misconstrued. It has been rejected as passé. Instead of yielding to ahistorical crowds that dispel it as a soft issue, we should adopt a critical approach to recall its meaning and rejuvenate its purpose so as to ensure concrete and truly transformative outcomes.

Social cohesion is both a descriptive and prescriptive term. It describes a community of shared values and equal opportunity with relatively equal wealth and access to education, health and other services for all, a society based on social bonds and trust. If assessed only on the achievement of these markers, then vastly unequal South Africa remains a clear failure.

Since democracy, social cohesion has however largely been a prescriptive and aspirational term. It has served as the central political strategy of the post-apartheid sociopolitical order. Whereas division and discrimination were the modalities of governance under colonialism and apartheid, the transformation towards a cohesive and just society has been the overarching national strategy since the accord between political opponents gave rise to the democratic and constitutional order.

To deny the significant pressure from the radicals and conservatives, the political settlement of the early 1990s sought to maintain order and bypass statal disintegration. The fundamentally illegitimate state had to be procedurally legitimised. To do so, and to consolidate power in the state, political opponents agreed that South Africa’s future would be shared among all peoples in a single polity. This political design allowed for the conclusion of the negotiations and the resultant interim and final constitutions.

In its preamble and with its first words, “We, the people of South Africa”, the Constitution presents not only the foundational argument towards building something new. It surmounts the divided past by establishing the singular “We”. In doing so, the Constitution deftly delegitimises the previous order based on racial and social discord. It charges the government with the task of establishing policies that advance social cohesion.

As a technology that connects and coheres a society that was previously forced apart, the Constitution serves as a “bridge”. The Interim Constitution of 1993 refers to itself as a “historic bridge between the past of a deeply divided society characterised by strife, conflict, untold suffering and injustice, and a future founded on the recognition of human rights, democracy and peaceful coexistence and development opportunities for all South Africans”.

Together, the past and the future would belong to and be established by all people. Whereas the Constitution provides a normative as well as a structural guide for social development, the installation of non-racial democracy did not achieve transformation. Instead, by installing a social arrangement where for the first time all people were politically and legally equal, it allowed the potential to transform.

At the turn to democracy, social cohesion was seen as the foremost prerequisite for transformation. Today, with a new political arrangement and increased inequality, we require a critical approach with a new, operative vocabulary to ensure that transformation is significant and real.

Our dependence on outdated approaches has deferred our strategic transformation. The pageantry of social cohesion and nation-building has failed to attend to material concerns. Coupled with the escalation of national and international crises, nefarious actors are increasingly targeting national weaknesses. In South Africa, the rejection of social cohesion has taken several pathways.

Xenophobic nationalism is one such pathway. It sees locals taking out their socioeconomic grievances on migrants from other African countries. The central reasons for the mounting scourge of xenophobia are poverty and deprivation. The groundswell of Operation Dudula represents as much a rejection of the government’s ability to maintain law and order as it does a repudiation of undocumented migrants.

Apart from the frustrations raised by Dudula, there appears to be a more malignant, seditious movement of anti-constitutionalists who are threatening the South African order. This influential group rejects the political settlement of the early 1990s in favour of Radical Economic Transformation. The strategy of this grouping is to realign the governing party to more aggressive redistribution and away from the norms and values that underpin cohesion.

To this radical approach, the constitutional state was always a means to the ends of revolution. Legitimacy is determined by that which advances the materialist revolution, not the transformation as established at the political settlement.

This discredited, nefarious grouping is an existential threat to the people of South Africa and to the state itself. It is, therefore, critically important to rally around social cohesion. To rally around the values and principles of the Constitution.

According to the recent Social Cohesion Index compiled by the Inclusive Society Institute, the majority of South Africans remain committed to social cohesion as encapsulated in the national motto, “Unity in diversity”. It is encouraging that most South Africans agree that there is a reason and need for unity as a nation. More people agree than disagree that reconciliation is moving in the right direction.

While racial bias remains prevalent, it is declining, with nearly a third of South Africans still not associating themselves with people of other population groups. The trust needed to underpin social cohesion is, however, largely absent.

Though the wish for equity and cohesion remains among the different groups, the trust required is diminished. All groups feel that they deserve more, and that the government has failed to improve their lives. Despite the enormous challenges faced, studies such as the Social Cohesion Index suggest that South Africans believe in the Constitution and in a united future.