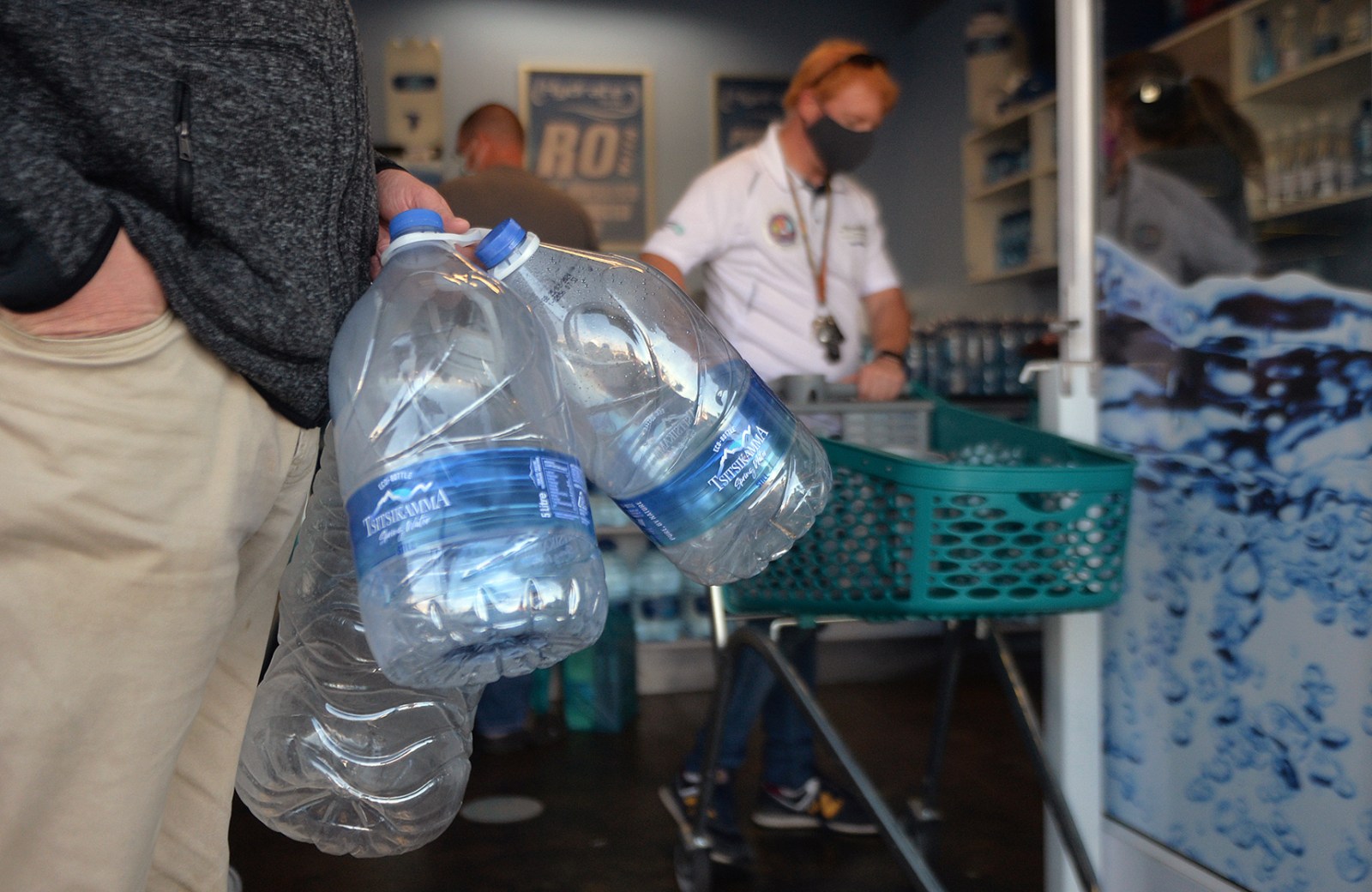 Residents in large parts of the Nelson Mandela Bay Metro in the Eastern Cape had to buy water in shops after pipe failures and other problems caused extensive outages in the metro. (Photo: Deon Ferreira)

Large parts of Nelson Mandela Bay ran dry on Wednesday and water pressure was much reduced in other parts after the metro was hit by a series of system failures and pipe bursts. On Wednesday night, the local business chamber called for a halt to political instability that was destroying the metro through service delivery failures.

With about 20 days to go before the first supply dam to Nelson Mandela Bay is set to fail, the metro suffered a series of water outages on Wednesday as pipes burst and the Nooitgedacht system was taken down for maintenance.

According to Nelson Mandela Bay’s water dashboard, the two main supply dams to the metro, the Churchill and Impofu dams, are set to fail in 20 and 27 days respectively.

Earlier in May, during a public meeting, Barry Martin, the metro’s water and sanitation boss, warned that one of the major problems with the Nooitgedacht Water Scheme, which brings water from the Gariep Dam in the Orange River to Nelson Mandela Bay, is that it has no spare capacity and if there is a failure the system will go down.

The Nooitgedacht scheme has been hailed as a “saving grace” for the metro, which is in the seventh year of a devastating drought. However, infrastructure projects that would allow water from this scheme to be available throughout the city and augment the Nooitgedacht water supply are lagging behind.

On Wednesday morning, the Nooitgedacht Water Treatment Works reduced its water supply output due to low levels of the Scheepersvlakte balancing dam, which supplies the treatment works with raw water.

Supply was restored, but the conditions were not sufficient for the Nooitgedacht Water Treatment Works to run at maximum capacity, the metro said in a statement released at mid-morning. This had caused reservoir levels to drop, the metro said, urging residents to use water sparingly and warning of low water pressure.

The treatment works was expected to resume full production by 7pm.

But earlier in the day, just before 9am, the pipeline from the Churchill Dam burst, with the water supply to some reservoirs in Gqeberha being cut off. Water tankers had to be deployed to several suburbs.

At 10am on Wednesday, the Groendal Water Treatment Works also had to be shut down after a raw water pipe burst. Without Nooitgedacht water on standby, residents were asked to keep water use to a minimum to avoid disruptions.

By 5pm, the metro said the Nooitgedacht Water Treatment Works was slowly increasing production through the plant. The Motherwell reservoir level had increased from 5% to 23%.

Because of the low water levels, the transfer booster pump stations had to be stopped briefly, which further interrupted the water supply to the western parts of the metro. The pumps were started again in the late afternoon.

Meanwhile, Mayor Eugené Johnson met with civil society organisations to explain what the city was doing to ward off Day Zero, according to her spokesperson, Tango Lamani.

On Wednesday night, at the annual general meeting of the Nelson Mandela Bay Business Chamber, the organisation’s president, Loyiso Dotwana, warned that the metro’s economy was at a tipping point and that basic service delivery was collapsing.

“We are either at the cusp of a fast descent to the bottom or at the beginning of a new way forward — where decisive actions are taken to fix what is broken and we can start to unlock new opportunities,” Dotwana said.

Political instability has given rise to a dysfunctional municipality, he said, highlighting that apart from the water crisis:

“The political and administrative leaders of the metro need to put their differences aside… and deliver the stability needed to get the metro working again,” he said.

“I must also emphasise the importance of our metro adopting a much more proactive approach to responding to what’s coming at us in the future.  Climate change, for example, needs to feature top of mind due to the massive risks that this poses, a prime example of which includes the recent extreme flooding and resultant infrastructure damage in KwaZulu-Natal.

“The chamber’s rapid assessment on the impact of climate change on Nelson Mandela Bay points to continued droughts, followed by storm surges and flooding becoming the normal weather pattern.

“Through our Eastern Cape Climate Change Coalition, we will be pushing for early warning systems to be in place, adequate disaster management planning, enabling the Baakens River Valley and Swartkops estuaries to become natural carbon sinks and the implementation of other critical mitigation measures.”

The chamber also announced a resurgence campaign, directed at driving positivity and inspiring action, while acknowledging what the various stakeholders could influence and control, the organisation’s CEO, Denise van Huyssteen, said at the meeting. DM/MC