Protesters demand action against xenophobia in picket a... 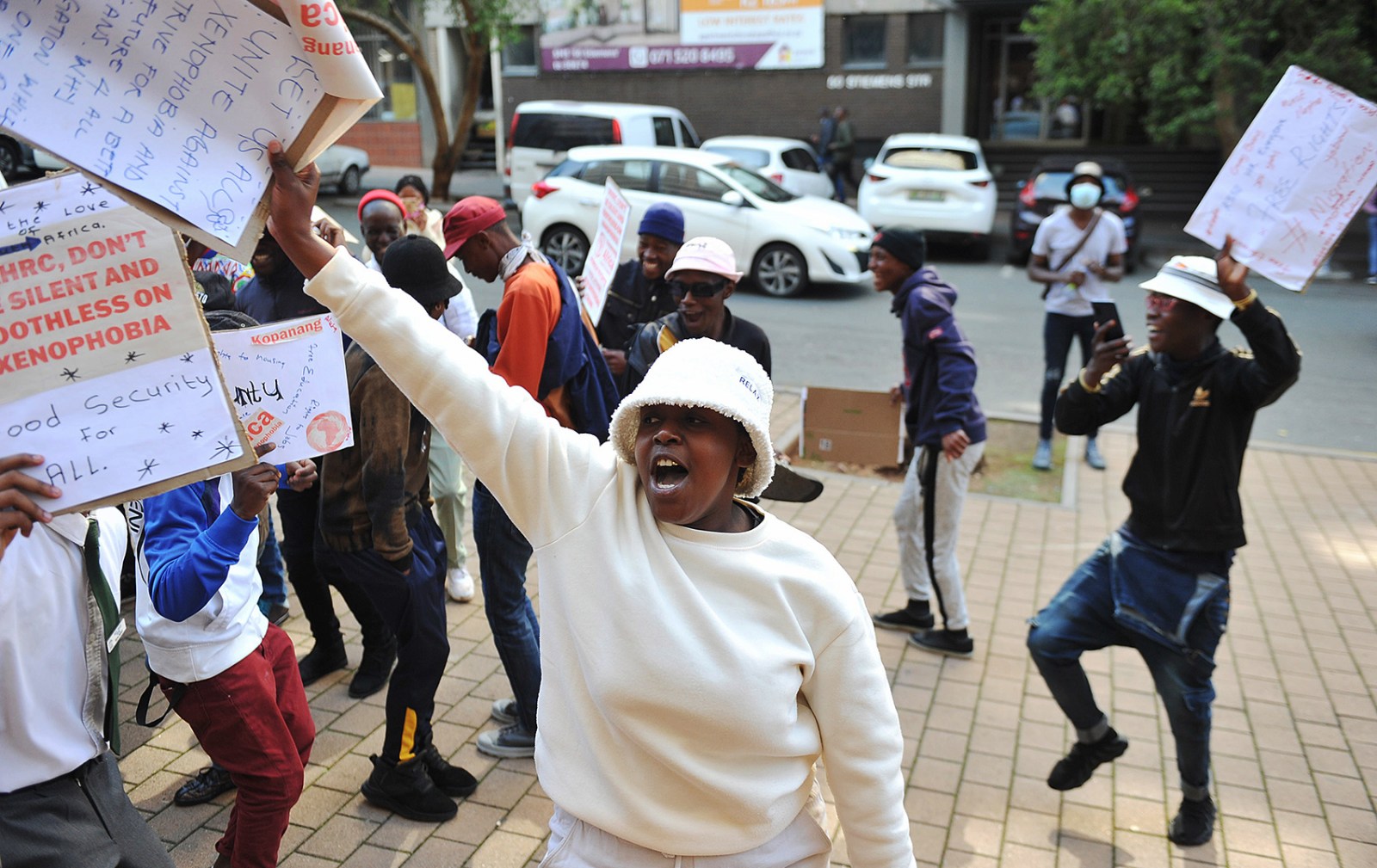 Learners from Mpontsheng, Eketsang and Ponego secondary schools and other protesters sing and dance at the picket against xenophobia at the Johannesburg SAHRC offices on Wednesday. (Photo: Denvor de Wee)

Kopanang Africa Against Xenophobia said it held a picket at the South African Human Rights Commission (SAHRC) offices in Braamfontein on Wednesday because of growing xenophobic sentiment in the country.

Kopanang said the SAHRC “is failing to adequately play its role as a Chapter 9 institution to guard our democracy”.

“The SAHRC is failing to use its legitimacy, power and mandate to halt the current trajectory towards intolerance and violence towards fellow Africans.”

The protest was made up of learners from Katlehong secondary schools including Mpontsheng, Eketsang and Ponego which, according to the organisation, are among communities affected by xenophobia.

Showing solidarity with the picket were civil society organisations such as Lawyers for Human Rights, Keep Left, Fighting Inequality Alliance and the Consortium for Refugees and Migrants in South Africa (CoRMSA).

Kopanang spokesperson General Moyo told Maverick Citizen that the learners had received permission from their schools to attend the picket and that Africa Day presented an opportunity for them to be educated about the destructive nature of xenophobia.

“In school and in class, the learners do not see any difference amongst themselves… This penetration in communities by the likes of Operation Dudula is misleading and confusing the youngsters, and we know that in the township, the vulnerable ones are the young ones,” said Moyo.

“In school, there are learners that come from other countries… It doesn’t mean that they do not deserve the education that we are getting, so we must make sure that they get equal rights,” said 16-year-old Grade 10 pupil from Mpontsheng Secondary School, Thandekile Dlamini.

“Let us all proudly call ourselves African with unity — we cannot be Africans without unity… it is the key to a better country.”

“We need to stand up against Operation Dudula and stop them from ripping our families apart and stop tearing apart the poor people’s economy, because that is all they’re breaking down — the working-class communities.”

Handing over the memorandum from Kopanang was CoRMSA director Thifulufheli Sinthumule, who shared his experiences of xenophobia.

“I get stopped and asked, ‘are you a South African?’ because of my colour, my body structure and then my name, of course…

“We are aware that many complaints have been lodged, providing evidence and information of political leaders who brazenly act in defiance of recommendations as set out in the report that was published in 2009.

“We are also concerned that the SAHRC conducted hearings into xenophobia in our country in 2018 — with representatives from government reporting to the commission under oath — and to date, those hearings and recommendations are yet to be published and are yet to be enforced.”

Some of the key recommendations in the Kopanang memorandum include:

Receiving the memorandum was advocate Tseliso Thipanyane, head of the SAHRC. Addressing the picketers, he said:

“I want to admit as the CEO of the Human Rights Commission that we could have done much better.”

He conceded that the report on the 2018 hearings had not yet been made public, but that the commission had met last week to discuss its release soon.

“We have proposed to our principals that there must be an urgent national summit to discuss the challenges around non-nationals in our country because we are quite concerned as to the implications for our country and for our democracy and for us as Africans.

“We are quite clear that human rights are for all people, regardless of who you are, where you come from and what you do.

“It is quite unfortunate what is happening today, and seeing that the targeting of so-called non-nationals is largely by black people, this shows a worrying development of self-hatred in our country,” said Thipanyane. DM/MC