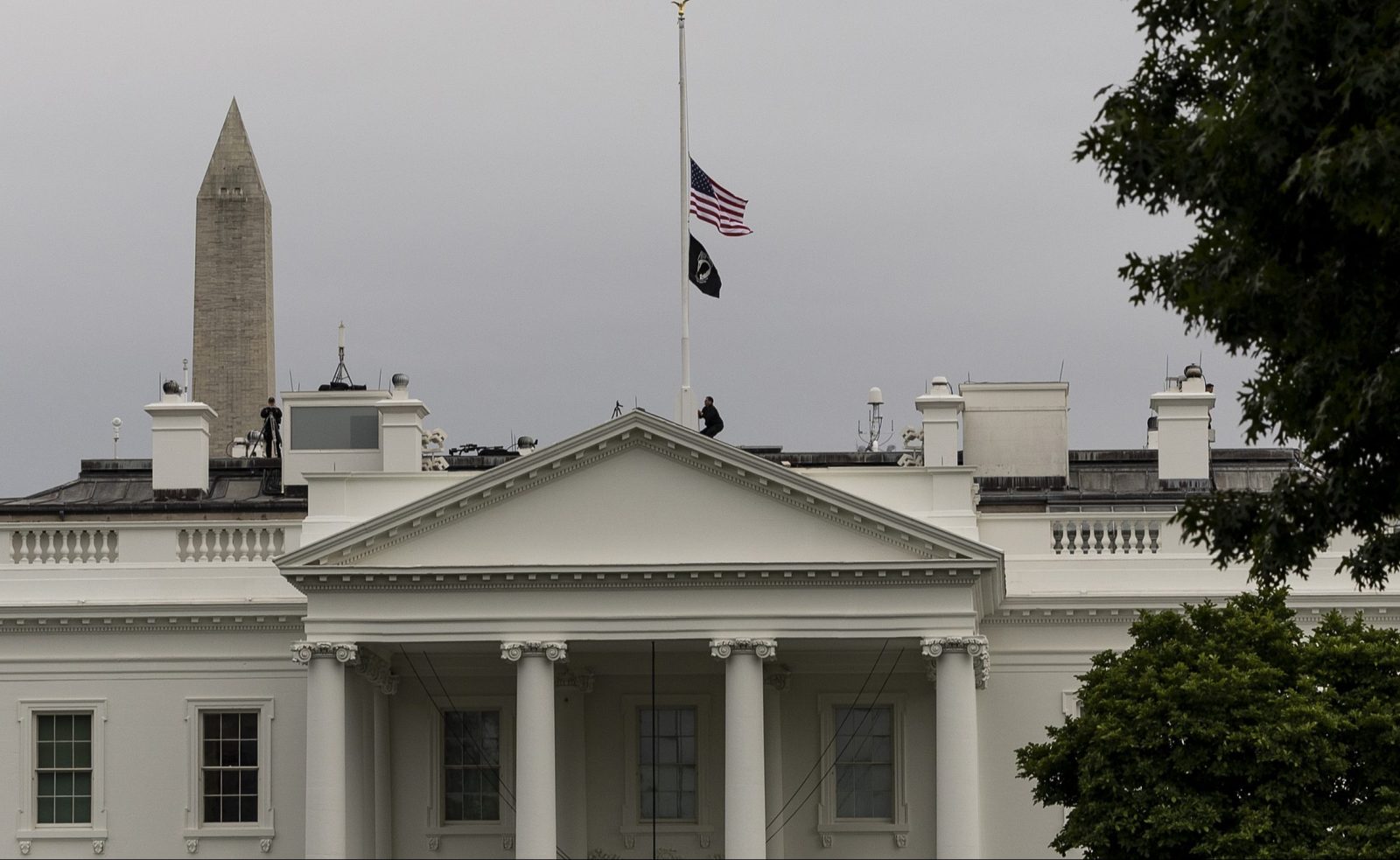 A US Secret Service officer lowers the American flag over the White House following the recent mass shooting at a Texas elementary school on 24 May 2022 in Washington, DC. (Photo: Anna Moneymaker / Getty Images)

The shooter, an 18-year-old, was killed by responding officers, Governor Greg Abbott said during a briefing on Tuesday.

President Joe Biden mourned the killing of at least 19 children and two teachers in a mass shooting at a Texas elementary school on Tuesday, decrying their deaths as senseless and demanding action to try to curb the violence.

“I hoped, when I became president, I would not have to do this again,” Biden said at the White House, in sometimes halting, emotional remarks. “Another massacre in Uvalde, Texas. An elementary school. Beautiful, innocent, second, third and fourth graders.”

Across the US, anger overflowed among Americans who have long demanded, to no avail, that federal lawmakers do anything to prevent gunmen from perpetrating horrific violence, especially against children. After the Sandy Hook slayings, President Barack Obama and Senate Democrats sought to pass new gun-control measures only to see the legislation blocked by Republicans, who have suffered no electoral consequences for their opposition to even modest restrictions on civilian weaponry.

A professional basketball coach, Steve Kerr of the National Basketball Association’s Golden State Warriors, channeled the rage in a news conference Wednesday in which he was expected to discuss his team’s prospects in a playoff matchup against the Dallas Mavericks. Instead, he lambasted Republicans for their intransigence.

“Any basketball questions don’t matter,” he said, recounting the violence in Uvalde, Buffalo and elsewhere and raising his voice to demand, “When are we going to do something?”

“I ask you, Mitch McConnell, and ask all of you senators who refuse to do anything about the violence, the school shootings, the supermarket shootings, I ask you: Are you going to put your own desire for power ahead of the lives of our children, our elderly and our churchgoers?”’ Kerr said, naming the Senate Republican leader. “Because that’s what it looks like.”

Kerr’s father was shot to death in Beirut in 1984, according to the Washington Post.

Biden was briefed on the Uvalde shooting aboard Air Force One as he returned to Washington from a trip to South Korea and Japan. He ordered US flags to be flown at half-staff through May 28 and also called Texas Governor Greg Abbott to offer federal assistance.

Reflecting on his trip to the two Asian democracies, Biden said, “What struck me was these kinds of mass shootings rarely happen anywhere else in the world.”

“Why? Why are we willing to live with this carnage?” he asked.

The president, who lost one of his children in a car accident and another to cancer, expressed condolences to Uvalde parents who, he said, “will never see their child again, never have them jump in bed and cuddle with them.

“Parents who will never be the same,” he said. “To lose a child is like having a piece of your soul ripped away.”

The anniversary of the death of Biden’s son Beau, who was 46 when he succumbed to brain cancer in 2015, is on Monday.

Biden lamented that classmates of the killed and injured children who witnessed the attack, “as if they’re on a battlefield, for God’s sake,” would grow up traumatized.

With gun control legislation stalled on Capitol Hill, the president has little to offer but yet another call to action and grief for the victims’ families. Biden didn’t call for specific measures but said that when the US had an assault-weapons ban in place, from 1994 to 2004, mass shootings declined, and then “tripled” after the law expired.

“Don’t tell me we can’t have an impact on this carnage,” he said.

Democrats have repeatedly tried and failed to enact new gun-control measures — including universal background checks and an assault weapons ban — in the decade since Sandy Hook.

Connecticut Democrat Chris Murphy, who was elected to the Senate a month before the Sandy Hook shooting, delivered an angry, impassioned speech on the Senate floor imploring Congress to pass gun-control legislation.

“Our kids are living in fear every time they set foot in a classroom because they fear they will be next. What are we doing? Why do you spend all this time running for the United States Senate?” he asked. “Why do you go through all the hassle of getting this job and putting yourself in a position of authority if your answer, as the slaughter increases and our kids run for their lives, is we do nothing?”

Multiple proposals have been blocked by Republicans and a handful of centrist Democrats.

“It’s time for those who obstruct or delay or block the common-sense gun laws, we need to let you know that we will not forget,” Biden said. “We can do so much more.”

Republican Senator Jim Inhofe of Oklahoma said he could conceive of no legislation that would prevent attacks like Uvalde.

“It would be very difficult,” he said. “You’re talking about millions of people out there, and there have got to be some screwballs that are just totally unpredictable. And there’s no way to identify who they are. So none that I can think of.”

Legislation expanding gun background checks to sales at gun shows and online cleared the Democrat-led House in March of last year on a 227-203 vote and a second bill cleared, 219-210, that would prevent gun sales from proceeding if a background check isn’t completed within three days as allowed under current law.

But in the 50-50 Senate, where at least 10 Republican votes are needed to muscle past a filibuster, both measures stalled. Murphy and a few Republican senators engaged in talks over a bipartisan compromise requiring background checks on commercial gun sales. But they collapsed after GOP Senator John Cornyn exited the negotiations; Murphy said they weren’t bearing any fruit as lawmakers wrestled over the definition of “commercial” sales.

Tuesday’s massacre at Robb Elementary School is the latest in a string of mass shootings that have rocked the country. Just 10 days ago, a gunman in Buffalo, New York, opened fire at a supermarket, killing 10 people in a racist attack.

The attack in Uvalde, which is about 80 miles (130 kilometers) west of San Antonio, is the most deadly US school shooting since a gunman killed 26 people, most of them first-graders, at the Sandy Hook elementary school in Newtown, Connecticut, in 2012.

The shooter, an 18-year-old, was killed Tuesday by responding officers. Texas State Senator Roland Gutierrez, a Democrat from the region, said in an MSNBC interview that the man had bought his weapons legally on his 18th birthday.

Two police officers were shot but not hurt seriously, governor Greg Abbott said at a press briefing on Tuesday. The last time a school shooting resulted in such a death toll was in February 2018 at Marjory Stoneman Douglas High School in Parkland, Florida, when 17 perished.

The shooting occurred in the town of Uvalde, a community of about 16,000 residents 137km west of San Antonio, the Lone Star State’s second-largest city. The shooter was armed with a handgun and possibly a rifle, the governor said. Bloomberg/DM