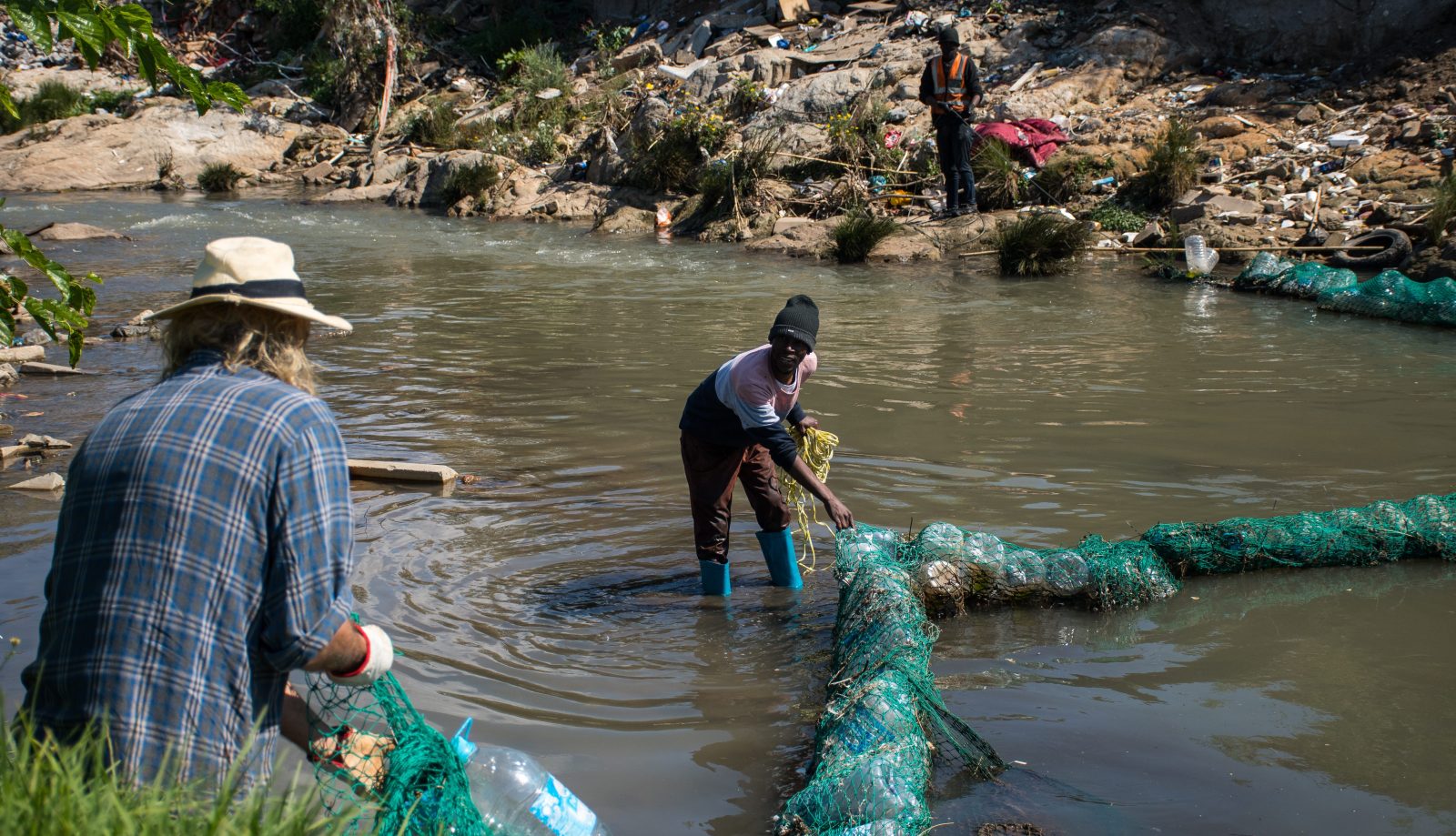 Sibusiso Sangweni (centre) helps to set up the pollution trap on the Jukskei River in Alexandra with Willem Snyman (left) and Nhlangano Zwane on 29 April 2022. (Photo: Julia Evans)

‘Water is our oldest resource,’ says Paul Maluleke, a volunteer with the Alex Water Warriors, who are now deploying a nifty device to snare sewage and plastic in the Jukskei.

Living on the banks of a river polluted by tonnes of plastic and sewage, residents of Alexandra in Johannesburg have taken it upon themselves to protect their oldest resource.

In March 2022 – World Water Day – members of Alexandra Water Warriors, along with environmental and empowering organisations, set up a pollution trap on the Jukskei River opposite the Alexandra cemetery to catch plastic bottles and polystyrene floating on the surface.

Willem Snyman, of the environmental conservation organisation Fresh, who has been experimenting with river traps on the Hennops River for about three years, helped build the trap in Alex.

He says the trap empowers the local volunteers to catch and remove pollution.

“In a way, it also just exposes the problem. Normally you don’t really see it, it just goes past,” he told Daily Maverick.

Now, using the trap, the warriors collect at least 50 bin bags full of waste every week, which is taken to Pikitup, the City of Johannesburg’s waste management company.

The warriors try to separate recyclable material that isn’t water damaged and take it to a recycling company, but it’s a work in progress with more plans under way.

Sibusiso Sangweni, a tourism development officer in Alexandra, helped initiate the Alexandra Water Warriors after realising that “we need to bring tourists here, but when tourists come they ask about the river”.

With Paul Maluleke, founder and CEO of the Greater Alexander Tourism and Heritage Association, they began developing the Water Warriors in September 2021 and now have 250 volunteers from the surrounding community.

Mary Ngobeni joined the Alex Water Warriors because of South Africa’s water scarcity problem and she is worried about her children’s future.

When asked if she becomes disheartened in the face of so much pollution and social problems, Ngobeni said she won’t give up, adding: “I’m telling myself that, one day, everything will come alright.”

Bridget Ndobela joined Alex Water Warriors because “I want my kids to live in a nice area”. She volunteers four hours of her day twice a week without payment, but said: “I don’t care because I believe one day… something will come of it.”

Maluleke is a third-generation Alexandra resident – his grandfather was born there in the 1930s.

He reflects that “Alex on its own has a bad stigma”, but wants to be part of the transformation and encourage his community to take responsibility for their surroundings.

“We need to tell our own stories as low-income communities. Because we believe that since 1994 we don’t hear our true stories out there.

“We also needed to learn as communities to be independent. For so many years we’ve been relying on the government and other institutions. But now we must learn to manage our resources.”

The project, however, has not been without setbacks.

The trap had been up for two weeks before it was damaged by heavy floods, so on 29 April, Snyman, the Water Warriors and Faaizah Mohomed and her 12-year-old son Khaleel Akoojee went to repair it. Mohomed and Khaleel had built a trap downstream from Alex in their neighbourhood, Buccleuch, a few years ago and wanted to help another community.

But they were held up at gunpoint and their car was stolen.

Still shaken, Mohomed said they had come to get involved in the project. Khaleel, who was seven when he first built a pollution trap for a school project, said he came to Alexandra to set up the trap because “this is where the centre of the dirt is coming from”.

Floods in November 2016 had left the Jukskei River in Buccleuch filled with pollution. By April 2017 it had still not been cleaned so residents decided to do something about it.

Mahomed and her family joined the clean-up and began to think about solutions to river pollution. In her research, Mahomed discovered the idea of using milk bottles as litter skimmers, and decided that along with benefiting the environment, it would be a good project for her children for their school’s science expo.

They collected milk bottles at home and a few months later, with help from his grandfather, Ali Bhai Mohomed, Khaleel and his sister Hanaan (now 16) built the first prototype of their “river dirt catcher barrier”.

By July 2017 they had collected 49 bags of waste stopped by the trap.

For their efforts the siblings won the environmental management award at the Eskom Expo for young scientists in 2017 and took bronze in the Enviropaedia Eco-Logic Awards in 2018.

Khaleel explained that he built his “dirt catcher 2.0” by covering plastic bottles with netting, while a pulley meant they didn’t have to wade into the river to collect the trapped material.

“The good thing about this project is that it is made out of recycled materials – it’s a cheap, efficient way of stopping [waste],” said Mohomed.

Khaleel, who attends the Qurtuba Islamic Academy, said he cared about cleaning up the river and looking after the environment because we only get one Earth.

Source of the problem

The pollution trap is a great way to collect pollution and raise awareness, but it doesn’t address the root of the problem.

Pollution in the Jukskei River is a multifaceted, generational problem influenced by population expansion, illegal dumping and overwhelmed service and infrastructure.

Lori Coogan, the DA ward councillor for part of Alexandra, Buccleuch,  Marlboro and Marlboro Gardens, told Daily Maverick: “The litter pollution is just one aspect of what has to change in the Jukskei River.”

She explained that raw sewage runs into the river from informal dwellings on its banks, leaks from blockages in the township, and even sewage leaks from hijacked buildings in Marlboro South.

As in many areas in South Africa, many informal settlements aren’t connected to proper water and sanitation facilities and aren’t serviced by refuse collection, but, Coogan says, this area does have water standpipes, ventilated improved pit (VIP) toilets and skips for refuse and daily refuse collection.

Maluleke says they often see trucks from construction sites in Sandton illegally dumping rubble onto the riverbanks. They reported this to the media, the Johannesburg Metropolitan Police Department and councillors – “we make noise every day”.

Tired of constantly being ignored, “us, as a community, said, you know what, we are going to clean the river ourselves”.

To make matters worse, Coogan said, informal houses have been built within floodlines on the dumped construction rubble, which has narrowed the course of the river in places.

Living within floodlines and on floodplains is not only detrimental to the environment but poses a health and safety risk for residents and they are more prone to flooding.

“It’s not sustainable in its current form. And it also means that not only is the environment seriously degraded, but people are living an unacceptable quality of life,” said Coogan.

Mahomed says she hopes the project with the Alexandra Water Warriors will change residents’ mindset.

“These Alex Warriors are heroes, because they are the start of the revolution of changing the whole mindset of the community to be more proud of the river.”

“We as Alex Water Warriors, we’re going to be the water monitors monitoring people, teaching people that they mustn’t dump in the river,” said Sangweni, standing knee-deep in the river, helping to repair the trap.

Sangweni said the Warriors want to be part of educating residents about their environment, recycling and pollution, and help to provide real solutions.

Coogan said they need to come up with a sustainable plan for a more hygienic and better quality of life.

“I believe we can improve the situation considerably,” she said. “I think the very important thing is to start looking at an upward trajectory and trying to work out solutions that have a positive impact on the people who are living there… so that both they and their children can have a better environment to live in.”

Nodbela, who has lived in Alex most of her life, said: “I know a lot of people don’t care. But they must know that our generation must see this place clean.” DM/OBP