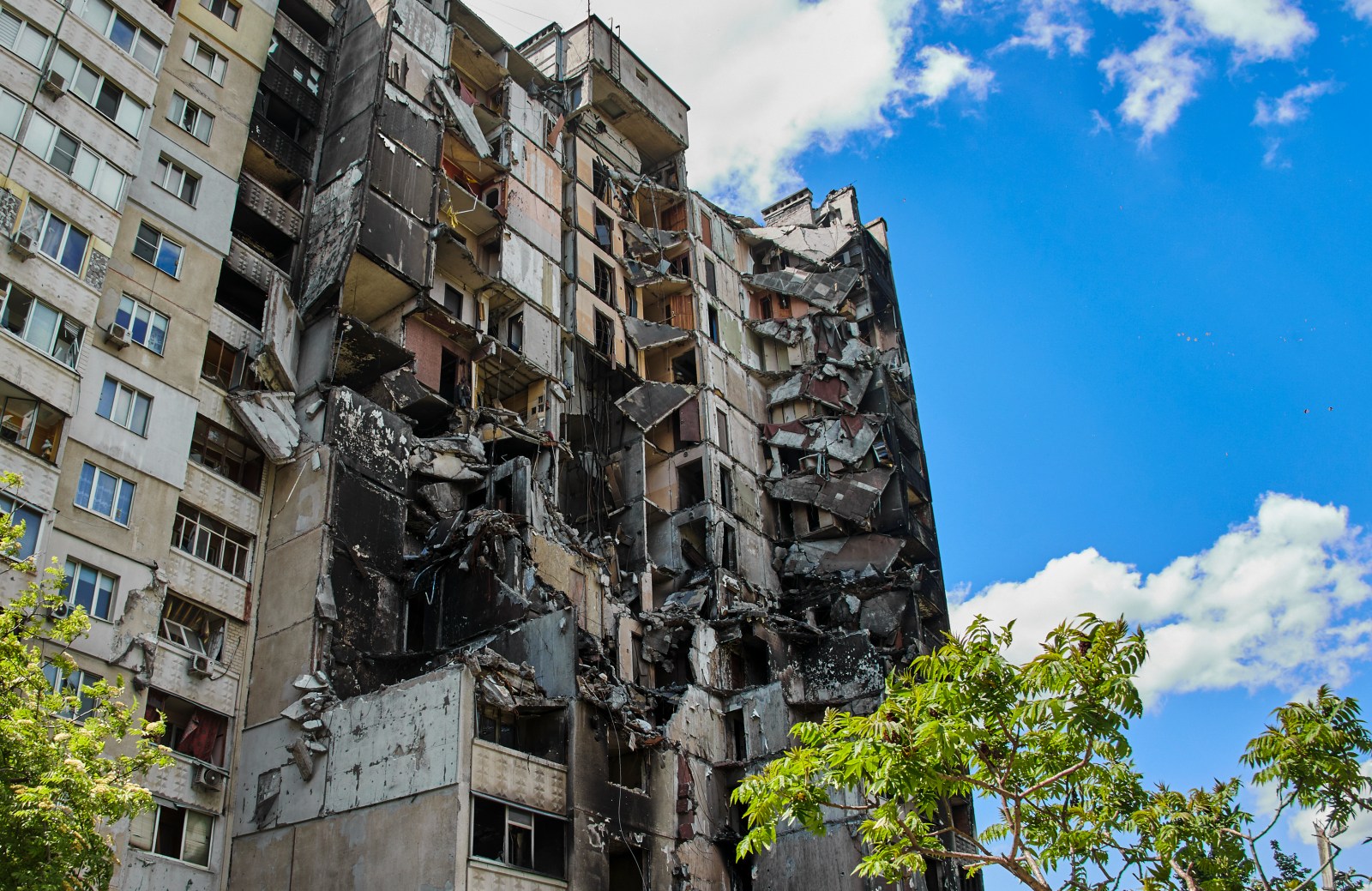 A residential building partially destroyed by shelling in the Nord Saltivka district in Kharkiv, Ukraine, 23 May 2022. Kharkiv, Ukraine's second-largest city, and surrounding areas had been the target of shelling and airstrikes from Russian forces. Though Russian troops were recently pushed back by the Ukrainian army, many citizens are left homeless now. On 24 February Russian troops invaded Ukraine causing fighting and destruction and a humanitarian crisis. EPA-EFE/SERGEY KOZLOV

KYIV/SLOVYANSK, Ukraine, May 24 (Reuters) - Russian forces were launching an all-out assault to encircle Ukrainian troops in twin cities straddling a river in eastern Ukraine on Tuesday, a battle which could determine the success or failure of Moscow's main campaign in the east.

Exactly three months after Russian President Vladimir Putin invaded Ukraine, authorities in the second-largest city Kharkiv were expected to open the underground metro, where thousands of civilians had sheltered for months under relentless bombardment.

The reopening is a symbol of Ukraine’s biggest military success over the past few weeks: pushing Russian forces largely out of artillery range of Kharkiv, as they did from the capital Kyiv in March.

But the decisive battles of the war’s latest phase are still raging further south, where Moscow is attempting to seize the Donbas region of two eastern provinces, Donetsk and Luhansk, and trap Ukrainian forces in a pocket on the main eastern front.

The easternmost part of the Ukrainian-held Donbas pocket, the city of Sievierodonetsk on the east bank of the Siverskiy Donets river and its twin Lysychansk on the west bank, have become the pivotal battlefield there, with Russian forces advancing from three directions to encircle them.

“The enemy has focused its efforts on carrying out an offensive in order to encircle Lysychansk and Sievierodonetsk,” said Serhiy Gaidai, governor of Luhansk province, where the two cities are among the last territory still held by Ukraine.

“The intensity of fire on Sievierodonetsk has increased by multiple times, they are simply destroying the city,” he said on TV, adding there were about 15,000 people in the city and the Ukrainian military remains in control of it.

Reuters journalists in the Donbas, who reached Bakhmut further west, heard and saw intense shelling on the highway towards Lysychansk on Monday. Ukrainian armoured vehicles, tanks and rocket launchers were moving towards the front lines, with and buses carrying soldiers.

Further west in Slovyansk, one of the biggest Donbas cities still in Ukrainian hands, air raid sirens wailed on Tuesday morning but streets were still busy, with a market full, children riding on bikes and a street musician playing violin by a supermarket.

Two empty public transport buses were driving towards the frontline town of Lyman to evacuate civilians from heavy shelling there, escorted by police and a military car.

‘WHO WILL BURY THEM?’

Gaidai said Ukrainian forces had driven the Russians out of the village of Toshkivka just to the south of Sievierodonetsk. That could not be independently confirmed. Four people had been killed in the shelling of one home in Sievierodonetsk overnight.

The battle there follows the surrender last week of Ukraine’s garrison in the port of Mariupol after nearly three months of siege in which Kyiv believes tens of thousands of civilians have died.

Petro Andryushchenko, an aide to Mariupol’s Ukrainian mayor now operating outside the Russian-held city, said on television the dead were still being found in the rubble there.

Around 200 decomposing bodies were found buried in rubble in a basement of one high-rise building, he said. Locals had refused to collect them and Russian authorities had abandoned the site, leaving a stench across the district.

Russia is now in control of an unbroken swathe of eastern and southern Ukraine, but has yet to achieve its objective of seizing all of Luhansk and Donetsk.

Russia’s three-month long invasion, the biggest attack on a European state since 1945, has seen more than 6.5 million people flee abroad, turned entire cities into rubble and brought down severe economic sanctions on Moscow.

In neighbouring Moldova, where a pro-Western government has warned of a risk unrest could spread to a border region controlled by pro-Russian separatists, investigators searched the office and home of pro-Russian former president Igor Dodon.

Local media reported the searches were in connection with an investigation into alleged corruption and treason. Dodon’s Socialist Party said accusations against him were baseless.

In Russia itself, where criticism of the war is banned and independent media has been shut, jailed opposition leader Alexei Navalny used a court appearance by video link from a prison colony to denounce the “stupid war which your Putin started”.

“One madman has got his claws into Ukraine and I do not know what he wants to do with it – this crazy thief,” Navalny said.

At a cemetery outside Mariupol, treading through long rows of fresh graves and makeshift wooden crosses, Natalya Voloshina, who lost her 28-year-old son in the fight for the city, said many of Mariupol’s dead had no one left to honour their memory.

“Who will bury them? Who will put up a plaque?” she asked.

“They have no family.”

(Reporting by Oleksandr Kozhukhar in Lviv, Pavel Polityuk and Natalia Zinets in Kyiv, and Reuters journalists in Mariupol and Slovyansk; Writing by Peter Graff; Editing by Nick Macfie and Jon Boyle)