Rise in drug use at schools sparks call for united effo... 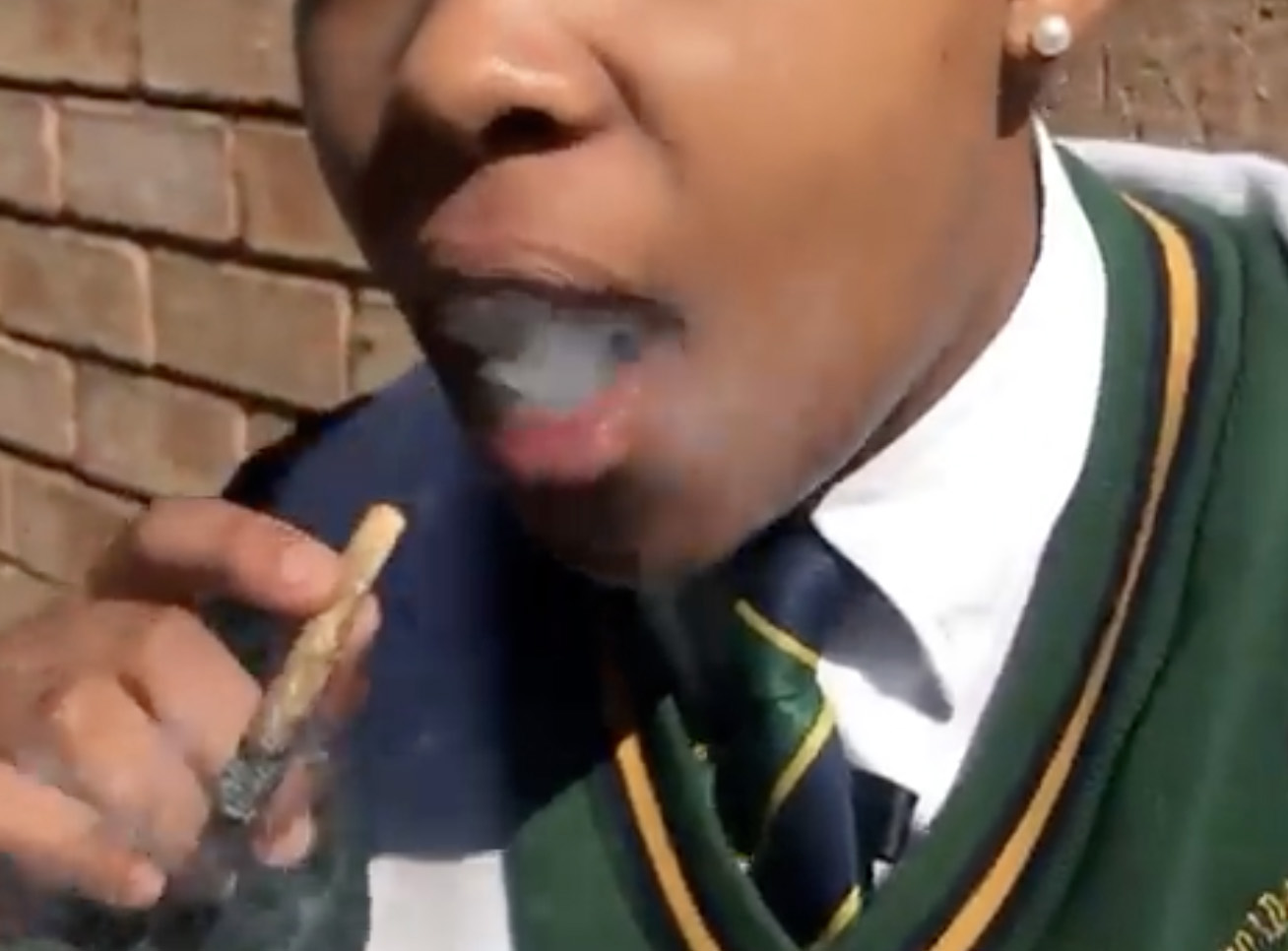 Pupils from 36 Leondale Secondary School in Ekurhuleni were caught on video smoking dagga on the school premises. (Photo: Screengrab)

Experts say a collaboration between schools, parents and the community is the best approach to curb drug use among pupils.

The viral “dagga day” video of pupils from 36 Leondale Secondary School in Ekurhuleni smoking cannabis has highlighted the challenge of controlling substance abuse at schools.

A recent study by the National Institute on Drug Abuse confirms an increase in substance abuse by pupils.

Anecdotal evidence suggests that today’s adolescents are more willing to experiment with drugs thanks to products such as vape pens and hookah pipes as well as more relaxed societal attitudes to certain substances, such as cannabis.

Cannabis in South Africa has been decriminalised by the Constitutional Court for personal consumption by adults in private. It is still illegal for anyone under 18 to consume, but it remains by far the most used drug on South African streets, specifically by young people.

Thembekile Msane, spokesperson for the South African National Council on Alcoholism and Drug Dependence (Sanca), confirmed the increase in substance abuse such as cannabis by schoolchildren.

“The use of cannabis has become more problematic since its decriminalisation in 2019. Sanca has seen an increase in admissions to our centres for under-18s using cannabis,” he told DM168.

The 36 Leondale Secondary children now await their fate after disciplinary hearings last month, which by the Gauteng education department oversaw. This is in connection with a video posted on 20 April, in which the pupils are seen dancing and smoking cannabis on what they called “dagga day or 4/20”. They are in uniform on the school grounds, where they are supposed to be supervised.

Earlier in April, 11 Grade 12s from Randfontein High School on the West Rand and four matrics from Mamellong Secondary School in Ekurhuleni were admitted to hospital when they became sick after consuming cannabis-laced edibles, so-called “space cakes” or “space cookies”, that they had bought from other pupils at school.

The Department of Basic Education (DBE) confirmed to DM168 that the surge in drug use at schools is a growing concern.

“We receive incidents of drug use in schools at least every day. One case already is one too many,” said DBE spokesperson Elijah Mhlanga.

The South African Schools Act declares that, if a pupil is found in possession of drugs or is intoxicated at school, the necessary disciplinary action will be taken, possibly including suspension, expulsion or the involvement of the police.

In most instances, however, the responsibility for dealing with the issue of drugs is left to the school governing body.

Juané van der Merwe, legal services manager at the Federation of Governing Bodies of South African Schools, acknowledged the increase in cannabis use at schools and the responsibility that school governing bodies have in that regard: “We frequently receive enquiries from our members regarding how to deal with learners who are under the influence or in possession of drugs, more specifically cannabis.”

She said that often their recommendation is that “offenders ought to be treated in such a manner that would assist them in overcoming their drug dependency in an environment that is conducive to reform, as opposed to an environment filled with perpetrators of far more serious crimes”.

The appropriate response to a pupil found in possession of an illegal drug or who has tested positive for an illegal drug is to address the issue, first and foremost, with the parents and, if so requested, to refer the child for counselling and to a rehabilitation centre, Van der Merwe said.

Mhlanga said there are many measures in place to ensure drug-free schools, including the School Safety Programme, a collaborative effort between the DBE, the South African Police Service, the departments of social development and health, school governing bodies, anti-drug organisations, parents, the community and pupils to fight substance abuse in schools.

The programme worked best when parents and the community participated fully: “In cases where parents and community are actively involved and are having serious conversations with their children, it does yield results.”

In April, former DA leader Mmusi Maimane criticised the measures in place to ensure drug-free schools, saying on Twitter: “How have we reached this level of behaviour in our schools? How do we solve our schools’ crisis? We need a clear plan and solid leadership. That is currently lacking which is why this is happening.”

He suggested that his “brilliant and practical” Solid Foundations SA Education Rescue Plan be adopted, which would lead to a change in “less than five years”. It includes a list of interventions to increase the pass mark and equal education opportunities.

In response to Maimane’s statement, the DBE pinned the responsibility for alleviating drugs in schools on pupils’ homes and parenting.

“Discipline and social behaviour are taught at home. The parents must take responsibility,” tweeted Mhlanga.

Just like the measures to ensure school safety, those to prevent and address the drug problem in schools and interventions for the well-being of addicted children are proving to be reactive rather than preventative, as is demonstrated by the growing number of incidents of drug use in schools.

Msane said teenagers’ use of marijuana relates to the developmental stage in which they seek autonomy and independence.

“They are more open to experimentation during this stage. The environmental and societal influences further create an environment where it is socially acceptable…

“Individual factors play a role, such as the personality of the child, the traumas, what they have been exposed to, and the easiest way to gain popularity among their peers.”

Sanca’s Msane said drugs affect brain function: “Cannabis mainly affects coordination and memory… but the biggest concern for us is the effect on the developing brain. Especially the frontal cortex, which only fully develops at 25 to 27 years of age. This part is responsible for logical thinking and good decision-making processes. Any chemical affects the chemistry in the brain and affects its functioning.”

“With poor discipline still a big challenge for education in South Africa, the unique approach of the value-driven school’s project is a lifeline to schools. The shift in focus from rules to values means that learners, teachers and other role-players in the school community take more responsibility for their conduct… School environments that promote a set of accepted values and ethical behaviour will prevent incidents like the one at Leondale,” she said. DM168