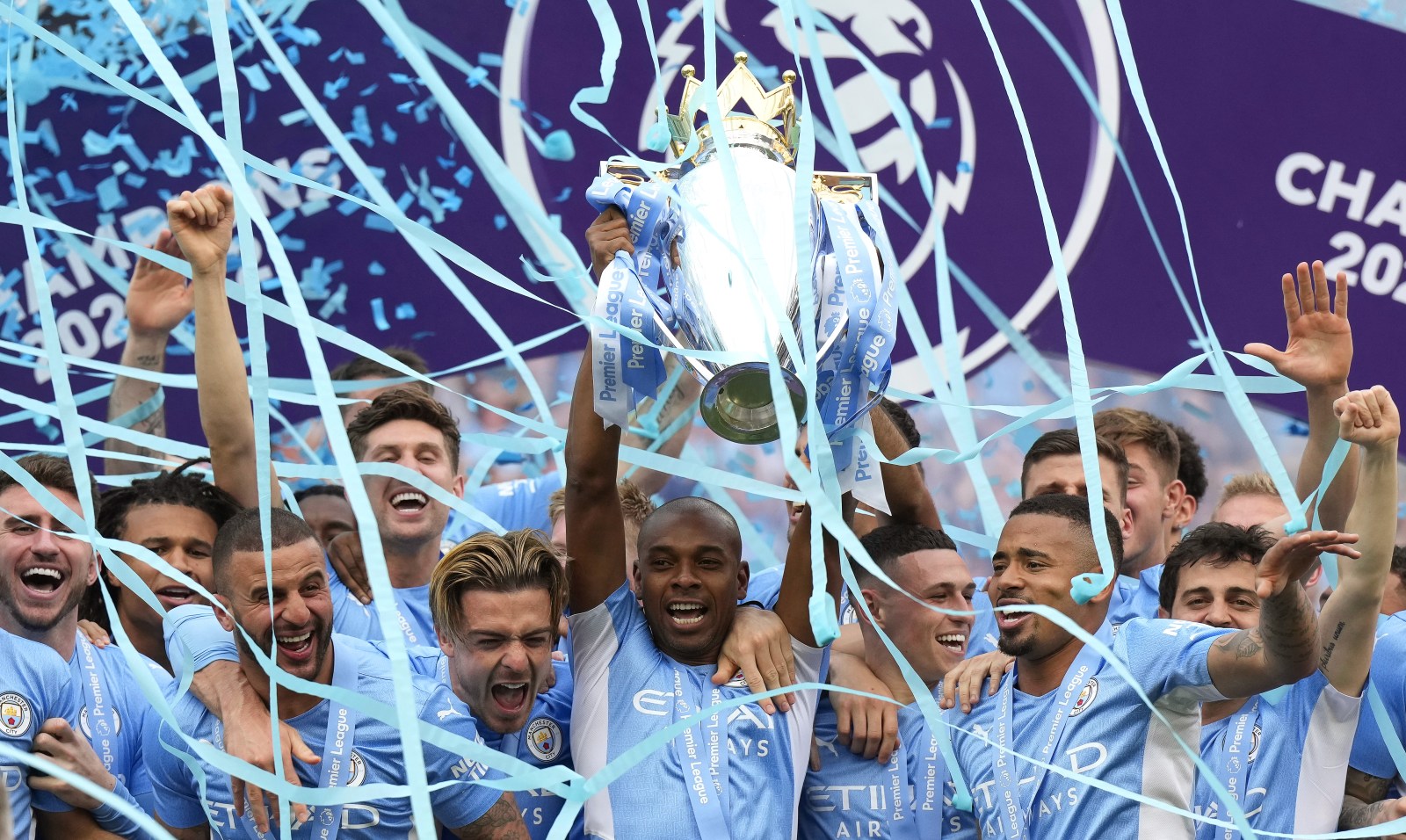 Manchester City won their fourth Premier League trophy in five years on Sunday but nearly let it slip from their hands, coming from two goals down to beat Aston Villa 3-2 with three goals inside an electrifying five minutes late in the second half.

After an afternoon of high nerves, laced with the fear of Liverpool pipping them to the title at the post, relieved and jubilant Manchester City fans poured on to the field at the final whistle at Etihad Stadium on Sunday, 22 May.

“The moment we found a goal, it changed everything. We were not playing in normal circumstances but you have to handle it,” said manager Pep Guardiola. “Gundogan is the best inside runner we have. We were arriving down the sides and we needed a player with the sense of tempo in the box and he’s the best.

“We are legends. When you win the Premier League four times in five seasons, it’s because these guys are so, so special. We will be remembered,” added the Spaniard.

The day was set up for a party and there was a relaxed mood around the ground before kick-off. But that was soon to change as Villa, managed by former Liverpool captain Steven Gerrard, provided a twist in the storyline.

Matty Cash put Villa in front in the 37th minute with a fine header from a Lucas Digne cross from the left flank, and the mood in the stadium instantly changed.

City were far from their fluent best, lacking finesse as they piled on the pressure in search of a leveller but rarely troubling Villa goalkeeper Robin Olsen.

The edgy mood among the home fans turned to desperation after Philippe Coutinho then doubled the lead for Villa with a goal of pure simplicity.

Ollie Watkins headed on from a long Olsen goal kick, and the former Liverpool midfielder Coutinho produced a brilliant first touch to cut inside and then drill the ball into the bottom corner.

Liverpool were level with Wolves at the time of Coutinho’s strike, but City knew that a goal for Jürgen Klopp’s side could now take the title away from them.

But then came the City comeback blitz that sealed the title regardless of events at Anfield. Two substitutes combined for the first, with Gundogan heading in a Raheem Sterling cross at the back post in the 76th minute.

Halftime substitute Oleksandr Zinchenko, on the left flank, then showed composure to pull the ball back to Rodri, and the Spaniard delivered a pinpoint finish — side-footing into the bottom corner from 20m.

The title-winning goal came in the 81st minute when Kevin De Bruyne whipped in a low cross to Gundogan, who tapped in from close range, sending the crowd into rapturous delight.

Liverpool came from a goal down to beat Wolves, but it was not enough to earn them their 20th league title, as they finished a point behind Manchester City.

After going behind to an early Pedro Neto tap-in, goals from Sadio Mané and late strikes from Mohamed Salah and Andy Robertson gave the home fans some cheer — even if their fate depended on the proceedings in Manchester.

City, however, were in no mood to lie down as they produced a heroic fightback of their own.

Liverpool finished the season on 92 points, one behind City for the second time in four seasons but with a League Cup and FA Cup trophy in their cabinet.

Klopp’s men also have a Champions League final against Real Madrid to look forward to next weekend in Paris, where they could win their seventh European Cup.

Klopp congratulated City on their triumph on Sunday, after his side missed out on the title by one point for the second time in four seasons, but said his team would improve next year.

The German manager has his own history of finishing second in domestic campaigns, having done so twice with Borussia Dortmund in Germany after winning two Bundesliga titles.

He also led Liverpool to their first Premier League title in 2020, a year after they finished runners-up to City by one point, but said on Sunday that he was proud of his players despite the agonising finish.

Finishing second is “the story of my life… You need to get more points than any other team, but we didn’t do that,” Klopp told Sky Sports. “You can’t do more than give your absolute best and that’s what the boys did again. We chased the best team in the world to the wire; that’s absolutely special. We’ll build a team again and go again.”

Liverpool end the season with the third-highest points total in the club’s history, the fourth when adjusting the 42-game 1978-79 season to three points for a win. They found themselves second to City again, although they do have a glut of silverware already from this season, having captured the League Cup and FA Cup.

They could add a seventh European Cup to their collection in the Champions League final against Real Madrid on Saturday, 28 May.

“I’ve already told them 500 million times: this is the best group I’ve ever had. It’s a joy to come into work every morning. We need a solid basis to react to defeats. We know why we didn’t make it — we needed a bit more consistency in the first half of the season,” the German added.

“There’s space for improvement and we’ll work on that. It’s really cool when you don’t need 10 changes, you just build on what you have. That’s what we’ll do. If people on the outside don’t understand how special this club is, I can’t help them. Hopefully now, we’ll get our third trophy of the season.”

Wolves took a shock lead three minutes in when defender Ibrahima Konaté misjudged a bouncing ball from a goal kick, allowing Raúl Jiménez to run in behind on the right and pick out Neto to side-foot in his first goal of the season.

Liverpool equalised in the 24th minute when a cute Thiago Alcântara backheel set Mané free to charge at goal and strike an effort that was so fierce, goalkeeper José Sá could only get a hand to it before it went in.

Sá had to be replaced by John Ruddy at halftime because of an injury and, soon after, Liverpool brought on Salah, rested from the beginning, in search of the winner and peppered shots at goal, only to see them continually blocked by Wolves defenders.

The atmosphere became frantic as news filtered through from the stands that City were losing 2-0 to Villa and the title would end up at Anfield if Liverpool could find a goal.

They found that breakthrough seven minutes from fulltime when Salah squeezed in a loose ball in the box. The goal was the Egyptian’s 23rd of the season and meant he finished the campaign level as top scorer with Tottenham Hotspur’s Son Heung-min.

Fullback Andy Robertson then put the gloss on the scoreline late on by sliding in Roberto Firmino’s cutback.

By that time, however, City had completed their own comeback win over Villa, meaning they retained the title and Liverpool finished the season as runners-up. Wolves finished 10th on 51 points. Reuters/DM