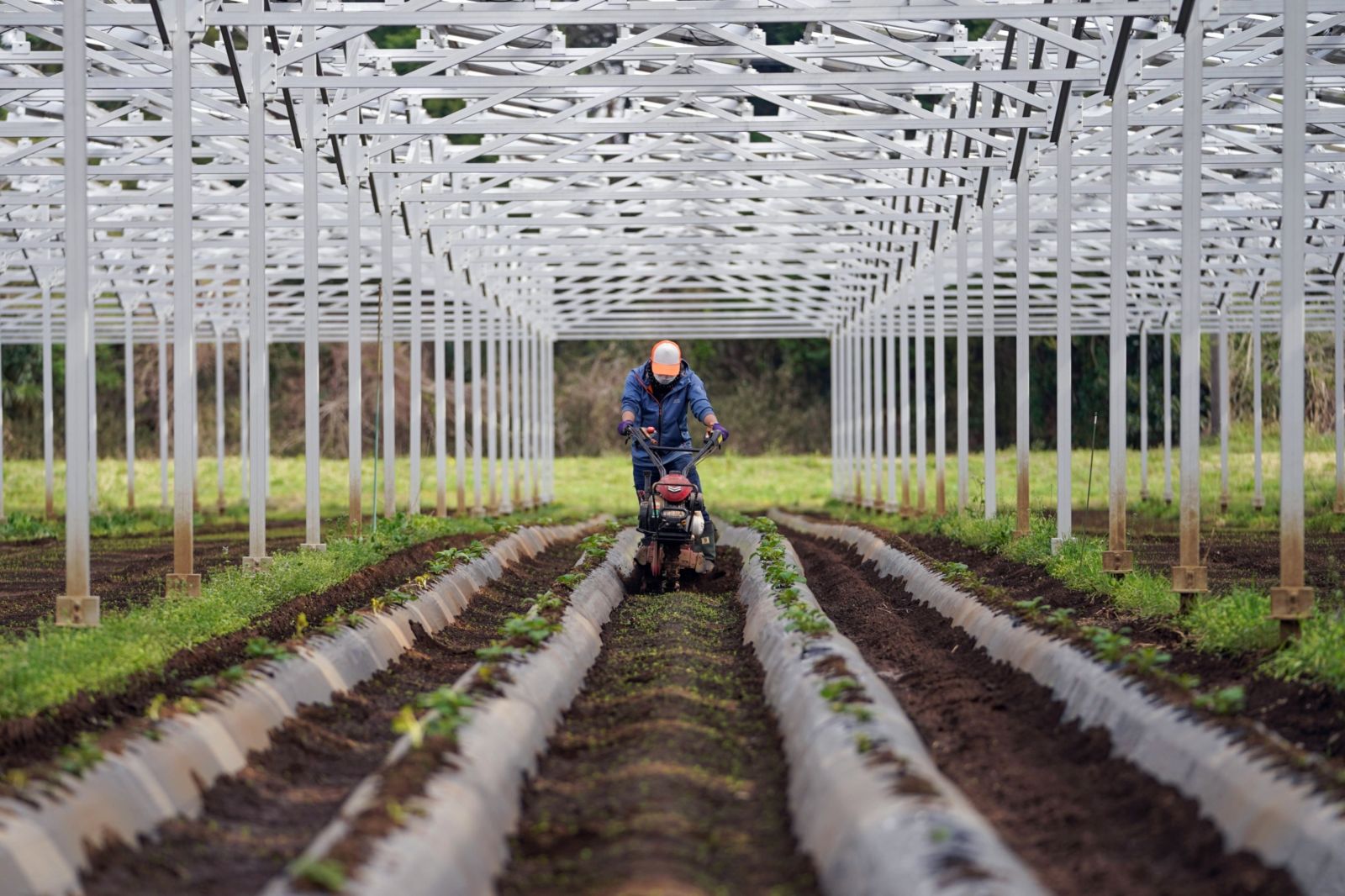 A worker cultivates a field under solar panels. Solar sharing is a viable alternative in places like Japan with limited space and a heavy reliance on energy imports. Solar panels perch above the crops. The farm is operated by a startup Chiba Ecological Energy. Photographer: Toru Hanai/Bloomberg

Solar sharing is emerging as a viable alternative in places like Japan with limited space and a heavy reliance on energy imports, and be a good little earner for farmers.

In many respects, Takeshi Magami’s farm is like any other in Japan, growing everything from potatoes to ginger and eggplants. But one major thing sets it apart from its neighbours: the 2,826 solar panels perched above the crops.

The panels, covering much of the single hectare in the tranquil countryside in Chiba, east of Tokyo, serve a dual purpose: they supply nearly all the power needed to run the farm, and are a source of extra income through selling surplus renewable energy to the grid.

For Magami that can mean 24 million yen (about R2,9-million) of additional revenue a year, eight times more than the maximum three million yen generated from his produce. While he benefits from generous tariffs that have since been reduced, it’s an indication of the added value available to farms in Japan and globally.

“Our goal is to electrify and automate all steps of farming” and create a model for what sustainable agriculture could look like, said the 38-year-old Magami, who has been operating the farm as part of his start-up Chiba Ecological Energy.

All the machinery used on Magami’s farm, minus the tractor and a hand-pushed tiller, are electric, charged by panels set above a small shed. Rows of batteries for the tools are lined up on a shelf.

The farm is part of a global movement called solar sharing – or agrivoltaics – that involves the simultaneous use of farmland for producing crops and generating power. The movement is gaining adherents as the global push to replace fossil fuels is encouraging more innovative approaches to boosting capacity for renewable energy.

Solar sharing is emerging as a viable alternative in places like Japan with limited space and a heavy reliance on energy imports. It can help stretch homegrown energy production as countries increasingly seek to reduce their exposure to foreign supplies. Solar sharing is also useful in countries with harsh growing environments, protecting crops by absorbing sunlight and acting as a shield.

“We’ve seen many regions with climate change, and agrivoltaics could mitigate and make agriculture more resilient,” said Max Trommsdorff, head of the agrivoltaics group at the Fraunhofer Institute for Solar Energy Systems ISE in Germany. “Small countries in the sun belt with high population is where agrivoltaics are most urgent and promising.”

Japan, which aims to go carbon-neutral by 2050, has limited capabilities for renewable energy because of its mountainous terrain. Its target is 36% to 38% of its energy mix coming from renewable sources in 2030, with solar accounting for 14% to 16%. While Japan’s solar installations have risen over the past decade, they supplied only 8.9% of the country’s power as of fiscal 2020, according to the Institute for Sustainable Energy Policies in Tokyo.

That means Japan will need more spots for panels. The government is looking at rooftops, railway lines and airports, and the country’s wide stretches of agricultural land on the flat plains offer a promising alternative.

A way to go

But while Magami has demonstrated the success of solar sharing, the practice hasn’t been widely adopted in Japan. Only 742ha were approved for agrivoltaic use between fiscal 2013 and 2019, according to data from the agriculture ministry, out of the country’s total agricultural land of 4.4 million hectares as of 2020.

Agrivoltaics is a tough sell for Japan’s elderly farming population. Many are without successors to take over the business, and they’re unwilling to make the heavy investment in solar panels that may take decades to pay off. It also can be a distraction from the business of growing crops.

“Some people are against it as it ruins aesthetics, or for getting in the way of farmwork,” said ministry official Chiho Egashira. It can be cumbersome for farm equipment to dodge poles that lift the panels off the ground.

While solar panels can be an alluring prospect for extra income, the ministry wants to ensure food security remains the priority, so it has put in place rules to ensure production levels.

Magami says that despite the hurdles, it’s necessary for the country to embrace agrivoltaics to reach carbon neutrality by 2050. He calculates that using solar panels on roughly 5% of Japan’s arable farmland, or equivalent to 200,000ha, could account for 20% of the country’s power generation.

“Things like geothermal and hydropower take decades to start operating,” Magami said. “We’re no longer in an era where the best way is to find unused plots of land available and install it with panels. Those have all been filled.”

Other nations are making progress with solar sharing, especially those with a similar lack of space. South Korea has targeted 10 gigawatts of agrivoltaic capacity by 2030 under its Renewable Energy 3020 plan. Taiwan is eyeing the scheme as it seeks available space for renewable installation, according to Magami. Italy plans to invest €1.1-billion (about R18,4-billion) in agrivoltaics to create about 2GW of capacity.

Larger countries too have a significant presence. China, the world’s top solar panel producer, is home to the biggest agrivoltaic system, a project covering 20 million square metres in the desert in Ningxia. Of the 2.8GW agrivoltaic systems installed globally, China had roughly 1.9GW of capacity as of 2020, according to the Fraunhofer Institute.

Adoption in the US varies, with more progressive states in the northeast launching projects with government funding, according to Mark Uchanski, an associate professor at Colorado State University who specialises in sustainable and organic agriculture.

“People’s appetites are increasing,” he said. Agrivoltaics “is a perfect storm for wanting food security, energy and working toward emission goals”. DM/Bloomberg

With assistance from Heesu Lee and Luz Ding

By their friends shall ye know them — South Africa and Russia