All you need to know about the global monkeypox outbrea... 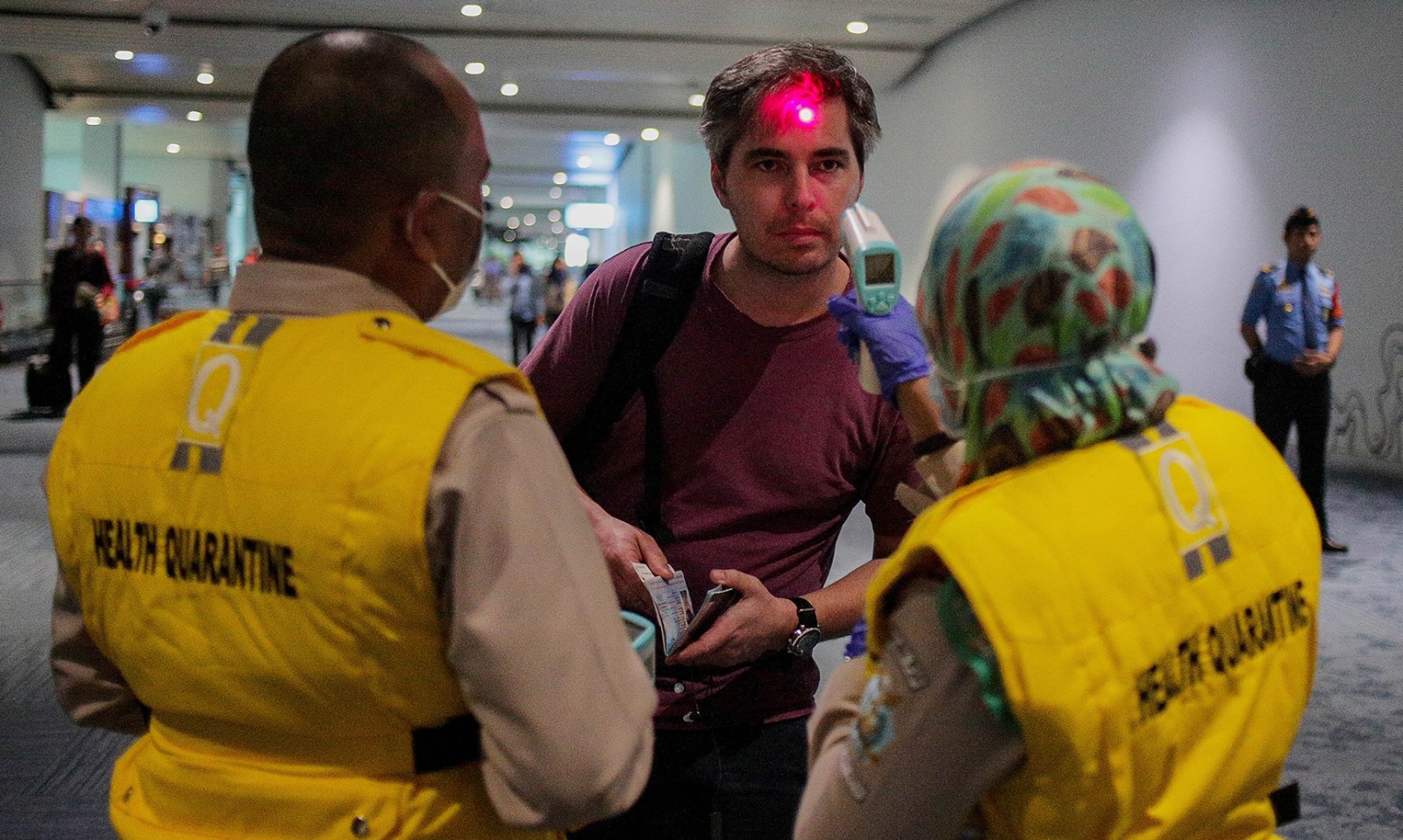 Health officers try to detect the monkeypox virus on arriving passengers at Soekarno-Hatta International Airport in Tangerang near Jakarta, Indonesia, on 15 May 2019. (Photo: Jepayona Delita / Future Publishing via Getty Images)

There are currently no cases of monkeypox in South Africa. Infections are increasing in other countries where the virus is not normally found, but scientists at the National Institute for Communicable Diseases have warned that the nature of global travel means SA might soon see its first cases.

The world currently faces an outbreak of monkeypox infections, with 140 cases of the disease confirmed in 15 countries. Most of the patients are men and the symptoms are mild.

The symptoms of monkeypox are:

Transmission during sex is believed to be possible but has not yet been proven.

Dr Jacqueline Weyer from the Centre for Emerging, Zoonotic and Parasitic Diseases said the monkeypox virus was not highly transmissible from person to person.

She said the skin lesions produced by a monkeypox infection are similar to those caused by chickenpox. “A major difference would be that an infected person will also suffer with swollen lymph nodes, which is not seen with chickenpox.

“In the current outbreak, cases of possible transmission through sexual contact have been noted, but are not confirmed. The latter is most likely a coincidental finding in this outbreak. A person is contagious from the onset of the rash/lesions through to the scab stage. Once all scabs have fallen off, a person is no longer contagious,” Weyer said.

She said most cases self-resolve within two to three weeks after the onset of the disease.

“Case fatality rates are low – about 3% to 6% in recent occurrences. Currently, no fatalities have been reported from the ongoing outbreak.”

She said that there was not a commercially available vaccine for monkeypox.

“[However], the smallpox vaccine which was used up to about 1980 (different countries stopped vaccinating at slightly different times) to eradicate smallpox disease in humans … provides up to 85% cross-protection for monkeypox, and the 40-year-plus population may still retain some degree of immunity to the disease.”

Weyer emphasised that no cases had been found in South Africa and no suspected or confirmed cases had been detected since the start of the current outbreak.

“The NICD is equipped to test for monkeypox as the Centre for Emerging, Zoonotic and Parasitic Diseases has a diagnostic polymerase chain reaction (PCR) in place and electron microscopy capacity,” Weyer added. She works in the Special Viral Pathogens Division.

She said the NICD Sequencing Core Facility will work to provide sequencing analysis rapidly, should a case be identified to determine relatedness to the current outbreak strain.

“The NICD will continually assess the risk for local introduction and transmission in collaboration with the National Department of Health and the WHO in line with international health regulations,” she added.

Dr Susan Hopkins, the chief medical adviser for the UK Health Security Agency, said in a statement from the organisation: “We anticipated that further cases would be detected through our active case finding with National Health Service services and heightened vigilance among healthcare professionals. We expect this increase to continue in the coming days and for more cases to be identified in the wider community. Alongside this, we are receiving reports of further cases being identified in other countries globally.

“We continue to rapidly investigate the source of these infections and raise awareness among healthcare professionals. We are contacting any identified close contacts of the cases to provide health information and advice.”

Hopkins continued: “A notable proportion of recent cases in the UK and Europe have been found in gay and bisexual men so we are particularly encouraging them to be alert to the symptoms and seek help if concerned.”

The NICD said: “The first case in the current outbreak was found in a traveller who returned to the United Kingdom from Nigeria, a monkeypox endemic area, on 4 May 2022. Clinicians confirmed that the patient had monkeypox three days later. Investigations have been unable to link that case to any of the other cases detected to date, suggesting that there have been multiple introductions of the virus into the United Kingdom and other countries, with cases potentially having gone undetected till now.

“A preliminary genome sequence from a confirmed Portuguese case indicates that the virus is the west African strain (reduced mortality of 1% compared with the 10% of the Congo Basin strain) and is most closely related to viruses associated with the exportation of monkeypox from Nigeria to the United Kingdom, Israel and Singapore during 2018-2019.”

Professor Adrian Puren from the NICD explained that milder cases of monkeypox may go undetected and represent a risk of person-to-person transmission.

“There is likely to be little immunity to the infection in those travelling or otherwise exposed, as endemic disease is usually geographically limited to parts of west and central Africa. Although monkeypox, which is related to smallpox (which has been eradicated), sporadically causes small outbreaks, transmission is believed to be inefficient as close contact is required. Thus, the current outbreak is unlikely to progress to being a global emergency.

“Monkeypox is usually a self-limiting illness and most cases will recover within a few weeks without treatment. However, severe disease may be observed in young children, pregnant women and individuals who are immunocompromised.

“The implications for South Africa are that the risk of importation of monkeypox is a reality as lessons learnt from Covid-19 have illustrated that outbreaks in another part of the world can quickly become a global concern,” Puren said.

The WHO has not recommended any travel restrictions and is working with the affected countries to limit transmission and determine the sources of exposure.

Puren added that for any person entering South Africa, any illness during travel or upon return from an endemic area should be reported to a healthcare professional, including information about all recent travel, immunisation history and contact with any known cases.

“Residents and travellers to endemic countries should avoid contact with sick animals that could harbour monkeypox virus, such as rodents, marsupials and primates, and should refrain from eating or handling wild game. A good history is essential to rule out other differential diagnoses, including malaria,” Puren concluded.

He emphasised the importance of hand hygiene by using soap and water or alcohol-based sanitisers. DM/MC