Beijing urges millions to keep working from home amid C... 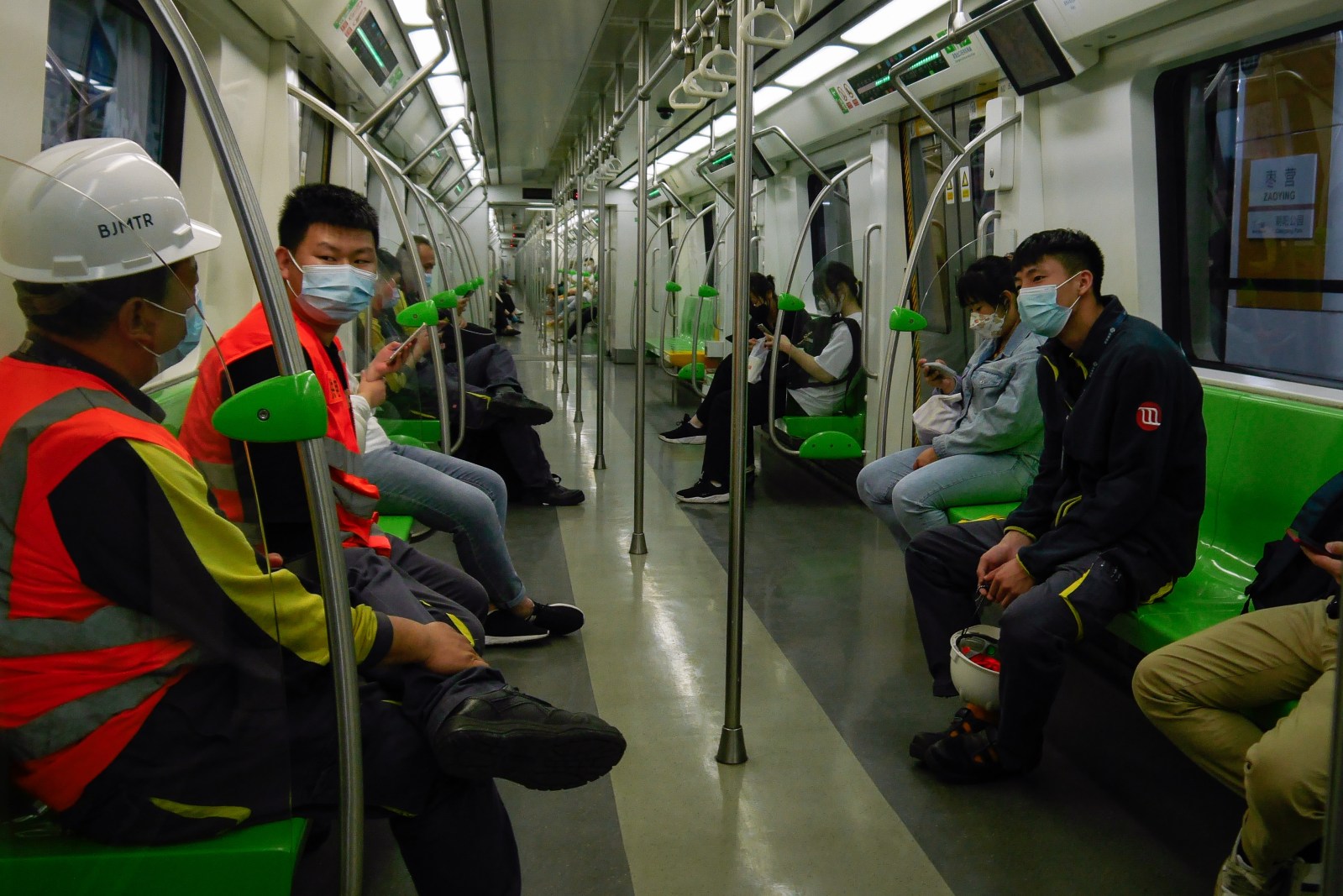 Workers wear face masks inside a train in Beijing, China, 21 May 2022. Beijing continues its mass testing as part of its effort to curb the spread of COVID-19 in the city while authorities in Shanghai announced a relaxed lockdown starting on 01 June 2022. EPA-EFE/MARK R. CRISTINO

BEIJING/SHANGHAI, May 23 (Reuters) - Beijing authorities extended work-from-home guidance for many of its 22 million residents to stem a persistent Covid-19 outbreak, while Shanghai deployed more testing and curbs to hold on to its hard-won 'zero Covid-19' status after two months of lockdown.

On Monday, the Chinese capital reported 99 new cases were detected on May 22, up from 61 the previous day – the largest daily tally so far during a month-old outbreak that has consistently seen dozens of new infections every day.

In Shanghai fewer than 600 daily cases were reported for May 22, with none outside quarantined areas, as there has been the case for much of the past week.

Analysts at Gavekal Dragonomics estimated last week that fewer than 5% of Chinese cities were reporting infections, down from a quarter in late March, in a COVID outbreak that has cast a pall over growth in the world’s no. 2 economy. But vigilance, and concern, remains acute in Shanghai and the capital.

While there were no new announcements of areas being closed in Beijing, five of the city’s 16 districts advised residents to work from home and avoid gatherings. Those who have to go to work should have a negative result on a PCR test taken within 48 hours, and must not deviate from their home-to-work commute.

“The city’s epidemic prevention and control is at a critical moment,” Beijing’s Tongzhou district posted on its WeChat account late on Sunday, asking residents who work in five other districts to do their jobs from home this week.

“One step forward and victory is in sight. One step back, and previous efforts would be wasted.”

Beijing had already curtailed public transport, asked some shopping malls and other stores and venues to close and sealed buildings where new cases were detected.

In one large residential compound not under isolation orders, shelves have been set up for deliveries at the entrance, according to residents, fuelling concern that preparation was in place for tougher controls on movement.

The curbs in Beijing, Shanghai and elsewhere in China are leaving behind significant economic damage and disruption to global supply chains and international trade.

The highly-transmissible Omicron variant of the virus first discovered in the city of Wuhan in late 2019 has proven hard to defeat even with strict measures that starkly contrast the resumption of normal life elsewhere in the world.

“We’ve been massively hit,” said a convenience store owner surnamed Sun, whose shop in Beijing has only been allowed to operate during daytime rather than its usual 24/7 hours.

“Even during the Wuhan outbreak we could stay open the whole time.”

In Shanghai, which reopened more than 250 bus routes and a small part of its sprawling subway system on Sunday, many towns and districts announced more mass testing for the coming days and asked residents not to leave their compounds.

The commercial hub of 25 million has allowed more people to leave their homes for brief periods over the past week, but it generally plans to keep most restrictions in place this month, before a lifting its two-month-old lockdown from June 1.

However, while more people are being allowed outside, several residents in various areas of Shanghai said they had been told of new infections in their vicinity that required new curbs on movement.

One resident in Hongkou district, which has not reported any new community-level cases since May 7, said he was told last week not to leave his flat, having been allowed to move within his compound previously.

Hongkou was among six districts which have announced some tightening of curbs in recent days to “consolidate” the results of their efforts so far.

But such moves made some people fear the virus was making a comeback.

The top comment on a post by state agency Xinhua on China’s Twitter-like Weibo post on Shanghai’s latest numbers read: “This can’t be accurate, zero COVID cases at community level? Our compound had one new case yesterday.”

Asked to comment, the Shanghai government said that all cases found in recent days were in “sealed” high-risk areas or quarantine centres, and that any community transmission cases would be announced on official channels.

(Reporting by Martin Quin Pollard in Beijing, Engen Tham, Winni Zhou, Brenda Goh in Shanghai and and the Beijing and Shanghai bureaus; Writing by Marius Zaharia; Editing by Kenneth Maxwell)