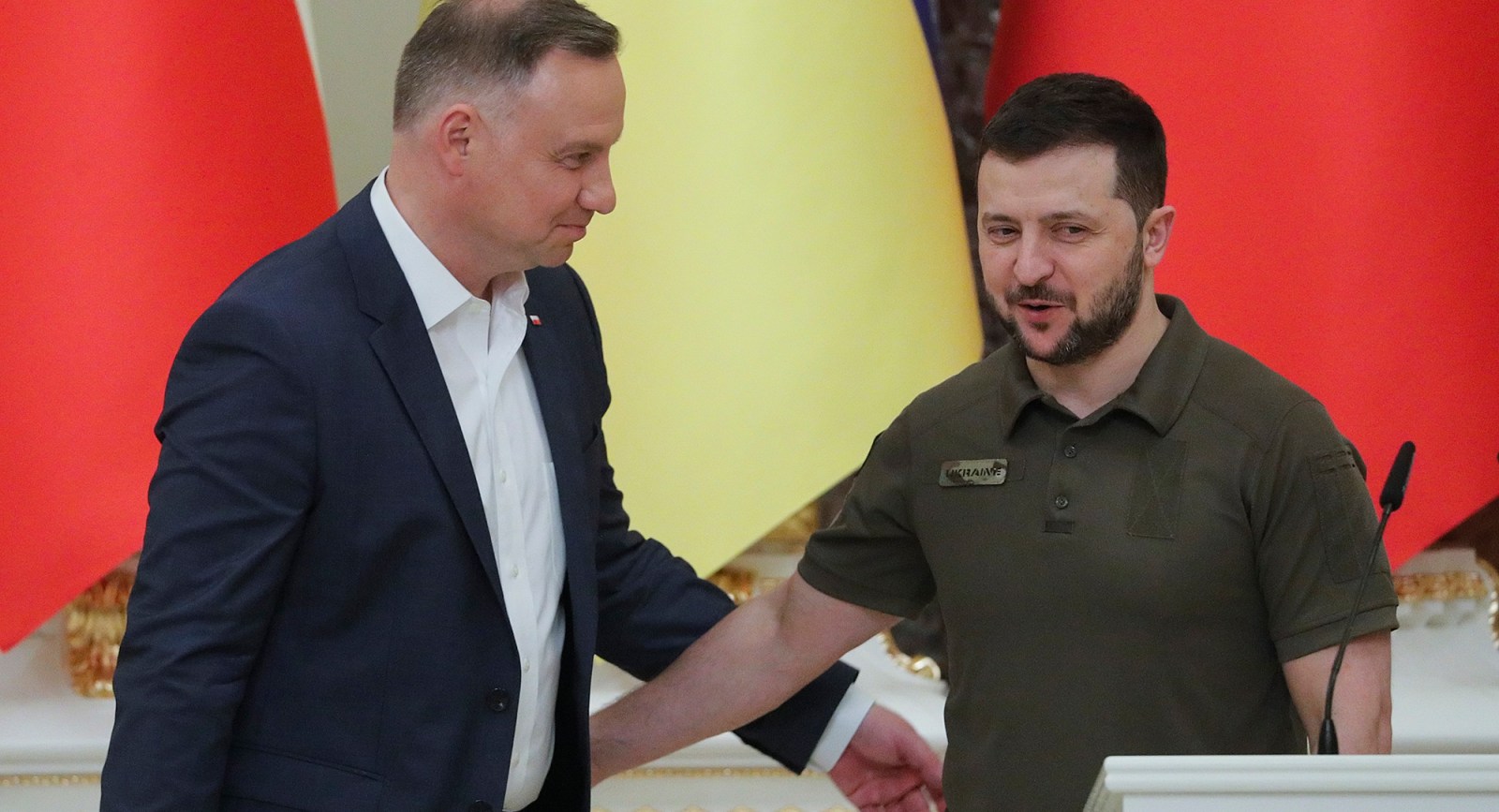 In a rare instance of Ukrainian President Volodymyr Zelensky hinting at the level of casualties the nation’s troops are incurring, he said as many as 100 Ukrainian soldiers could be dying each day in severe fighting in the Donbas, currently the main focus of Russia’s invasion.

As many as 100 Ukrainian soldiers may be dying each day in severe fighting in the Donbas, currently the main focus of Russia’s invasion, President Volodymyr Zelensky said.

Poland’s president said he “will not rest until Ukraine becomes a full-fledged member” of the European Union as he addressed lawmakers in Kyiv and met with Zelensky. Hours later, a French official said it may take Ukraine 20 years to join the EU, consistent with recent comments from French President Emmanuel Macron.

President Recep Tayyip Erdogan met Nato chief Jens Stoltenberg and the leaders of Finland and Sweden, on Saturday, 21 May. He reiterated his reservations about the Nordic nations’ bids to join the military alliance. US President Joe Biden signed into law a $40-billion US aid package for Ukraine.

As many as 100 Ukrainian soldiers may be dying each day in the most severe battles in the country’s east, President Volodymyr Zelensky told reporters in a joint press conference on Sunday, 22 May, with his Polish counterpart Andrzej Duda.

It was a rare instance of Zelensky hinting at the level of casualties the nation’s troops are incurring. He made the comment after being asked whether he plans to lift a ban on leaving Ukraine for men of conscription age.

In his address to the nation on Saturday, 21 May, Zelensky described the situation in the Donbas as “really hard”.

The exhaustive process for Ukraine to join the European Union may take 15 to 20 years, said Clement Beaune, France’s junior minister for Europe.

“If we were to say that Ukraine is going to join the EU in six months, or a year, or two, we would be lying,” Beaune said in an interview on Radio J on Sunday, 22 May. “It will be long, very long. I don’t want to sell illusions or lies.”

Beaune’s comment was consistent with one from French President Emmanuel Macron, who said this month that the stringent process of bringing Ukraine into the EU could take decades, and suggested the formation of a “parallel European community”. That idea is expected to be debated at an EU summit in late June.

Polish President Andrzej Duda drew repeated ovations as he described unshakable unity between Poland and Ukraine in an address to the Parliament in Kyiv.

“Only Ukraine has the right to decide about its own future,” Duda said, adding that there are “voices in Europe” asking Kyiv to cave in to Russian President Vladimir Putin. “If, for some kind of peace of mind, Ukraine is sacrificed, it will be a big blow not only for Ukraine, but also for the entire western community,” he said.

Duda, the first foreign head of state to address Ukrainian lawmakers in person since Russia’s invasion almost three months ago, said he was committed to ensuring that Ukraine is granted EU candidate status as quickly as possible.

Morawiecki, answering a question about his government’s energy policy on Sunday, 22 May, at a meeting of a youth group, said coal-reliant Poland plans to switch to renewables and nuclear energy, while shedding oil and gas deliveries from Russia and at some point from the Middle East as well.

Russian forces intensified efforts to encircle and capture Severodonetsk in Ukraine’s Luhansk region on Saturday, 21 May, and will likely continue to do so as efforts on other axes of advance, including Izyum, remain largely stalled, according to the Institute for the Study of War.

Troops may also be assembling in certain areas of Zaporizhia and Kherson Oblasts to prepare for further offensive operations on the southern axis, the US military think tank said.

The UK defence ministry said Moscow had likely deployed BMP-T Terminator tanks to the Severodonetsk area, adding that “their presence suggests that the Central Grouping of Forces is involved in this attack.” The unit suffered heavy losses near Kyiv in the first phase of Russia’s invasion.

Aeroflot back to the future as its operations shrink

Russia’s Aeroflot PJSC succeeded over the past two decades in transforming itself from a punchline about Communist-era service into an award-winning international carrier flying one of the youngest fleets in the world.

It now faces a future that looks more like its Soviet past and, with its Boeing and Airbus jets cut off from parts and service, it is shifting its focus to domestic routes and locally produced planes as the impact from unprecedented economic sanctions on Russia becomes clearer.

Aeroflot “will be a shadow of itself,” said Christopher Granville of London-based consultancy TS Lombard. “This is a mirror for the Russian economy as a whole.”

Serbian President Aleksandr Vucic will likely speak to his Russian counterpart on Wednesday, 25 May, or Thursday, 26 May, to discuss gas supplies, TV Pink reported, citing an interview with Vucic.

Kuleba calls for ‘clear goals’ as path to victory

Dmytro Kuleba, Ukraine’s foreign minister, said on Twitter that “setting clear goals” and building policies to that end was the first step for Ukraine to emerge victorious.

Russia “will explore” swapping some of Ukraine’s defenders of the port city of Mariupol for Viktor Medvedchuk, an ally of Russian President Vladimir Putin, Interfax news agency reported, citing senior lawmaker Leonid Slutsky, a member of the Russian negotiating team that took part in peace talks with Kyiv.

“We will study the possibility,” Slutsky said on Saturday, 21 May, in Donetsk, a eastern Ukrainian city occupied by Russia, according to Interfax.

“I started to ask a question, I mentioned the word ‘shale’,” Daniel Yergin, vice chairperson of S&P Global, recalled of a 2013 encounter with Russian President Vladimir Putin. “And he started shouting at me, saying shale’s barbaric.”

US shale oil and gas have had a much bigger impact on geopolitics than people recognise, the energy expert says in a new podcast. It’s posed a threat to Putin in multiple ways, especially as US natural gas went on to compete with Russia’s in Europe.

Read more: How an energy expert triggered Vladimir Putin with one word

Ukrainian President Volodymyr Zelensky urged partners to help reopen ports and clear the way for about 22 million tonnes of grain and sunflower exports now being blocked by Russia.

“There will be a second crisis in the world after the energy crisis” if the Black Sea ports were not unblocked, Zelensky said during a media conference with António Luís Santos da Costa, Portugal’s prime minister.

His comments echo those of Sara Menker, CEO of Gro Intelligence, who told a UN briefing this week that price increases for major food crops this year — driven in part by Russia’s invasion of Ukraine — have “made an additional 400 million people food insecure”. Attempting to export Ukraine’s grain through Europe via rail is “not enough”, she said.

As expected, US President Joe Biden signed the $40-billion aid package passed by a wide bipartisan majorities in Congress on Saturday, 21 May.

The funds, intended to support Ukraine until September, are significantly larger than the $33-billion Biden requested last month. Its passage by overwhelming margins in the Senate on Thursday, 19 May, and the House last week was seen as a sign of popular support in the US for Ukraine’s efforts against Russia’s invasion.

Biden, who is in Seoul, praised Congress earlier in the week for approving the spending, saying the funds “will allow us to send even more weapons and ammunition to Ukraine, replenish our own stockpile, and support US troops stationed on Nato territory”. DM