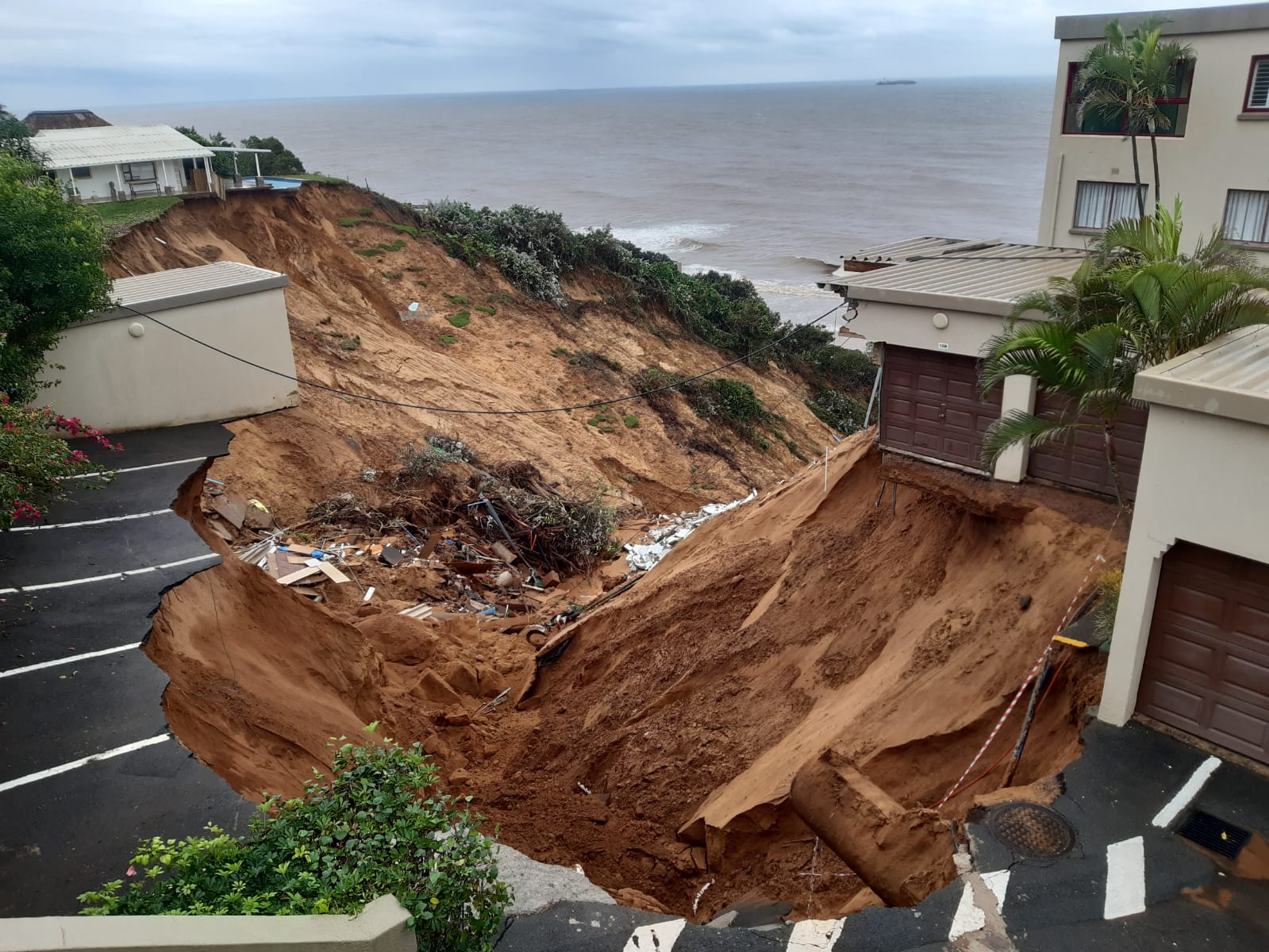 The gully gouged out by floodwaters between Surfside and its Umdloti neighbours. (Photo: Des Erasmus)

An Umdloti resident, waving her hand in defeat, could not complete the sentence as she tried to describe to Daily Maverick on Sunday the ‘roar’ as several upmarket flats and vehicles at the Surfside apartment complex — near her home — collapsed into a heap of rubble and were swallowed by metres of thick, red mud late on Saturday night.

Some residents returned to Surfside on Sunday to collect valuables or stare disbelievingly at the units that had collapsed. The wreckage of those homes and vehicles now form part of a gaping, sludgy crevice.

Other residents of the complex were hastily loading cars. They had been ordered to leave for safety reasons. Most had already done so, they told Daily Maverick.

Before police arrived to shoo away onlookers, dozens of friends, neighbours and gawkers had gathered inside the grounds of the complex behind thin security tape. They were peering into the mess, the tar at their feet jagged and flimsy as cardboard, as they pointed out cars in the slop that protruded as if they had been piped on to a collapsed cake.

The crevice is the result of a failed stormwater drain, initially damaged during the devastating April floods, which left more than 400 people in the province dead. About 80 are still missing.

Daily Maverick understands that the tender to reinstate the Umdloti stormwater system was closed on Friday.

The village is renowned for its clean beaches, tight and mostly wealthy community, and warm sea.

Its tidal pool is particularly sublime in the summer months, and the KZN weather is usually so accommodating that swimming is pleasurable throughout the year. The place has not yet succumbed to the garishness that defines Umhlanga, but a hammering by two torrential downpours — a level 10 alert was issued by SA Weather System early Saturday —  in the space of a month, has taken an expected toll.

The village’s waterworks — situated adjacent to the only road into the hamlet — was gutted on Saturday. Umdloti’s beaches are again a mess of soil, silt and debris.

David Chivell, chairperson of the Surfside Body Corporate, told Daily Maverick the body corporate had advised residents whose units were in danger to leave on Saturday night. A second request was later made that those whose units “could be in danger” should leave.

“We didn’t evacuate the whole building [on Saturday], only the units in danger. The lower block [closer to the seaside] has also been evacuated as we are nervous that the complex swimming pool, which is elevated above these units, could be in danger of collapse if there is further erosion and rain, endangering the units below,” said Chivell.

Some residents are adamant that the new Salta Sibiya development above Umdloti is responsible for the destruction — the result, they say, of poor planning that includes removal of vegetation, or, for the latest washaway, diverting water after last month’s rains. But the developers have denied this and maintain they have adhered to all regulations throughout construction.

Chivell was not willing to apportion blame. Even if he could, he said, the body corporate would not have the funding to litigate.

There was concern, he added, that with the loss of about a quarter of the units, existing owners could expect a hefty levy hike. The running costs largely remain the same and the land lost, even if reclaimed, could never be built on again.

No deaths had been reported in the province by Sunday afternoon, according to Cogta MEC Sipho Hlomuka, but dozens of residents in coastal areas had to evacuate for safety reasons.

eThekwini’s disaster management head, Vincent Ngubane, told Daily Maverick on Sunday night that three bodies had been discovered near a river in the northern part of the province, but two had bullet wounds. It was thus unlikely that the deaths were the result of flooding. Police were investigating all three deaths, he said.

A South African National Defence Force (SANDF) temporary army base in the city’s southern area started to evacuate on Sunday as the Umbilo river continued to rise and ground around the army tents began to wash away. The officers are to be stationed in the nearby Brettenwood High School — itself severely affected by the April flooding.

Several routes were again rendered inaccessible along the M4, due to mudslides. Visibility in eThekwini and other parts of the province was poor on Sunday morning as rain pelted the coast, with authorities discouraging driving.

Bayhead Road, which leads to the Durban port and accommodates more than 1,000 vehicles a day, was hit by flooding, with heavy machinery being used to repair damage from the April flooding standing idle and drenched in water. Dozens of long hauler trucks were waiting to enter the port when Daily Maverick visited the area on Sunday. The only power sub-station affected by the weekend rains was Bayhead. Hlomuka said it had to be “switched off to prevent flood-related breakdowns”.

A family in KwaMashu was evacuated because of a collapsed informal dwelling, while 190 Umlazi residents had to be moved to a local hall.

“We would like to assure members of the public that all emergency services teams [have been] on the ground from [Saturday] night, including Search and Rescue, SANDF and private companies, and evacuations will be conducted when the need arises,” said Hlomuka.

“We also experienced washaways in areas such as Moseley Park, Gillitts and KwaNdengezi. We are still assessing whether these heavy rains had an impact on the work we have already started in Tongaat [following the April flooding].”

Tongaat continues to battle with water outages, a result of the April rains.

More rain is expected in the region today.DM