HELL ON THE HIGHVELD 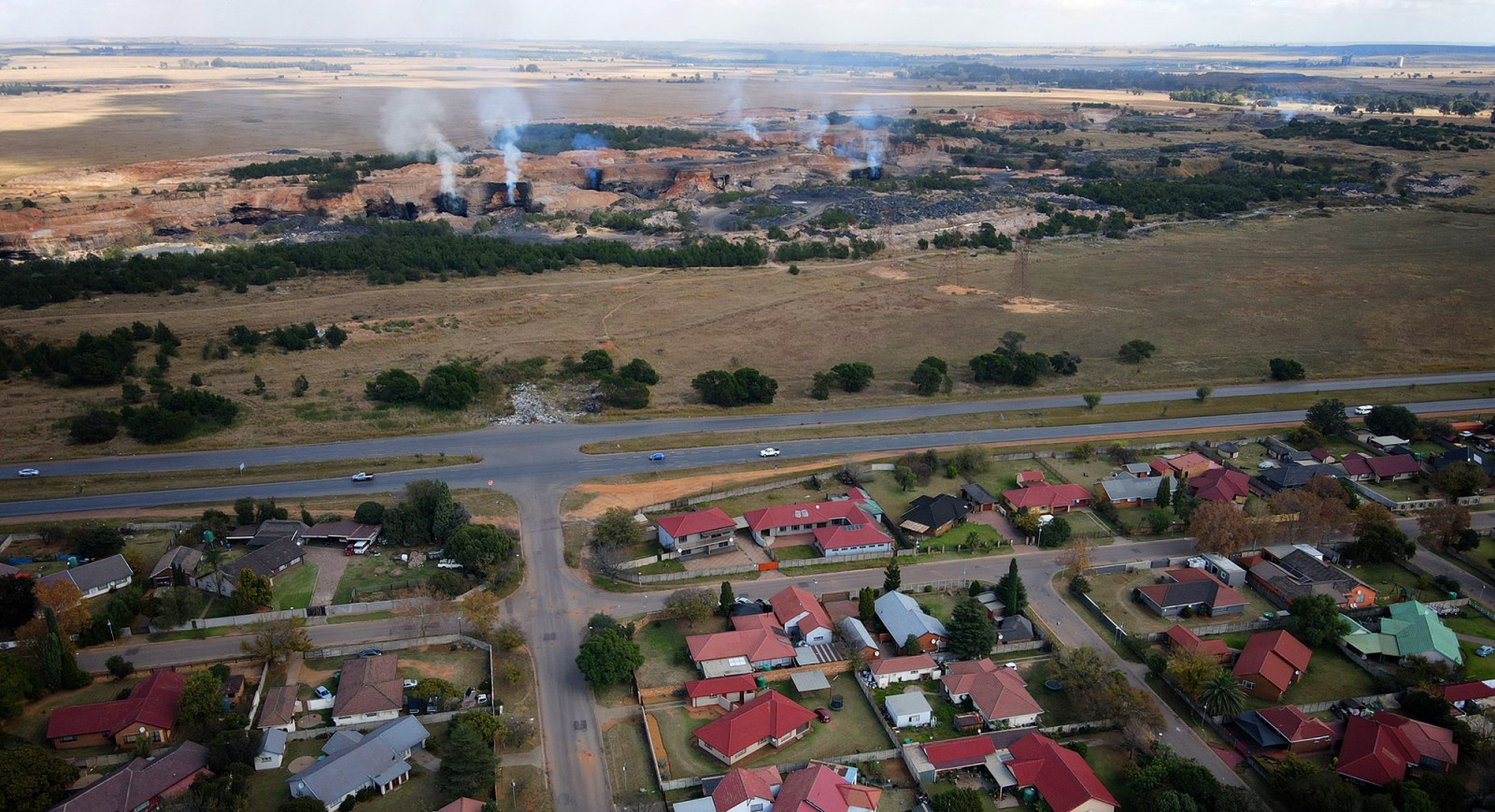 The Bokgoni / Kleinkopje complex at Thungela's Khwezela Colliery in eMalahleni, Mpumalanga, on 17 May 2022. Many of the pits visible were dug by sophisticated illegal coal mining operations that have left the landscape scarred and littered with abandoned or deserted mining machines. Most troubling, however, is a thick blanket of smoke and fumes and the fires that have caused them. These seemingly endless fires have been burning for multiple weeks and none of the relevant authorities seems to regard the situation with any urgency while the adjacent communities suffer the health impacts. (Photo: Ethan van Diemen)

“For particulate matter there is no evidence of a safe level of exposure or a threshold below which no adverse health effects occur.” So said Rico Euripidou, a trained environmental epidemiologist when asked about the impacts of a coal mine fire that has been burning for weeks.

Section 24 of Chapter 2 of the Constitution of the Republic of South Africa says that “everyone has the right ­to an environment that is not harmful to their health or wellbeing.” Despite this human right being codified into the supreme law of the land, an Our Burning Planet report recently showed that these inalienable rights are allegedly being violated through the actions of illegal miners and the subsequent inaction of local authorities.

For weeks now, fires – allegedly started by sophisticated illegal mining groupings – have been smouldering at the Northwest pit at Thungela Resources’ Khwezela Colliery just outside of eMalahleni in Mpumalanga. Allegedly this has resulted in respiratory issues and severe levels of ocular irritation among the adjacent communities.

Mpumi Sithole, the executive head of corporate affairs at Thungela, told Our Burning Planet that “illegal mining and blasting activities have been taking place in the area and have resulted in spontaneous combustion and the development of sinkholes. Smoke and hazardous fumes arising from spontaneous combustion pose a health risk to surrounding communities and the environment.”

An article in the International Journal of Environmental Research and Public Health titled Associations between Respiratory Health Outcomes and Coal Mine Fire PM2.5 Smoke Exposure: A Cross-Sectional Study, “examined associations between self-reported respiratory outcomes in adults and mine fire-related PM2.5 smoke exposure”.

According to the US Environmental Protection Agency, Particulate Matter (PM)2.5 “describes fine inhalable particles, with diameters that are generally 2.5 micrometers and smaller”.

Among other findings was that “There was some evidence of an association between respiratory outcomes and mine fire PM2.5 exposure,” and “Coal mine PM2.5 smoke exposure was associated with increased odds of experiencing cough, phlegm and wheeze.”

The article goes on to explain that “Coal mine fire smoke contains multiple pollutants known to be harmful to human health, including particulate matter (PM), carbon monoxide, polycyclic aromatic hydrocarbons and benzene” and adds that “The chemical profile of pollutants released varies with geographical location, coal composition, meteorology and combustion conditions.”

Another study – Coal mine fires and human health: What do we know? – published in the International Journal of Coal Geology explains that “Coal mine fire smoke is likely to have short-term adverse respiratory impacts. Adverse cardiovascular outcomes and increased mortality are also plausible depending upon the magnitude of exposure and the number of people affected.”

Rico Euripidou, groundWork’s campaign coordinator, trained as an environmental epidemiologist at the London School of Hygiene and Tropical Medicine in the United Kingdom.

“The problem of out-of-control fire burning in coal mines is a long-standing problem in South Africa and as early as mid-2000 we at groundWork have been alerting the DFFE, the NDoH and the parliamentary committee on environment about the ongoing and often ignored problem (especially ignored by the DMRE) of the environmental, human health and previously underestimated climate contribution from this source,” he said.

Our Burning Planet has made multiple attempts to solicit a response from the DMRE with no success. None of the employees at the Department responded substantively at the time of writing despite requests being “noted”.

Euripidou continued that “From a human health perspective, human health and wellbeing are dependent on the quality of the environment. Air pollution is an important indicator of environmental health. Air pollution is also an important determinant of health. The World Health Organisation has confirmed that air pollution, both ambient and indoor, is one of the largest causes of death worldwide. About a quarter of all heart attack deaths, and about a third of all deaths from stroke, lung cancer, and chronic obstructive pulmonary disease are due to air pollution exposures. Health impacts are largest among women, children, older people, and the poor.

“Air pollution and climate change are interlinked. In 2018, during the first WHO Global Conference on Air Pollution and Health, the WHO’s General Director, Dr Ghebreyesus, called air pollution a ‘silent public health emergency’.

“Exposure to ambient PM2.5 as a major health concern cannot be underestimated – recent research into global estimates of mortality associated with long-term exposure to outdoor fine particulate matter, has revealed that outdoor particulate air pollution is an even more important population health risk factor than previously thought,” he explained.

Making reference to numerous studies, Euripidou said that “Global Exposure Mortality Models were constructed for five specific causes of death examined by the global burden of disease (GBD) and it predicted 8.9 million deaths in 2015 due to PM2.5, a figure 30% larger than that predicted by the sum of deaths among the five specific causes and 120% larger than the risk function used in the GBD.”

“These studies even go further to suggest additional causal health outcomes to be associated with air pollution and in particular for PM2.5 in integrated studies, and also demonstrating associations between cardiovascular, respiratory or total mortality, health outcomes.

“For particulate matter there is no evidence of a safe level of exposure or a threshold below which no adverse health effects occur.”

According to the Centre for Environmental Rights which recently spearheaded a court case around the quality of air in Mpumalanga, the province has been plagued with deadly air quality for decades, with the high concentration of coal-fired power plants in the province, Sasol’s coal-to-liquids plant located in Secunda, and the Natref refinery in Sasolburg contributing large amounts of pollution.

In March, the Pretoria High Court lambasted national Environment Minister Barbara Creecy (and her predecessor Nomvula Mokonyane) for their failures, “inordinate delays”, and foot-dragging in tackling the harmful and potentially fatal levels of air pollution in the so-called Highveld Priority Area.

“As a consequence of this failure … and the department’s own finding that more than 10,000 premature deaths occur each year which are directly attributable to air pollution in the Highveld Priority Area, the inescapable conclusion that must be reached on the evidence presented, is that the level of air pollution in this area is not consistent with the section 24[a] [constitutional] right to an environment that is not harmful to health or wellbeing,” Judge Colleen Collis declared.

Creecy has indicated that her department will be challenging aspects of the ruling.  OBP/DM