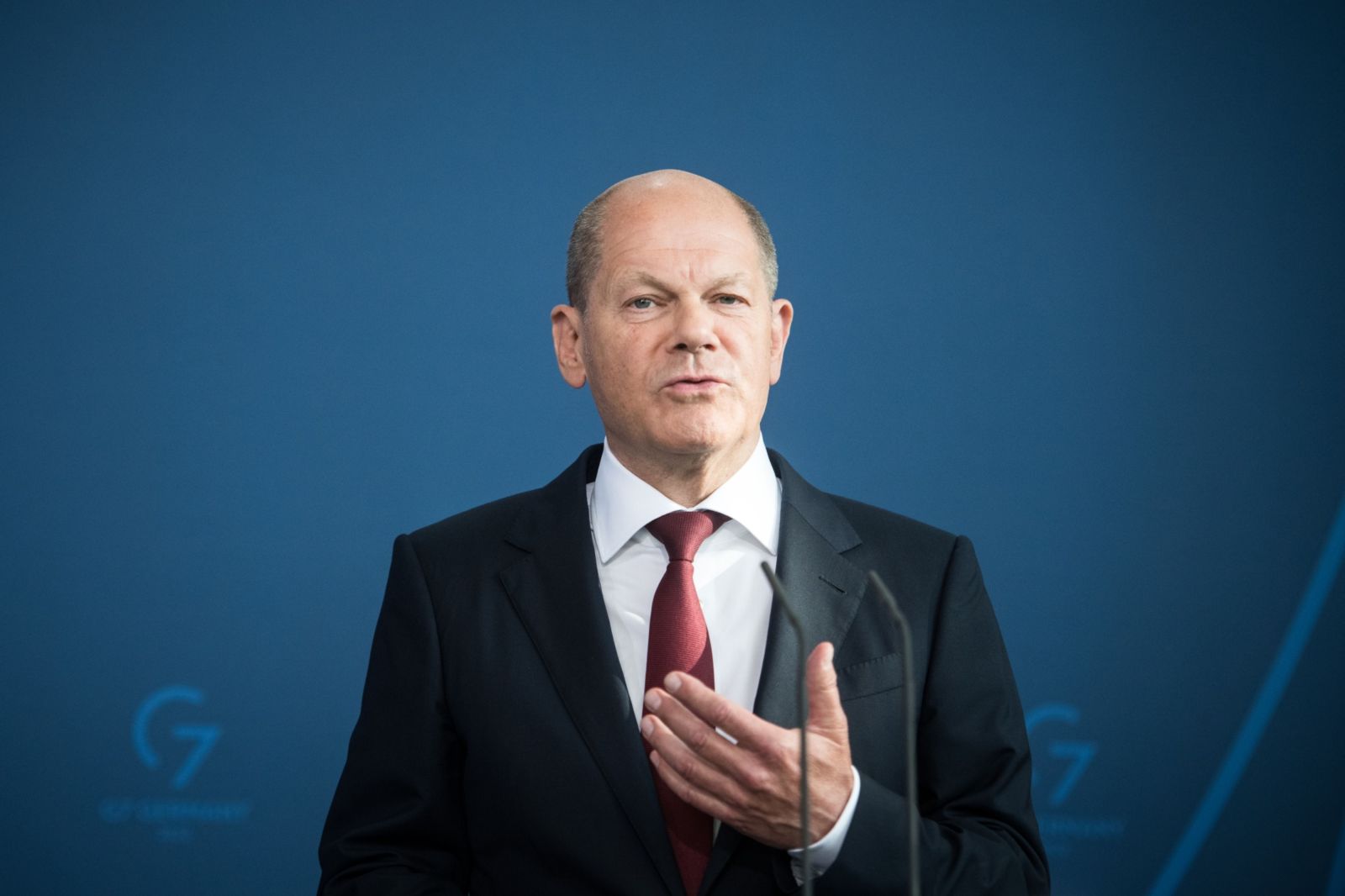 Olaf Scholz, Germany's chancellor, during a press conference with Emmanuel Macron, France's president, at the Chancellery in Berlin, Germany, on Monday, May 9, 2022. Scholz and Macron reaffirmed their commitment to support Ukraine while strengthening the European Union and announced a special summit to discuss bids by Western Balkan countries to join the bloc. Photographer: Stefanie Loos/Bloomberg

In February, the chancellor vowed to end decades of military underfunding with a debt-financed €100 billion (R1,679-billion) defence package. But since then Scholz has been criticised for being slow on weapons supplies to the government in Kyiv and holding up a European Union ban on Russian energy imports. Now even his defence upgrade is facing headwinds.

Chancellor Olaf Scholz signature policy to boost Germany’s military prowess is struggling to get off the ground.

Back in February, the 63-year-old chancellor vowed to end decades of military underfunding with a debt-financed €100 billion (R1,679-billion) defence package, dismantling the tenets on which German foreign policy long-rested since World War 2.

In addition to the votes from his centre-left coalition government, Scholz needs the backing of the main opposition conservatives to reach the two-thirds majority required to bake the new funding into the German constitution. But a vote set for this Friday had to be postponed because the parties could not agree on how the money should be spent. It’s not clear when talks will be rescheduled.

While the fund itself is probably not under threat, it may not pass the lower house of parliament, or Bundestag, until the start of next month at the earliest. Anything that looks like weakness or division among the nations supporting Ukraine will offer encouragement to Vladimir Putin. Scholz defended his plans in the Bundestag on Thursday, and called for unity.
“The special fund guarantees the freedom and security of our country during this difficult time,” he said. “It is also a clear message to friends and allies: Yes, we mean it seriously when we talk about the duty of assistance and collective defence.”

Tensions within Scholz’s own coalition became apparent during a hearing of the parliamentary defence committee last Friday. Marcus Faber, a lawmaker from the pro-business FDP, who questioned the chancellor on his Ukraine policy, stormed out of room — and headed straight to the first TV camera.

“Unfortunately, many of our questions have not been answered,” he said. “That’s why we as Liberal Democrats decided shortly after 9 a.m. to leave this meeting.”

Faber later apologised for his outburst, and his party is clearly backing the coalition plan for the special fund.

Read more: Germany Comes to Grips With Its Hard-Power Role in Europe

The fund is meant to supplement an increase in German annual defencee spending to more than 2% of gross domestic product, and would be paid for outside of the regular budget.

The Greens, who have been emboldened by gains in regional elections while Scholz’s own Socialist Democrat party suffered losses, want the package to include cyber defence, which would mean a small fraction of the money would go to the foreign ministry, rather than the defence ministry.

Frustrations were evident during a recent cabinet meeting. As Scholz was complaining about Friedrich Merz, the leader of the main opposition conservatives, for being opportunistic by planning a trip to Kyiv, Vice Chancellor Robert Habeck, the former Green party co-leader, called him out for being inept.

“I would have also done that,” Habeck was quoted by German media as grumbling.

Habeck later publicly expressed support for Merz’s trip, and made clear he expected the government to follow suit. Yet while Annalena Baerbock, the former Green party leader who is now foreign minister, has travelled to Ukraine, Scholz still hasn’t.

In an internal meeting Wednesday, Baerbock argued that €2,5 billion from the defence fund should be used for non-military purposes. She suggested the package didn’t need to be approved immediately, according to a participant who declined to be named because the deliberations were confidential.  A defence ministry spokeswoman was not available for a comment.

The Greens deny they are to blame for the postponement of the vote, and play down tensions. Instead, two party officials say that the CDU-led conservative bloc is the one opposing the package, and is stoking rumors of a coalition rift because it doesn’t want to be seen as the one shooting the plan down.

Merz has said his party will offer support if Scholz will stand by his initial pledge for all of the €100 billion flows into military projects.

Scholz and Merz sparred over the delay, during the Bundestag debate on Thursday. “Yes, we’re in talks — whether they’re good talks I’m not so sure,” Merz told parliament. “Resistance is not coming from us. It’s coming from your own government caucus.”