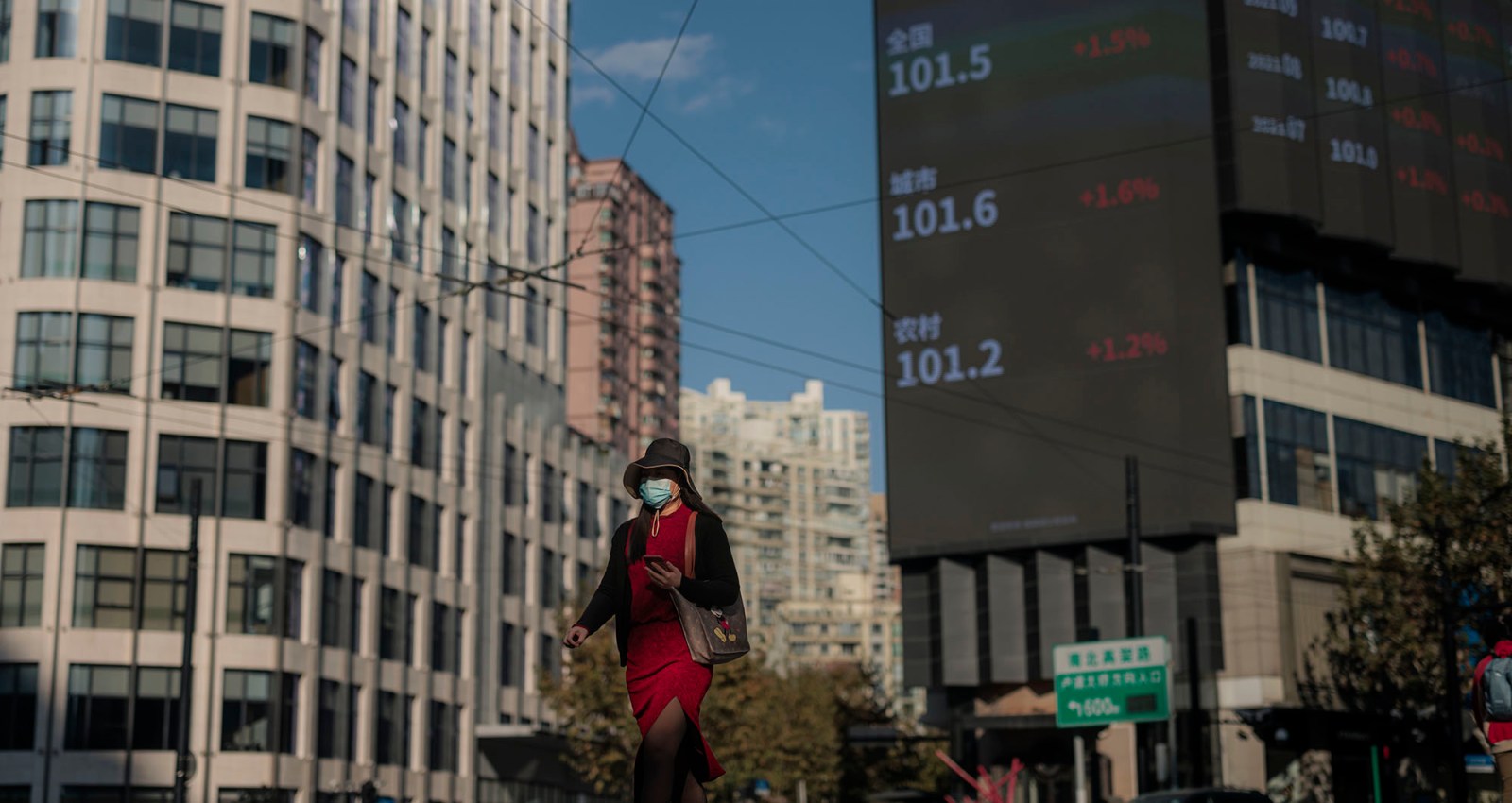 A woman walks on the street next to a large screen showing the newest stock exchange data in Shanghai, China, on 19 November 2021. (Photo: EPA-EFE / ALEX PLAVEVSKI)

China’s economy deteriorated on many fronts during April and it remains to be seen whether this will be a short-term, lockdown-related dynamic or whether longer-term forces are at play. It’s a keen reminder to South Africa – and the rest of the world – that policymakers would be well advised to find ways to alleviate their vulnerabilities to the waxing and waning fortunes of the economic giant.

All eyes have been on China’s fast-deteriorating economy over the past week, with exports, retail sales, new home prices and industrial production all coming in way below expectations. That prompted economists to further downgrade their second-quarter growth estimates for the world’s second-largest economy.

But what does that mean for the global economy and, more specifically, South Africa, with China its number one trade partner?

“There will be a global impact, since China is still the world’s factory,” says Old Mutual Multi-Managers investment strategist Izak Odendaal.  And, he adds, “China matters greatly for South Africa.”

Not only is China South Africa’s main trading partner, but industrial commodity prices depend on Chinese demand and, while still elevated and good for South Africa, they have come off as a result of Chinese lockdowns in March.

South Africa has traditionally had close relations with China and, says Odendaal, the country will face a tough choice down the line should the world split into an “Amerisphere and a Sinosphere”. For now, however, he believes it’s premature to factor in such mutually exclusive trading blocs.

Much will depend on how long China’s growth challenges prevail and how much of these can be attributed to the stringent lockdowns that have been put in place – and may extend to other cities – and how much they are a result of underlying structural trends, such as slowing population growth, in the economy.

Though the lockdowns are seen as largely behind the deterioration in economic metrics during April, and there is no sign of the government relaxing its approach to containing the virus, economists are estimating that lockdowns are not likely to last longer than a month and that Shanghai’s lockdown looks set to ease.

One economic factor the ING Group picks up on – and that is likely to bode well for China and the world – is that infrastructure investment in China has been a growth engine during the latest lockdown.

It says fixed asset investments have grown, with construction up a healthy 8.6% year on year for the year to date and investment by state-owned enterprises nearing 10% higher for the year so far.

This implies infrastructure investments are still in progress.

And, according to an economic and financial analysis published by ING this week, “this has been the only factor supporting economic growth for China during lockdown as many infrastructure projects are not in Shanghai and are, therefore, not as affected as retail sales and industrial production”.

Even more positive is that ING believes that infrastructure investment will remain a main source of growth after lockdowns end, with positive spinoffs for jobs and consumers.

The bank is also relatively sanguine on the outlook for China’s exports, which it says won’t fall “tremendously for too long”, and thus worries about China losing exports may not be valid.

Thus longer-term indicators are seemingly positive, but it again shines a light on the importance of South Africa diversifying its exposure to the Chinese economy and commodity price booms that periodically buoy the economy.

In the immediate future, the likelihood of South Africa continuing to benefit from higher commodity prices will depend on whether the upward pressures on commodity prices – namely the Russia-Ukraine war and supply issues – outweigh a reduction in China’s appetite for commodities as its economy loses momentum.

For now, it still seems the upward pressures on prices will prevail.

On a longer-term view, however, recent World Bank in-depth research into “commodity markets and their evolution, challenges and policies” highlights how important it is that countries relying on commodities to underpin their economy, like South Africa, put in place policies that address the asymmetric effects that commodity price shocks have on commodity exporters.

According to its analysis of long-term commodity price trends and their impact on economies, “large price declines hurt growth in commodity exporters much more, and in a more lasting manner, than large price increases benefit their growth”.

The World Bank identifies three categories of tools that policymakers can use to alleviate these asymmetric impacts, namely macroeconomic frameworks, measures to moderate boom-bust cycles in commodity prices, and structural policies to reduce vulnerabilities to price volatility.

It argues that macroeconomic policy frameworks that are oriented toward longer-term sustainability, such as countercyclical fiscal policy, offer the best protection against commodity price volatility.

One way many resource-revenue dependent economies have done this is to set up a sovereign wealth fund, of which there are 12 on the African continent and others in Norway and Middle Eastern countries, through which they manage their windfall revenues accumulated during oil or other commodity price booms and avoid the so-called resource curse.

These investment vehicles ring-fence resource revenues by setting up a designated fund that is subject to stringent fiscal rules.

In an article on whether South Africa should set up a sovereign wealth fund, Environmental and Social Consultant at IBIS Consulting, Chelsea Markowitz, explains: “Stabilisation funds otherwise face the risk of succumbing to political pressures to spend when resource revenues are high, counteracting their countercyclical purpose.

“Designing fiscal rules that allow leniency for exceptional debt crises or development pressures, without allowing this leniency to be manipulated for purposes such as regular debt repayment and additional borrowing, remains a difficult and uniquely contextual challenge for these funds.”

Setting up a sovereign wealth fund is, however, only feasible if two prerequisites are met: the government is running a budget surplus, and government debt is low – neither of which South Africa meets.

According to the medium-term budget framework, the country will achieve a primary budget surplus by 2023/24, but the consolidated budget deficit will only narrow to 4.2% of GDP and thus remain negative within the MTBPS timeframe.

However, sustainability is all about looking to the long term and, with all the evidence pointing to how important it is to put these kinds of stabilisation structures in place, once the country does manage to overcome its fiscal challenges, setting up a sovereign wealth fund should be government’s first priority.

Only then will South Africa be able to alleviate its current reliance on China’s waxing and waning demand for its commodity exports and economic fortunes. BM/DM