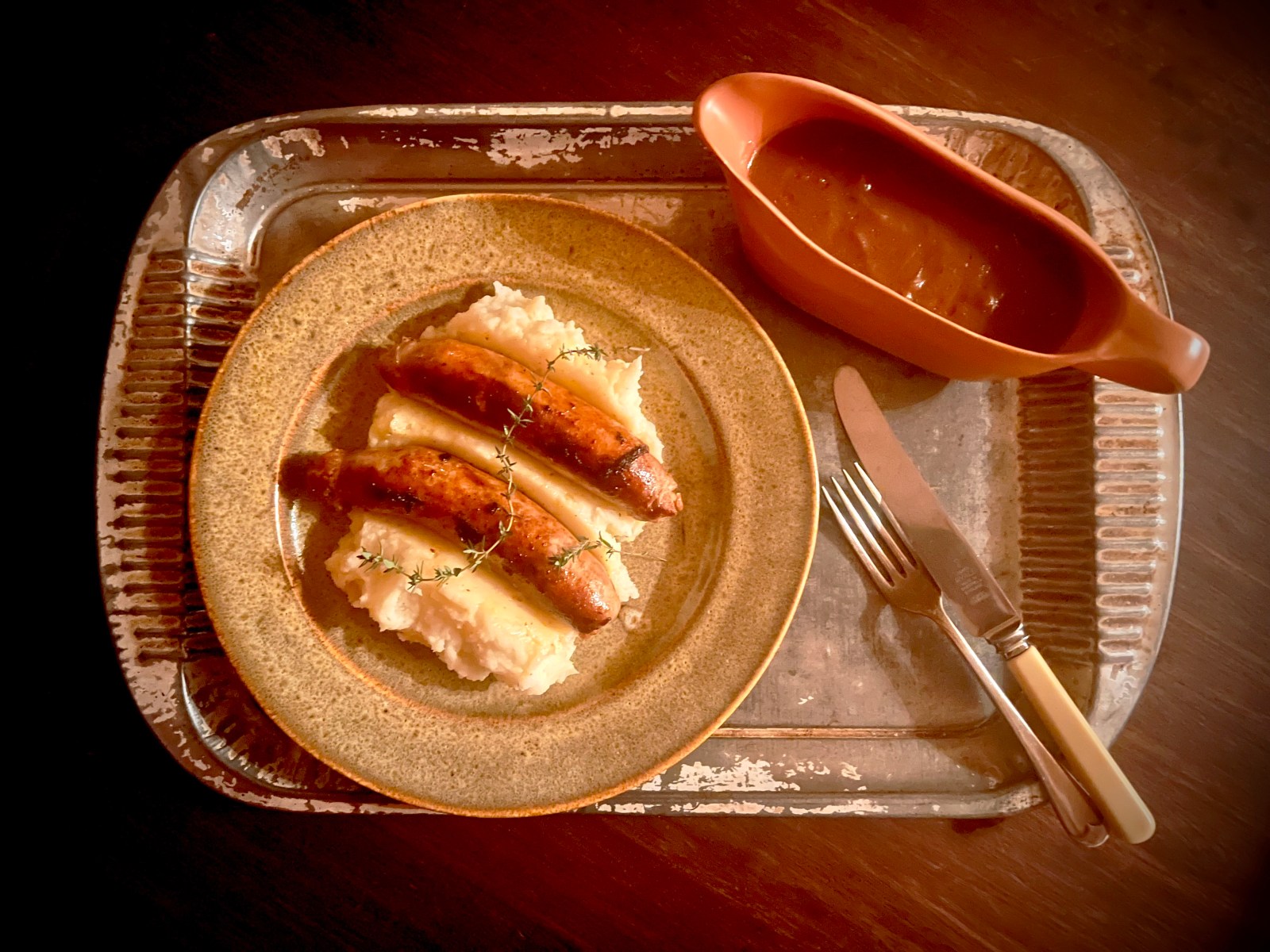 Golden brown pork bangers, also called breakfast sausages, served on top of a pile of fluffy mashed potato with a classic onion gravy, are one of life’s simple pleasures.

Bread and dripping, bangers and mash: these are things steeped in the British psyche and redolent or war and rationing. During the years of rationing that followed World War II, people would keep their leftover fat from a beef roast (if they were extremely lucky enough to afford that) and bacon fat (ditto) and use it again to cook something else in, or to use it as a spread, on meagre and most likely stale slices of war-time bread.

My own Yorkshire mother, who had been in the Land Army in Wales during the war, still kept the dripping from our Sunday beef roasts throughout the 60s, and it was quite usual for me to have beef dripping on my school sandwiches when the other kids had peanut butter or apricot jam. And I wasn’t complaining.

The pork banger has its origin, or at least the origin of its name, in the earlier war we know today as World War I but which at the time was called the Great War.

You know the terrible habit some bacon manufacturers have of adding water to the mix to make them go further (and make them more money), which some unscrupulous chicken producers do to their whole birds as well, as anyone who has eaten a British supermarket chicken will tell you? That used to happen to pork sausages too, more than 100 years ago, when Britain was finally coming out of that devastating war. Water was added to the sausages to contend with the shortage of meat. When cooked, the water would cause the casings to explode, hence the term “banger”.

Which brings me to the pork bangers I made last weekend. Not just cooked: thanks to a charcuterie and sausage-making course by my old mate Mike Crewe-Brown of Wickedfood Earth Country Cooking School in Hekpoort (he’s taken the school on tour and was in Cradock), I found myself part of a crew of aspirant sausage makers turning out beautiful pork sausages. My teammate Bandile Ncunyana, an East London businessman, and I were allocated the classic breakfast sausage, and that’s what we made. But more about all that in my Karoo Dreaming column in TGIFood tomorrow (Friday May 20). So the bangers in that picture up there are the ones Bandile and I made, flavoured with plenty of black pepper and fresh garlic.

But the secret to bangers and mash doesn’t only lie with the perfect pork sausage. It needs fluffy, creamy mashed potato too, and to finish off it deserves a good dolloping of a traditional British onion gravy.

Everyone has their own way with their idea of perfect mashed potato. I keep mine simple and make it all about the butter. I don’t use cream in it. I have even stopped adding milk (after a lifetime of doing so; I much prefer them without these days). I compensate with extra butter.

The secret, for me, is to boil the potatoes until perfectly soft, quickly drain them, toss them around in the hot pan on the heat for a few seconds to get rid of excess water, and then mash them twice: first with whatever masher you normally use, and then with a strong fork, which, with vigorous stirring with the pan tilted at a 45 degree angle, really cuts through all possible lumps. All it needs is a little elbow grease and then a bit more.

While the mash is still hot, I stir in (using the same fork) a generous amount of butter, and then season them well with salt and white pepper. I’d recommend at least a heaped tablespoon of butter per every medium potato, and a bit more for luck. Milk, I believe, makes them less fluffy. And I’m not convinced that cream adds something to the fluffy character and taste of mashed potato. It just makes them, well, creamy… don’t you prefer them fluffy? And it’s not as if there aren’t enough calories in there as it is.

This, though, is not a recipe for actually making the sausages (more about that on Friday) but for cooking them with mashed potato and onion gravy.

Salt for boiling the potatoes

Salt and pepper to taste, for the potatoes

For the onion gravy:

Fresh thyme leaves, picked from their stems (at least 4 or 5 sprigs)

1 heaped tsp cornstarch dissolved in milk, stirred until there are no lumps left

Put the peeled and halved potatoes in a pot of plenty of cold water and salt generously. Bring to a boil and cook until tender. Drain, then return them to the pot and toss them around on the heat to get rid of residual water. Mash them very well, stir in plenty of butter and season with salt and pepper. You can keep it to one side and reheat quickly, while stirring, when everything else is ready.

Cook the sausages your preferred way, if you’re in the habit of doing a cracking (but not banging) good job of that. I recommend slow frying on a gentle heat, turning and following my tips above.

Meanwhile, caramelise the sliced onions in butter slowly over a very low heat for up to half an hour, with the sugar and thyme leaves, until they are lightly browned and packed with caramelised flavour. Shortening the time and cooking at a higher heat will only reduce the depth of flavour.

Add the beef stock, port and mustard (stir it in, it will dissolve quickly) and reduce gently until the gravy thickens and its flavours intensify significantly. Season with salt and pepper to taste, stir in the cornstarch and stir the gravy while it thickens, for about three minutes. Taste and adjust seasoning if necessary.

Serve a pile of mashed potato with two or three bangers cuddled on top, and don’t be too shy with the onion gravy. DM/TGIFood