The People: Battle to save water last straw for Nelson Mandela Bay’s residents 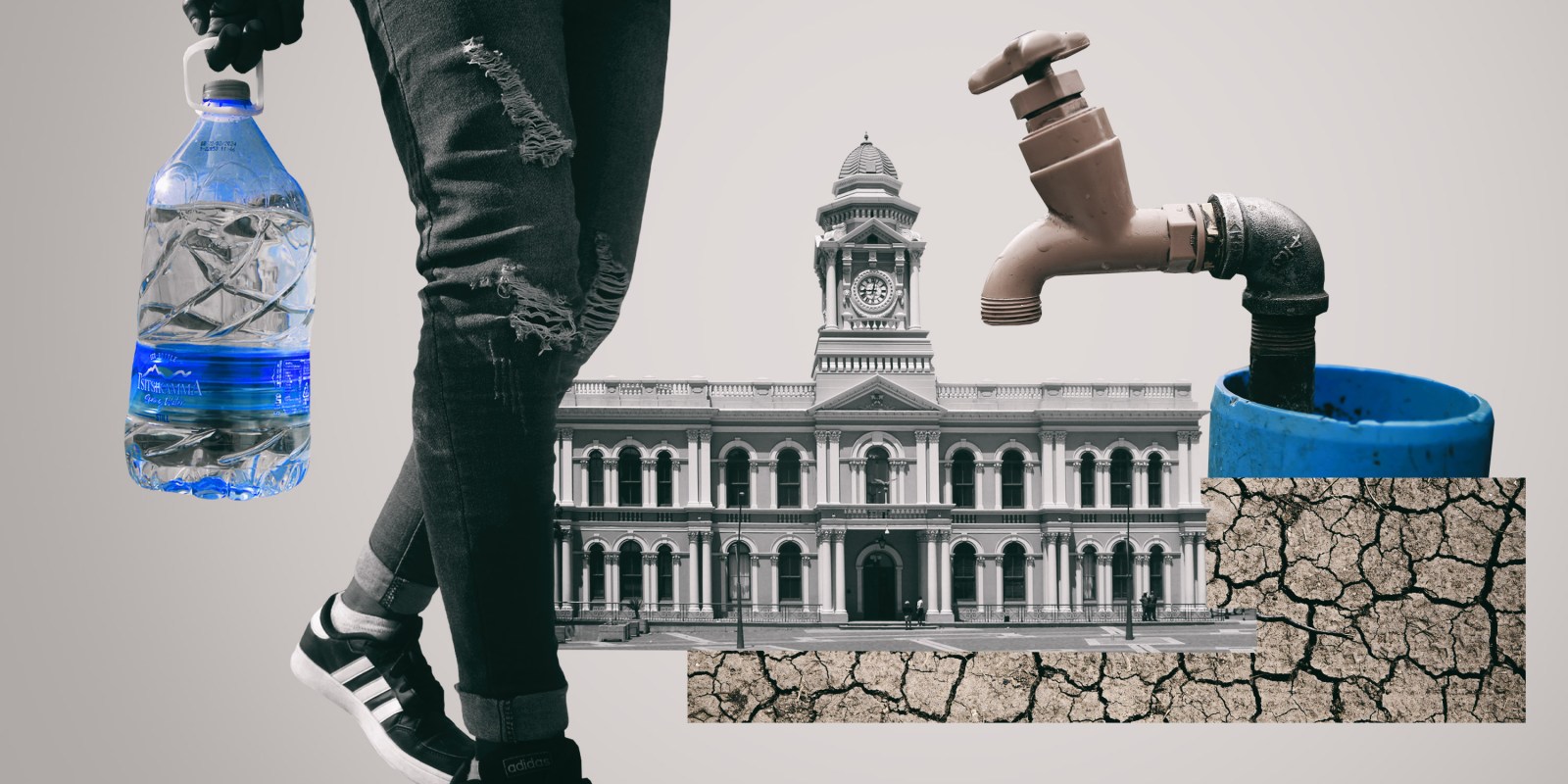 A city brought to its knees by political shenanigans, unemployment and a vicious second wave of Covid-19 is in the grip of the worst drought in its history. But there is only so much that people can take — and saving water might not be high on their list of priorities as they battle to survive.

‘I think people simply cannot take one more thing,” sociologist Deon Pretorius said when asked for his thoughts on why, despite years of requests, billboards and radio advertisements, the water use of households in Nelson Mandela Bay remains stubbornly high.

The municipality has been trying to convince people to use 50 litres of water per person per day — but without much success. This, Pretorius explained, was partially due to the political shenanigans that have become a trademark of the politically unstable metro.

“The social compact in Nelson Mandela Bay is completely broken. I think there are many people who are working very hard, but constant setbacks like this just leave them with the persistent feeling that they are not making any progress,” he said.

Pretorius said managing this crisis cannot be left to the politicians. “What we need now is multisectoral leadership. Everybody in Nelson Mandela Bay must take hands.”

The metro faced a devastating second wave of Covid-19 in October and November of 2020 when it was the epicentre of the outbreak driven by the Beta variant of the virus. It also battles unemployment rates in excess of 40% and has a persistently unstable local government.

Denise van Huyssteen, the CEO of the Nelson Mandela Bay Business Chamber, said hospitals, businesses, restaurants and residents in the affected areas would be hard hit once taps run dry.

“Many will not be able to use their toilets at home and/or at work, due to a water and sanitation lockdown. This is an emergency and to prevent this disaster from happening we must radically reduce our water consumption levels now.

“If we don’t save water, we will have a health crisis on our hands.”

“The severity of the city’s water supply requires people not to allow others, who may not be directly impacted, to put us into a water and sanitation lockdown through their unacceptable actions.

“As a show of ubuntu, as responsible citizens, residents should refrain from selling municipal water, as this is stealing. Selling borehole water is also prohibited as it is illegal to do so.

“Residents are also required not to top up their swimming pools with municipal water, but rather collect water from designated municipal boreholes. Additionally, residents should not bypass their water meters as this is illegal and carries a fine.”

Van Huyssteen said it was vital that the municipality accelerated its efforts to resolve water leaks, which accounted for around 35% of the metro’s water losses.

“Council has approved the adjustment budget and it is critical that funds are now prioritised to get some urgency behind resolving the water leaks.” 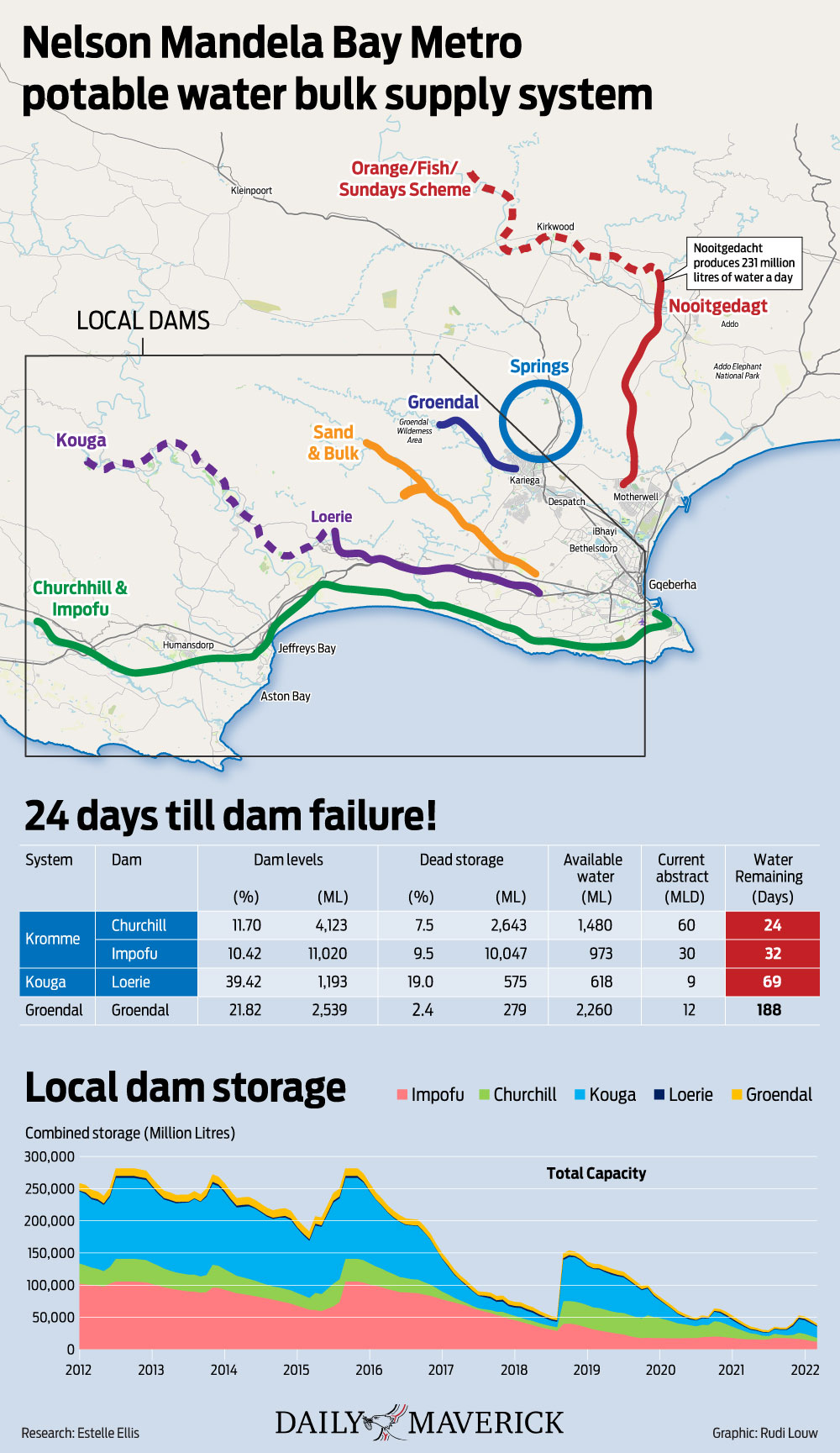 Siyabulela Mama from the Water Crisis Committee, a community-driven initiative, said they were appalled by the “hypocrisy of the Nelson Mandela Bay Municipality, to say they are handling the situation very well on live television, while they failed to honour an invite from residents to get this assurance.

“People are getting sick from the water, dams are running dry and most reservoirs are starting to reach 0%. This is a situation that could have been avoided five years ago if the money allocated by the Treasury to fix the ailing infrastructure was put to good use.

“How is the situation under control when children die and people get sick from an overdose of E. coli in the water? And there has been no plan to review and look into this?”

Mama was referring to the municipality’s failure to produce safe potable water. After months of occasional warnings and a week of worrying results, the municipality released a “boil before drinking” notice in March. It was found that the Grassridge Temporary Treatment Works, a drought mitigation measure, was the source of the E. coli contamination.

Mama said the municipality must talk to people and answer questions.

So far the executive mayor, Eugené Johnson, has held one public meeting, at which there was no chance for residents to ask questions.

“The paradox is that we are expecting Day Zero by June, while boreholes will be [connected] in August — in a crisis that the municipality argues has been in existence for seven years now. This just proves the inept bungling and unpreparedness of this municipality in dealing with this water crisis,” Mama said.

“They say they are fixing leaks. Maybe 1,000 leaks a week. If we take them at their word, then they are simply dealing with a crisis they cannot manage on their own. They are in over their heads. This crisis would not be fixed even if they could handle all the leaks in a timely manner. The entire water system needs to be overhauled

“Residents complain that a truck would pass a water leak if it is not reported to the municipality and does not have a case number… Imagine that. In the midst of the water crisis. But they have the audacity to go on live television and claim that they have the situation under control.

“As the Water Crisis Committee, we will continue to mount the pressure until this bunch of bunglers stop sleeping on the job.”

The committee has three big demands: “Bring proof that the water is now safe to drink, and one house, one JoJo tank, as well as a truck that will bring clean water to communities every day,” Mama said. DM/MC

The People: Battle to save water last straw for Nelson Mandela Bay’s residents