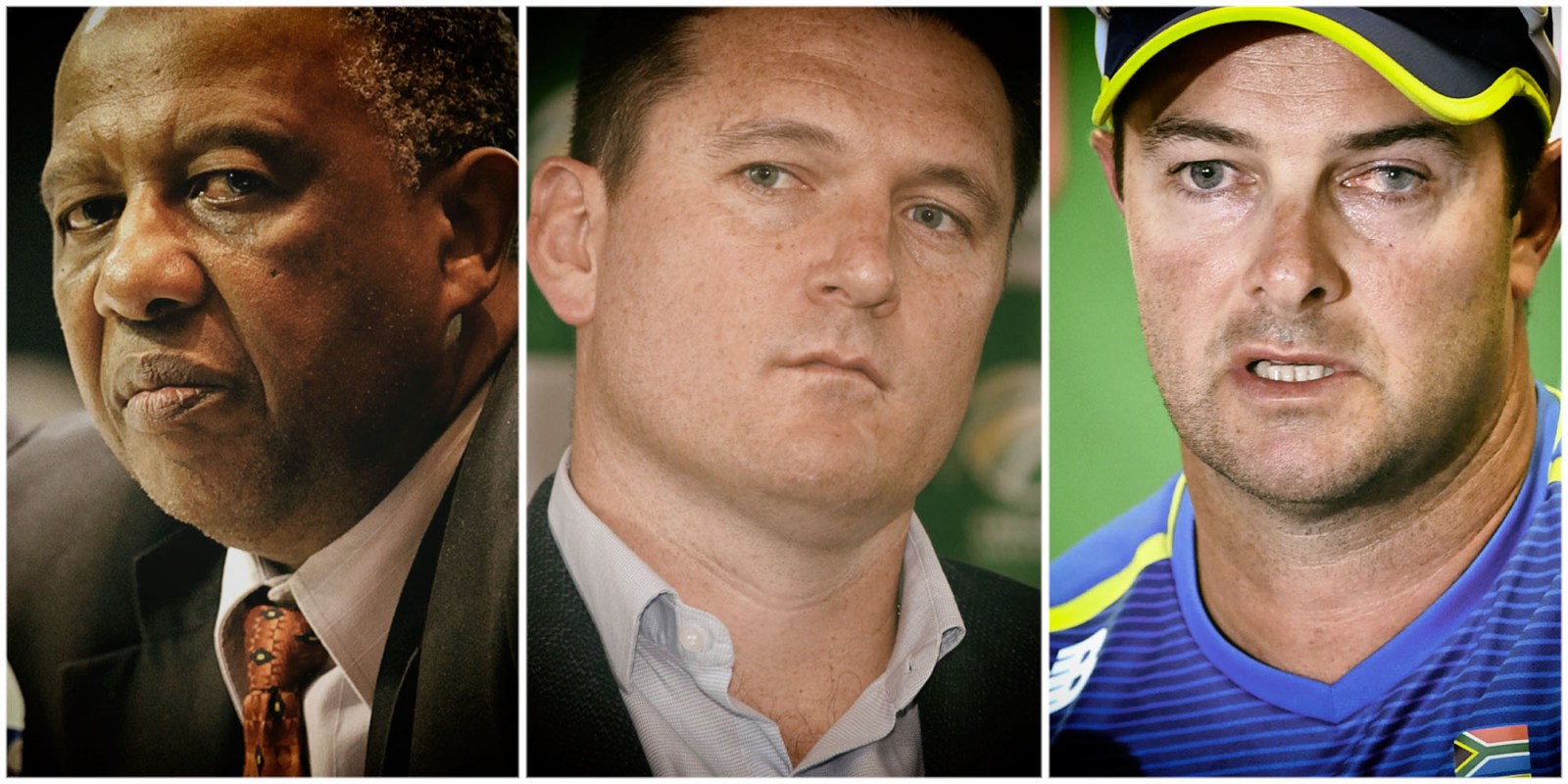 Cricket South Africa and Proteas coach Mark Boucher have set aside their differences, but lingering questions about the Social Justice and Nation Building process remain.

Cricket South Africa (CSA) has formally given its full support to Proteas coach Mark Boucher just four months after stating in a charge sheet against him, that there was “an irretrievable breakdown in trust” with the coach.

Of course, circumstances have changed since that time and disciplinary charges contained in the aforementioned document were dropped last week. Boucher had been accused of three acts of gross misconduct and the basis of each charge was his actions were underpinned by racial discrimination.

Those charges were based on the “tentative findings” of last year’s hearings into past racial discrimination in cricket — the Social Justice and Nation Building (SJN) hearings. The SJN was chaired by advocate Dumisa Ntsebeza SC and in the months after it closed and since an “interim report” was tacitly accepted by the CSA board, controversy has followed.

Basing a disciplinary charge on a “tentative finding” that came out of a flawed process, was the legal equivalent of facing peak Dale Steyn on a green top, without pads and a helmet, while wearing flip flops. Naturally the case collapsed and CSA was left in an uncomfortable position.

That came just weeks after it lost an arbitration case with costs against former director of cricket Graeme Smith over similar findings of “tentative racism” in the SJN.

While CSA made a strong defence for their approach in the wake of the SJN report, they appear to have decided to move on. Boucher and Smith have been reputationally tarnished, but in a spirit seldom displayed at the SJN, CSA has at least extended an olive branch towards reconciliation.

“Now that the matter is now resolved, Mr Boucher has the support of CSA and CSA is confident that the Proteas team will continue to make strides towards building a culture of mutual respect and inclusivity,” a statement from CSA read.

“Mr Boucher has confirmed to CSA that he intends to fulfil the remainder of his contract, which ends after the 2023 World Cup. CSA looks forward to Mr Boucher guiding the Proteas team to their first World Test Championship Final, in June 2023.”

But what of the SJN report, which failed to make any meaningful recommendations? The few findings of “tentative racism” against Smith, Boucher, AB de Villiers (who wasn’t pursued by CSA as he is not an employee) and one or two others have failed everyone.

The entire process, including the 235-page ‘interim report’ (there is no sign of a final report) that took months and cost R7.5-million, has been left hanging like an unfinished sentence. It is incomplete (hence the “tentative findings”) and begs the question as to whether it should have been published at all in its current state.

Which is why there is some merit for CSA to consider a full audit of the SJN process.

An audit could be done via an external company, the cost of which could be covered by several millions of rands CSA committed to spending, and would have spent, on the Boucher hearing. Alternatively, CSA’s own risk and audit committee should undertake the task.

Ideally, the SJN report should only have made ‘recommendations’ and not findings. Legally making ‘findings’ requires a robust presentation, examination and testing of evidence.

Yet, the ombudsman acknowledged in the conclusion of his report that he was unable to properly test the evidence through cross-examination in the time provided. This was inadequate in the circumstances, thereby rendering the entire process questionable and the “findings” tenuous at best.

The fact that the SJN’s Terms of Reference were frequently breached is reason enough to question the entire process. Simple, but vital aspects such as language used, were also massively important and worth revisiting.

On several occasions throughout the hearings, and in the Terms of Reference itself, the Ombudsman referred to complainants as ‘victims’ and respondents as ‘perpetrators.’ Those words painted a picture of guilt and innocence despite no immediate cross-examination.

The Ombudsman and his assistant frequently gave media interviews, demonstrating sympathy for the complainants even before evidence had been properly assessed and findings articulated.

It also later emerged how little time respondents were given to issue statements in response to accusations levelled at them. Documents requested were provided late and, on occasion, not at all.

Another example is how the Ombudsman admitted during the proceedings that he had erred by allowing convicted match-fixers to introduce testimony at the SJN.

Thami Tsolekile, Lonwabo Tsotsobe, Ethy Mbhalati and Alviro Petersen were permitted to introduce the match-fixing scandal into their SJN statements and led extensive evidence on the matter. They might have also perjured themselves in the process.

After a lengthy and meticulous investigation in 2016, the quartet all agreed to bans from cricket for between two and 12 years in an entirely different process run and concluded years before by CSA.

At the SJN though, Tsolekile claimed the investigation, led by Louis Cole and former ICC head of legal, David Becker, was racist. The ex-players claimed they were “coerced” and “threatened” into accepting their bans by Cole and Becker.

That was patently untrue, and Cole and Becker were compelled to waste three days in the stand, and hundreds of hours preparing affidavits, to refute these claims, which were way outside of the SJN’s Terms of Reference.

After days of watching it unfold, and perhaps recognising that the claims were far-fetched, Ntsebeza ultimately conceded: “Even with the players, I sought to communicate that there was a time and a place and, as per my mandate, this wasn’t the place for them to talk about match-fixing. I was alarmed (by) half of the presentations made before us and I asked myself where this was going.

“I’m not going to spend a lot of time on it as my gut feeling is that I allowed a runaway horse to get out of the stable. It’s like it’s a red herring. It has taken my concentration off what should be my mandate.”

However, as CSA has been quick to point out, Ntsebeza controlled the process. He could have elected to halt or redirect that process at any time. He chose not to.

From its genesis, the SJN was mired in controversy — when soon-to-be ousted board member Eugenia Kula-Ameyaw hastily established it — at a time when the board’s gross lack of fiduciary care was exposed. In her evidence, she proclaimed that she was the one who appointed the Ombudsman.

It was no surprise that she was the first person to give evidence and then made a lavish gesture of handing the Ombudsman a gift, which was highly irregular.

By the time an interim board was in place, it had to put the brakes on the SJN going ahead because a number of key aspects relating to the Terms of Reference had yet to be resolved and properly articulated.

And later, even when there was an accepted Terms of Reference and the interim board handed control back to the new board in July 2021, concerns were raised about the process.

The SJN report submitted to CSA last December was criticised and it has subsequently emerged that at least one crucial statement had been botched. An incorrect version of Paul Adams’s statement, which formed the basis for one of the controversial charges against Boucher, had been used in the SJN process.

In his final statement to the SJN, Adams never mentioned Boucher by name, but in an earlier statement, which he withdrew, he had used Boucher’ s name. In the final SJN report and during Adams’ testimony, the Office of the Ombudsman used his first, and therefore incorrect statement.

There are many other issues of inconsistency and, possibly even bias, during the SJN process that need to be addressed because it undermines not only the respondents, but also the complainants.

CSA naturally, and correctly did not intervene in the process carried out by the Ombudsman. But it has now been left with huge question marks over a process it rubber-stamped and openly endorsed.

In a matter as sensitive and far-reaching as this, all those involved — both complainants and respondents — deserved a fair and robust process. The evidence appears to be that they did not get it.

As much as CSA wants to draw a line under this chapter, they need to act responsibly and undertake a final and independent review of the SJN process to ensure full closure.

Mistakes were made, with significant consequences, and there are undoubtedly lessons to be learned. DM