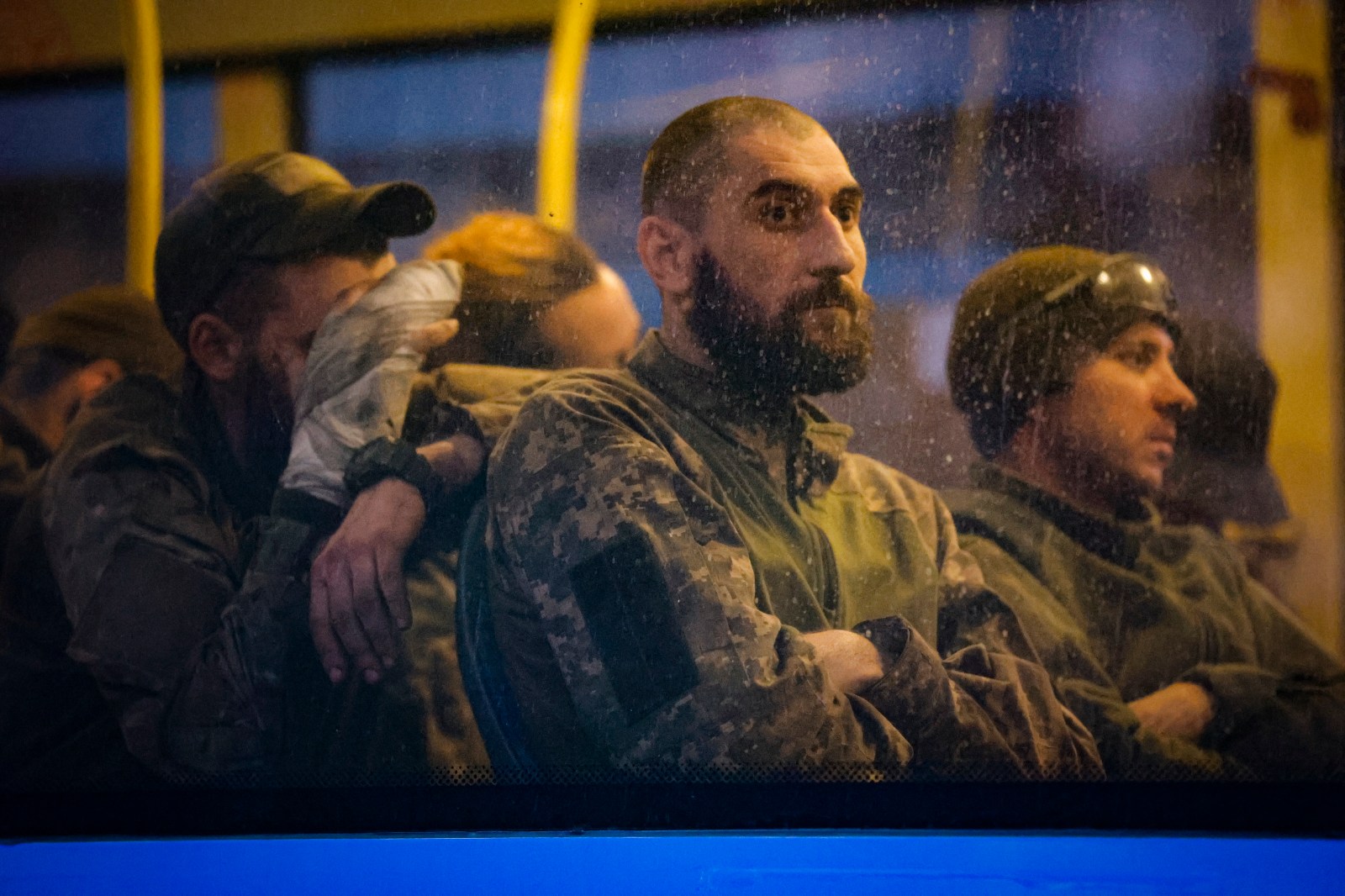 Ukrainian servicemen sitting in a bus as they are being evacuated from the besieged Azovstal steel plant in Mariupol, Ukraine, 17 May 2022. A total of 265 Ukrainian militants, including 51 seriously wounded, have laid down arms and surrendered to Russian forces, the Russian Ministry of Defence said on 17 May 2022. Those in need of medical assistance were sent for treatment to a hospital in Novoazovsk, the ministry states further. Russian President Putin on 21 April 2022 ordered his Defence Minister to not storm but to blockade the plant where a number of Ukrainian fighters were holding out. On 24 February, Russian troops invaded Ukrainian territory starting a conflict that has provoked destruction and a humanitarian crisis. According to the UNHCR, more than six million refugees have fled Ukraine, and a further 7.7 million people have been displaced internally within Ukraine since. EPA-EFE/ALESSANDRO GUERRA

LONDON, May 18 (Reuters) - Top-ranking Ukrainian commanders have not yet surrendered from the labyrinth of bunkers and tunnels below the Azovstal steel works in Mariupol, the leader of the Russian-backed separatist region of Donetsk said on Wednesday.

As the most devastating siege in Russia’s invasion moves towards a finale, nearly 1,000 Ukrainian fighters who barricaded themselves into the tunnels have so far given themselves up to Russian and pro-Russian forces since Monday.

Russia’s defence ministry said that in the past day 694 Ukrainian fighters – including members of the Azov regiment – had surrendered, including 29 wounded.

It was unclear if the top commanders would leave the plant, or possibly even fight a last mortal battle with the Russian forces they regard as occupiers of their motherland.

“There are no commanders of the highest level (among those who surrendered) – they have not left,” said Denis Pushilin, head of the breakaway Donetsk People’s Republic which was officially recognised by President Vladimir Putin just three days before the invasion of Ukraine.

“That is – so far,” Pushilin, who along with Russian forces controls Mariupol, was quoted as saying by the Donetsk News Agency, known as DAN.

It was unclear what would happen to the fighters who were cast by Ukrainian President Volodymyr Zelenskiy as heroic resistance fighters but who Russian lawmakers said were “Nazi criminals” who should face the gravest punishment, even death.

Pushilin said the fate of the surrendered Ukrainian fighters would be decided by the courts.

Moscow says the Azov Regiment, which began as an extreme-right nationalist paramilitary organisation, is a group of radically anti-Russian nationalist fighters and casts them as modern-day Nazi sympathisers.

The regiment, formed in 2014 as a militia to fight Russian-backed separatists, denies being fascist, racist or neo-Nazi, and Ukraine says it has been reformed away from its radical nationalist origins to be integrated into the National Guard. Read full story

President Vladimir Putin said what he calls a special military operation was necessary in Ukraine to prevent the persecution of Russian speakers and to prevent the United States using Ukraine to threaten Russia.

Ukraine says Putin is trying to steal the country and denies that Kyiv persecuted Russian speakers.

The Kremlin said the combatants would be treated in line with international norms. Ukraine has said there will be a prisoner of war exchange.

Civilians who sheltered in the bunkers spoke of desperate conditions in the bunkers. Some of the fighters endured horrific battle injuries.