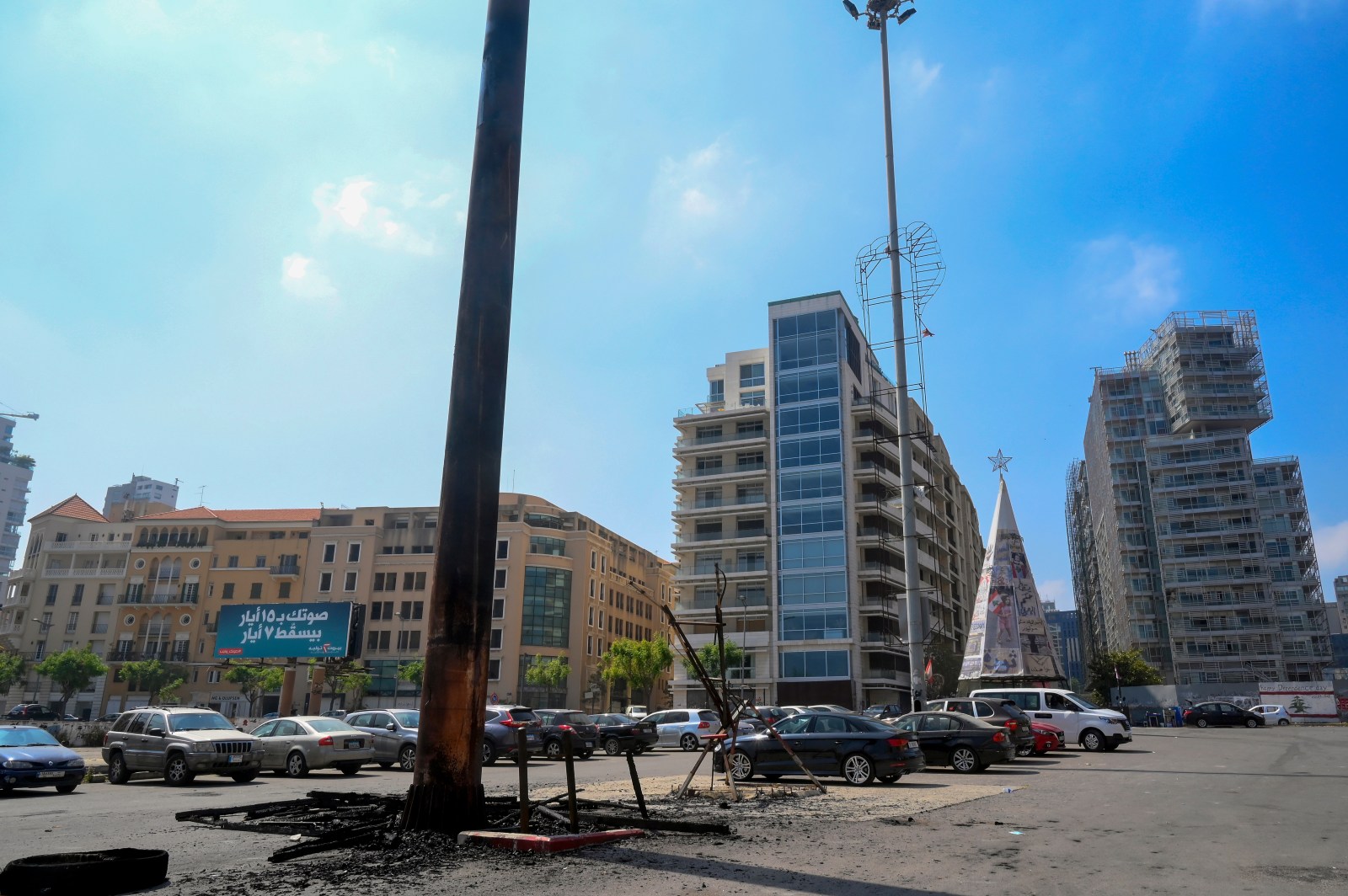 The pole that supported the Revolution Fist, the symbol of Lebanon's uprising, is surrounded by ashes after the installation was set on fire, reportedly by supporters of the Hezbollah and Amal movements, in the aftermath of the Lebanese elections, in Martyrs' Square, Beirut, Lebanon, 17 May 2022. EPA-EFE/WAEL HAMZEH

May 17 (Reuters) - Iran-backed Hezbollah and its allies have lost their majority in Lebanon's parliament in a general election, a Reuters tally of final results showed on Tuesday, a major blow to the heavily armed group that reflects anger with Lebanon's ruling elite.

The Shi’ite Muslim movement and factions that support its possession of arms won around 62 of parliament’s 128 seats in Sunday’s election, a reversal of the 2018 result when they secured a majority of 71.

In the first election since Lebanon’s economic collapse and the Beirut port explosion of 2020, reform-minded political newcomers won about a dozen seats, making an unexpectedly strong breakthrough into a system long dominated by the same groups.

The results leave parliament split into several camps, none of which have a majority, raising the prospect of political paralysis and tensions that could delay reforms needed to steer the country out of its devastating economic crisis.

While the 2018 election pulled Lebanon closer into the orbit of Shi’ite Muslim-led Iran, these results could open the way for Saudi Arabia to reassert influence in a country that has long been an arena for its regional rivalry with Tehran.

The final results on Tuesday included a record of eight women lawmakers – nearly half of them newcomers.

“CRACK IN THE WALL”

United Nations Secretary-General António Guterres called in a statement late on Monday for the swift formation of an inclusive government to stabilize the economy.

Sami Atallah, director of The Policy Initiative, a Beirut-based think tank, said that was unlikely.

He said groups within the “polarised parliament” would lock horns when electing a parliamentary speaker, naming the next prime minister and voting on a president later this year.

And while Hezbollah and the allied Amal Movement maintained their control of the 27 Shi’ite-allocated seats, they lost two seats in their traditional stronghold of south Lebanon.

Atallah said that could push them to take a hardline stance: “They don’t want to have a crack in the wall.”

Overnight, large crowds carrying Hezbollah flags gathered in downtown Beirut, chanting in support of the group, according to footage posted on social media. Reuters could not independently verify the videos.

By the morning, a giant cardboard fist in downtown Beirut that was first erected when protests against the ruling establishment erupted three years ago appeared to have been torn down and burned, according to a Reuters witness.

The 2019 demonstrations reflected anger at a political class seen as corrupt and inefficient. Since then, the country has plunged into an economic crisis that the World Bank has described as one of the worst since the Industrial Revolution.

The local currency has lost more than 90 percent of its value, reaching 30,000 pounds to the U.S. dollar on Tuesday – roughly a 10% loss since Sunday’s election.

But Lebanon’s central bank said on Tuesday it would continue to allow commercial banks to purchase dollars on its Sayrafa platform rate “without amendment,” an operation that has helped stabilize the exchange rate since it began in January.

The economic decline has pushed nearly three-quarters of Lebanon’s population under the poverty line, which election observers had warned could open the door to more vote-buying.

In a preliminary statement on Tuesday, the European Union Election Observation Mission said the poll had been “overshadowed by widespread practices of vote-buying, clientelism and corruption”.

By Laila Bassam and Timour Azhari