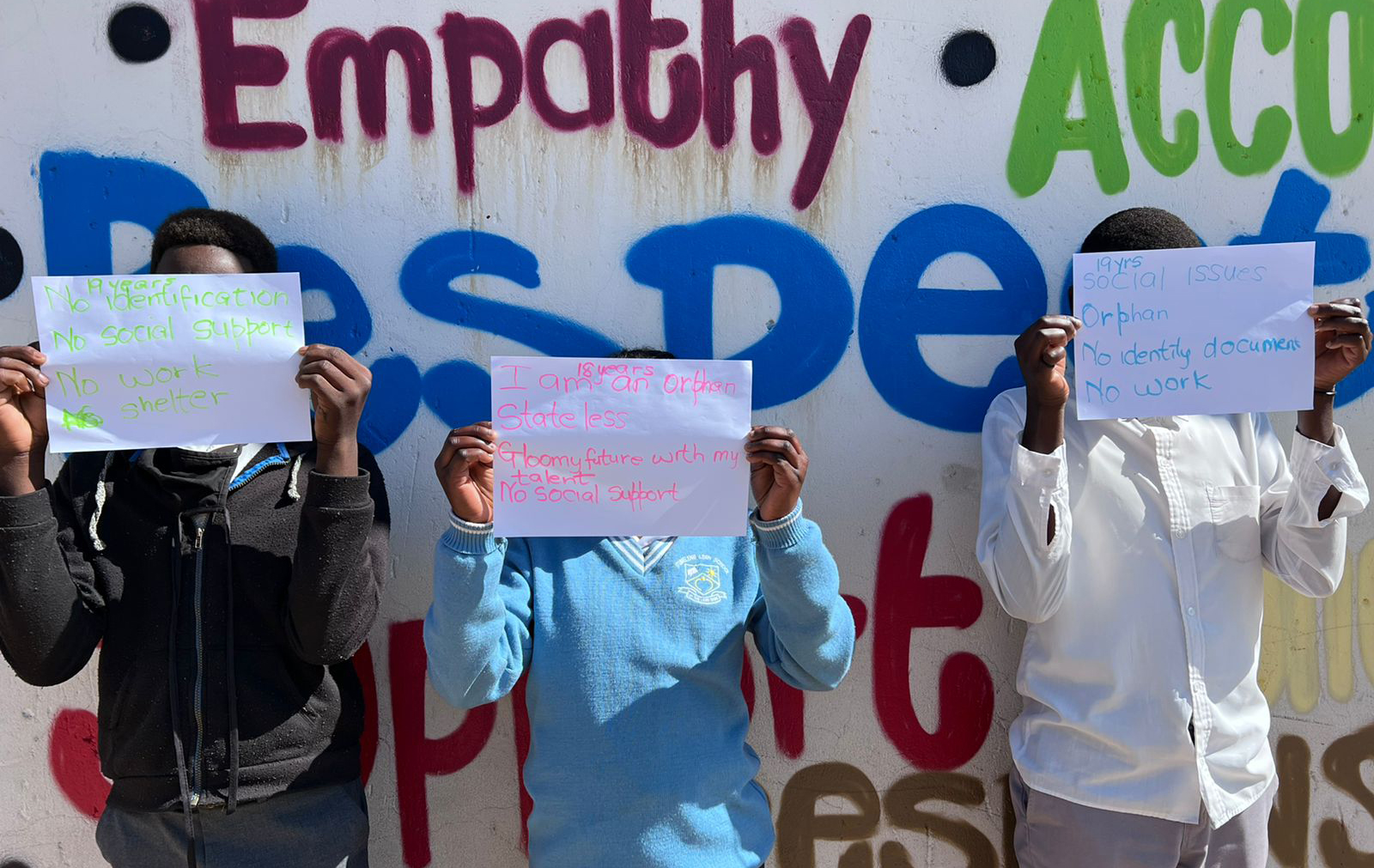 Learners from Itumeleng school in Gauteng have been struggling to get their IDs from Home Affairs for years. (Photo: Supplied by GroundUp)

The state is denying learners their rights, says lawyer.

The future is uncertain for 18-year-old Dudu Setoe who has never had a birth certificate or an Identity Document (ID) despite many back-and-forths to Home Affairs offices. Although Setoe recently came first in an in-house athletics competition, she is unable to compete provincially or nationally because she can’t present these crucial documents.

Setoe, three other learners and one former learner at Itumeleng school for intellectually disabled children in Gauteng have struggled for years with the Department of Home Affairs (DHA) to get their IDs without any success.

Setoe, who plays netball and also runs the 200m and 400m sprint, said that she becomes herself when she is playing sport.

Setoe was never registered at birth. Her mother is deceased and her father is unknown. Her foster parent, Armando Setoe, said to GroundUp that he and the school have been trying to get her ID for four years but that they are now at their wits’ end.

The five are now at risk of statelessness, which means they will not be able to access rights such as access to education, healthcare, or job opportunities, according to Lawyer for Human Rights. (The learners were born in South Africa and probably even had South African parents. But some of them were abandoned as children and others are orphans.)

Zoleka Joyi, deputy principal at Itumeleng School in Westonaria, said that after years they have reached a dead-end trying to assist the learners. Joyi even lodged a complaint with the South African Human Rights Commission (SAHRC) about one of the learners, but the SAHRC said in a letter that they could not assist since the matter “falls under the jurisdiction of [Home Affairs]”.

Joyi said they have visited and called Home Affairs offices many times but this has not helped. “We still have no solution to this problem,” she said to GroundUp.

There are various reasons the learners have not been able to receive their IDs, but in most cases it comes down to “systemic and bureaucratic failures”, according to Thandeka Chauke, the head of the Statelessness Project at Lawyers for Human Rights.

The former learner is an orphan with a birth certificate that does not show up on the Home Affairs system. Joyi said that the school is worried about what the future will hold for him without an ID, since he left the schooling system at the end of 2021.

In one case the high cost of a DNA test of a family member is prohibiting a learner from getting his ID.

Chauke said that Lawyers for Human Rights have dealt with many cases that are similar to this. But this case is a “huge concern”, she said, because it involves particularly vulnerable children who are denied access to their human rights.

“The department has a constitutional and statutory mandate to provide services to the public. And this includes birth registration, identity documentation, immigration status, citizenship — this is their job,” said Chauke.

She said when people approach Home Affairs offices, they are not requesting a favour, they are exercising their right. “And we are entitled to services that are not only efficient but transparent,” said Chauke.

She said people also spend a lot of time in Home Affairs queues, going back and forth between offices and spending money on travelling and making photocopies.

Problems for children getting their IDs were raised in a recent Portfolio Committee meeting in March where the DHA was asked to address some of these concerns.

Concerns raised included: that foster parents sometimes have to wait up to three years for a birth certificate to be issued, that a child needs to be registered within a 30-day period (this is difficult for those living in rural areas) otherwise an expensive DNA test is required, and that there are long queues and network outages at Home Affairs offices.

Thomas Sigama, Deputy Director General at Home Affairs, told Parliament then that incomplete documents from adoptive parents or verification of documents often cause delays in situations where children are living with foster parents. He also noted that capacity issues and bad queue management were causing delays at many Home Affairs offices. He urged parents to register their children within 30 days of birth.

GroundUp tried for over a month to get a response from Home Affairs spokesperson Siya Qoza. Qoza said that the department was working on the queries but did not respond to any follow-ups after this. DM