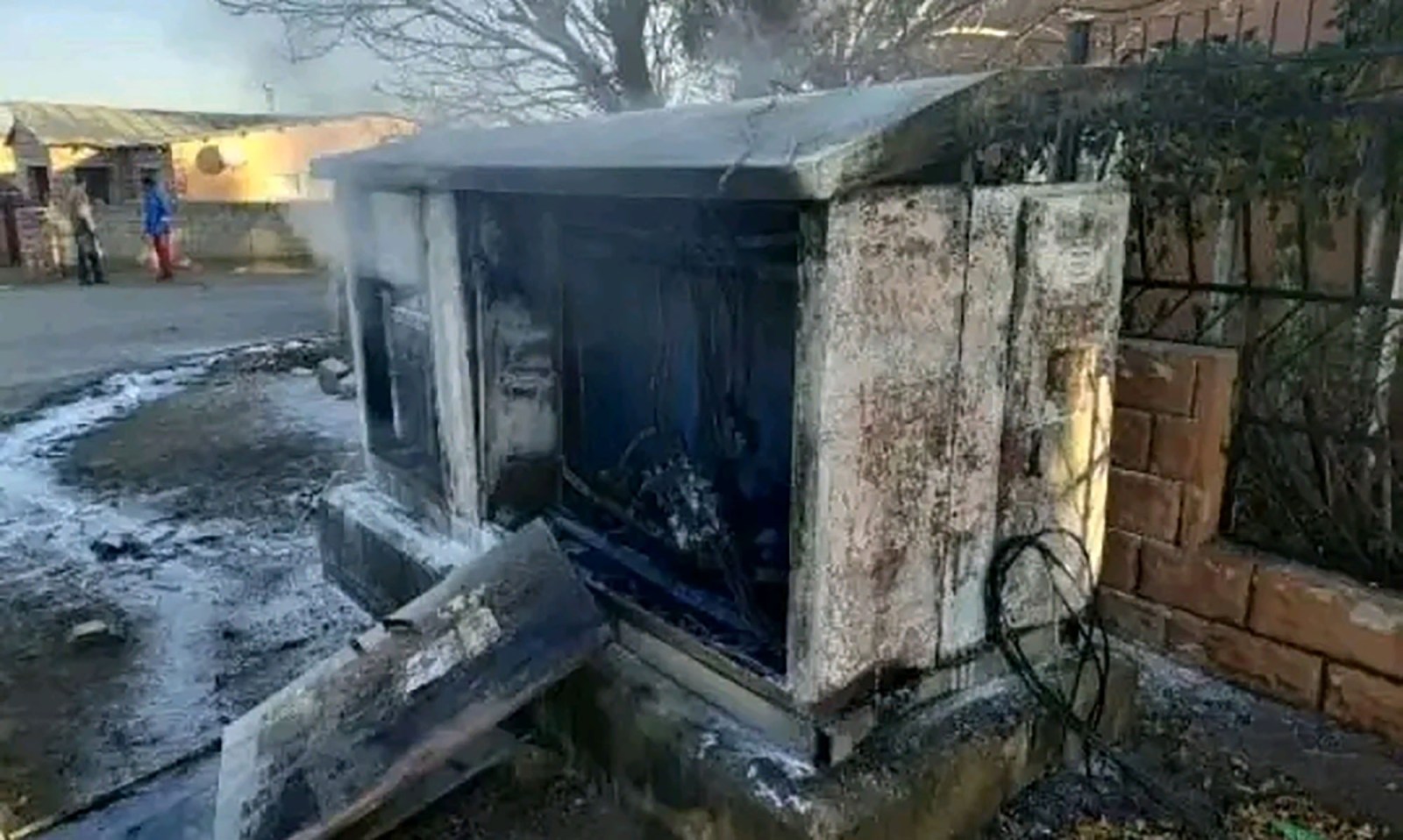 Residents of White City in Mlungisi were left without electricity on Friday, 13 May after a substation caught fire. (Photo: Supplied)

Enoch Mgijima municipality suspects criminals were behind the burning of two substations that caused electricity outages in Komani.

Three municipal buildings have been damaged in fires, including a section of the treasury building. And two substations have burnt down in Komani. The cause of the fires is still being investigated.

Since 1 April, parts of Komani, including the central business district, have been hit by power outages.

Finance Minister Enoch Godongwana, speaking at a special council meeting on Friday, said he would raise the matter of the fires with Police Minister Bheki Cele in an upcoming meeting.

Enoch Mgijima council speaker Noluthando Nqabisa said the municipality suspected foul play was behind the burning of substations and the outages in Komani.

“There is a need to investigate what is causing the electricity problems in Komani. We have a service provider maintaining our electricity infrastructure, but the problems are still going on,” she said.

Chief whip Nombuyiselo Ndlebe said there was a problem in Mlungisi, and that the workers who attended to an issue there before the transformer burnt should be fired.

“The workers who stole a transformer in the municipality must be fired… All those that don’t do their job must be fired,” she said.

Municipal manager Nokuthula Zondani said the crippled substation was one of four main substations that feed the western side of Komani.

“It has two transformers: a 15 Megavolt-Amperes (MVA) which was struck by lightning and damaged in September 2019, and a 20MVA which was operating and caught fire on 6 May 2022.

“The 20MVA transformer was bought from East London Industrial Development Zone at a cost of R7-million, which was going to be paid [on] terms,” she said.

Zondani said that on 6 May there was load shedding from 5am to 7am, but when power was restored, there was an explosion at the transformer that caused a fire.

“The fire damaged the 20MVA transformer and cables… The person who reported the explosion was from Red Guard security who was on site. The fire was extinguished and the extent of damage was investigated,” she said.

According to Zondani, a crisis committee of senior and middle managers was set up to look into the fires.

“A service provider was appointed to test the cables and connect the town using alternative areas of supply. The company that was assessing the magnitude of the damages at the western substation checked the availability of material that will be needed to restore power, and indicated that the material is available at a cost of around R25-million,” she said.

“The allocation of funds to purchase a new 20MVA transformer is critical. The building of a new 11kV (kilovolt) overhead line connecting the western substation and Madeira substation is also needed,” she said.

The council approved a payment plan with the service provider on Friday since the municipality does not have sufficient budget to pay for services rendered.

It also recommended that the Development Bank of South Africa be engaged by the municipal manager to help the council with refurbishing dilapidated electricity infrastructure.

Municipal spokesperson Lonwabo Kowa said “electricity is now distributed from three sources instead of the normal four substations in Komani. This has led to a situation where the power system currently operates under severe strain, especially during working hours when businesses are in full operation.”

Kowa urged residents to use electricity sparingly to avoid a system overload which would cause intermittent outages. DM