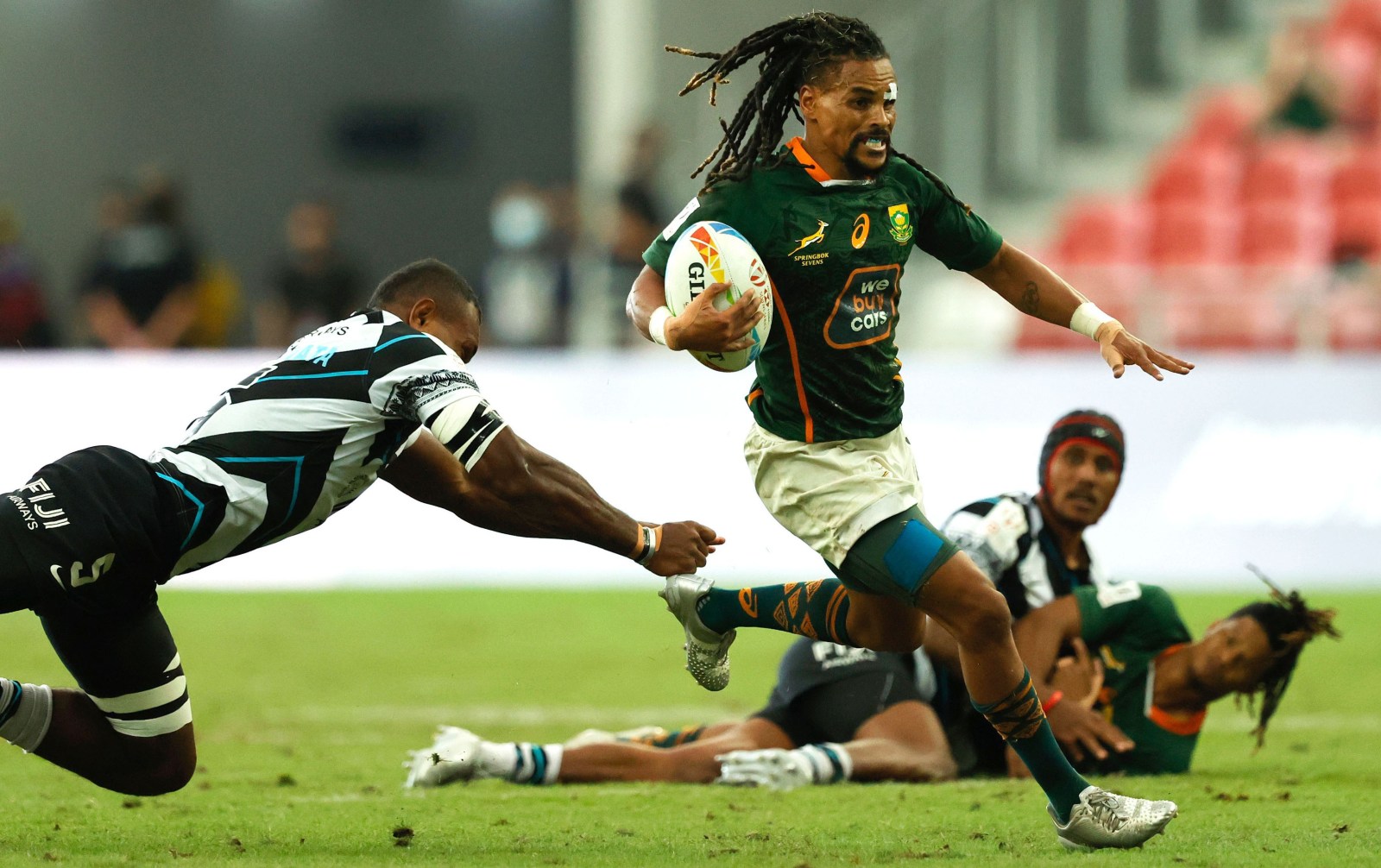 The Blitzboks and Imbokodo are back on the road this week with the next leg of the World Sevens Series in Toulouse.

The Blitzbok team are perennial winners. They have won three of the past five World Series titles and recently went on a 36-match winning streak – the second-longest in sevens history.

Their winning streak was surprisingly snapped by the USA in Singapore in April where they capitulated to finish sixth in the tournament, after winning the four prior tournaments in dominant fashion. A week later in Vancouver, the Bok Sevens team failed again, dropping out at the quarterfinal stage in a loss to Samoa.

In the overall standings, the Blitzboks (111) still lead the chasing pack of Argentina (105) and Australia (100) through their early-season dominance, but they will need to be more clinical and disciplined in the final three legs if they want to secure their fourth title in six years and stamp their authority as front-runners in the sevens game.

“We’re actually excited to get back onto the playing field. I think we had good discussions after these two tournaments (Singapore and Vancouver) and what came out of it is that we are a much better team than what we showed over the last two tournaments,” said head coach Neil Powell.

The Blitzboks had a month off to try to understand and rectify their mistakes from those tournaments and now head to the Toulouse leg of the sevens circuit, which kicks off on 20 May, followed by the London leg on the following weekend.

“It was important for us not just to look on-field and to fix things on-field, but there were one or two things that we needed to recommit to off-field in terms of our culture and where we want to go,” Powell said.

“We actually had good accountability conversations about our system and how everybody is responsible for the system, and also a good review on what we need to change or do better on-field in order to be successful in Toulouse.

Despite their recent setbacks, through their recent mindset shifts and honest conversations the Blitzboks are confident heading to Toulouse.

“The biggest thing is the mindset of the players, that’s just the approach of this coming tournament, just to be in a mind space that meets our standards. That for us is pretty much the solution and that’s been the focus. It contributed really well to the preparation for these upcoming two tournaments. There’s a lot of confidence that we can get from that,” Blitzbok skipper Shakes Soyizwapi told Daily Maverick.

Return of the ace

The Springbok Sevens’ most experienced player yet, Branco du Preez, returns to the squad heading to Toulouse and London after recovering from a shoulder injury.

“Branco [du Preez] adds so much experience to this squad, he is the most experienced South African sevens player of all time, so really brings so much calmness and experience,” Soyizwapi said.

“Especially in the pivotal position he plays. He guides the less-experienced players, which is amazing because those guys are the role-players of the team and the playmakers as well. Really enjoy being around him as well, a great individual and just an amazing rugby player.”

The experience Du Preez provides was evidently missing in the past two tournaments as the Blitzboks’s discipline suffered in heated moments of crucial games.

“We could have definitely been calmer in the past two tournaments and there were situations that required that and that’s why I’m so excited to have him (Du Preez) back,” said the skipper.

“For any team to get an experienced player back like Branco du Preez will be a massive boost and I think not just in terms of what he brings to you on the field, but also that calmness and experience that he gives to the players around him,” said the coach.

“Branco embodies what Springbok Sevens is about. He’s always putting the system above his own ambitions and he always gives whatever he can for the system, whether he’s starting and playing 14 minutes or he’s sitting on the bench and not playing a single minute. I think he’s one of the players in the team that everybody can look up to and say, ‘listen, this is really a guy that can truly say he puts Springbok Sevens above his own ambitions’.”

The 32-year-old Du Preez himself, preparing to play in his 80th tournament, remains grateful to have another opportunity to wear the green and gold of the Blitzboks once more.

“Personally I’m really excited to get another opportunity, there’s not a lot of guys that get this opportunity. We really work hard for a spot in the team, but I’m really blessed and grateful for this opportunity. Very excited. I think we’re gonna have a good run. We just base ourselves on the effort that we give on the field and I just want to give my 100% all the time,” he told Daily Maverick.

The South African Women’s Sevens team, affectionately known as the Imbokodo, will join the Blitzboks in Toulouse for the last leg of the 2022 women’s series, as an invitational team.

The experienced Sizophila Solontsi will lead the squad at the tournament to be played at Stade Ernest-Wallon from 20 to 22 May.

“Very excited to go, it’s going to be something different. The African Cup was nice to play, we haven’t played an international tournament since December 2019. Obviously, the level’s lower than a World Series tournament,” Imbokodo head coach Paul Delport told Daily Maverick.

They were in a tough pool but would use the opportunity to learn and grow from the rare experience.

“I think what’s going to be challenging and exciting for us – in the same breath – is that three of the top five teams in the world are in our pool. We start against the team that have already won the World Series, in Australia.

“Then two big challenges in the USA that have won a tournament this year, then Fiji that won the bronze medal at the Olympics last year. It’s going to be a different challenge for us but also just a fact-finding mission to see how well we’ll do against the best teams in the world.”

Australia have dominated the World Series, having won four of the five tournaments to date and claimed runners-up medals in one. Facing them first in Toulouse is a mighty challenge for Delport’s squad.

“I think for us, the one thing that we’re going to shift focus to is implementation, that’s what we struggled with a lot at the African Cup,” he said.

“It wasn’t due to the lack of trying, it was our lack of game time. I’m hoping that having played two or three weeks ago, we can keep that momentum built in that tournament and go into this one.