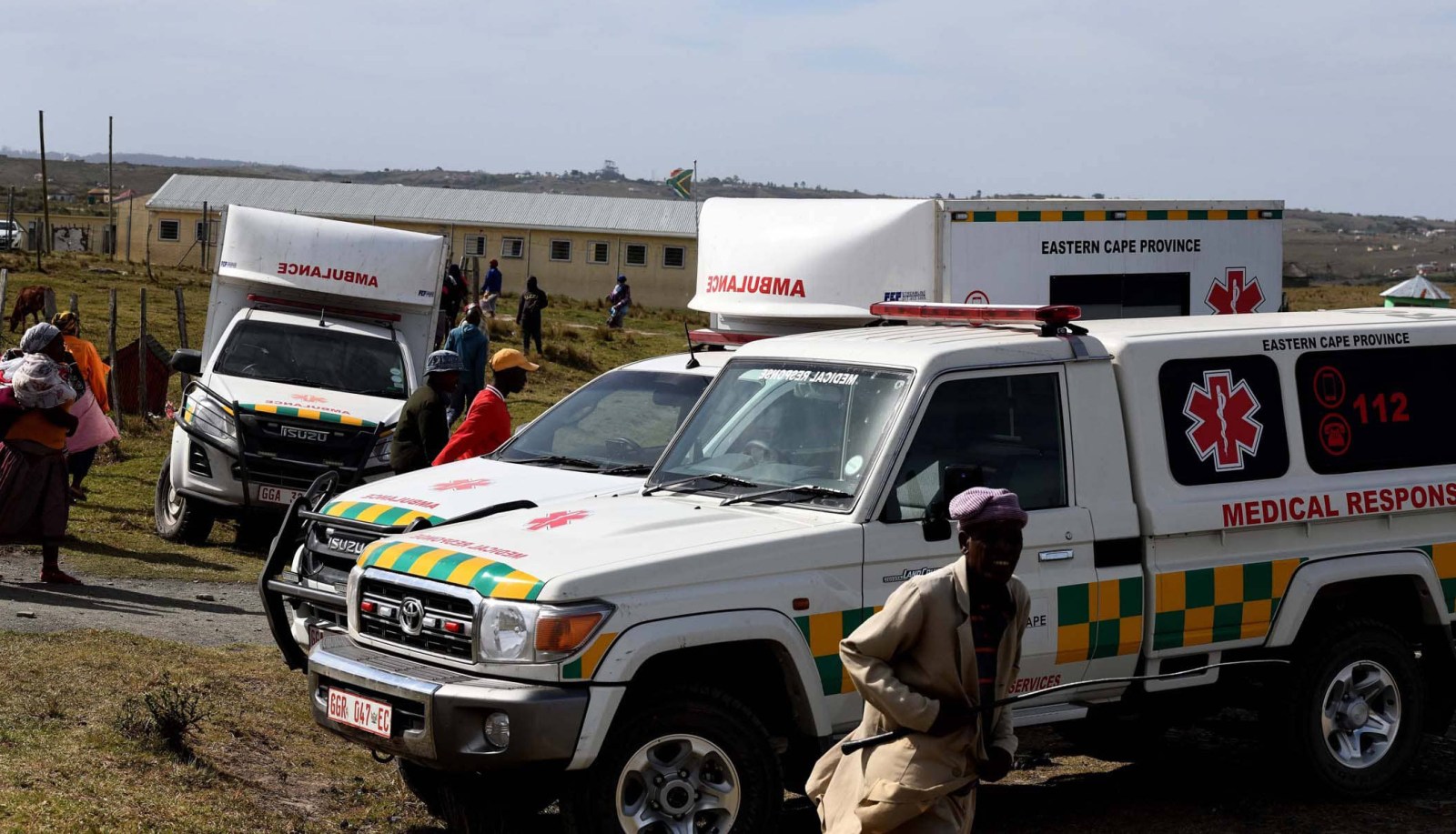 An ongoing strike by emergency services personnel in the Amathole and Qonce areas is putting strain on rural healthcare users needing emergency care. Some healthcare workers say the situation is dire with emergency cases piling up.

The Eastern Cape Department of Health was left with no choice but to rope in private ambulances as Emergency Medical Services (EMS) workers in the Amathole and Qonce areas have been striking since 12 April. According to the department, the private ambulances cost R1.2-million for this period. The situation escalated after some private ambulance vehicles were allegedly stoned and some paramedics who refused to join the stay-away were attacked.

Some health workers say the situation is dire and emergency cases are piling up. Doctors warned that this puts patients at real risk of harm and even death. Critically ill patients, including complicated pregnancy cases, often have to be ferried by private vehicles to Cecilia Makiwane Hospital in Mdantsane and Frere Hospital in East London.

One frustrated healthcare worker who asked to remain anonymous slammed the EMS workers for refusing to take call-outs.

“This EMS strike is crippling access to ambulances and patient transport vehicles and putting other healthcare workers under pressure,” the healthcare worker says. “We are unable to transfer patients to Cecilia Makiwane or Frere Hospital in need of urgent medical care since 13 April. We have no choice but to use non-emergency vehicles to transfer patients according to the order of importance.

“Emergency cases are piling up by the minute, as we normally transfer ten emergencies on a normal day. We have been requesting a private ambulance to assist with transfers and to alleviate the pressure caused by the lack of personnel. However, striking workers are not allowing private ambulances to operate and it was allegedly pelted with stones. They also tried to drive the ambulance off the road when responding to emergency situations.

“There was a pregnant lady that should have been referred to Cecilia Makiwane Hospital, but there was no EMS. She had a Caesarean section in Fort Beaufort Hospital, luckily the mom and the baby were fine. There are many cases of children on oxygen needing referral to Cecilia Makiwane Hospital. Now we have to wait for the police to escort private ambulances. If there is no police vehicle available, we are unable to refer patients.”

The healthcare worker warns that such delays can be fatal.

“In some cases, we risk people’s lives and transport them in a non-emergency vehicle instead of waiting for an ambulance that might not arrive. The delay of call-out or non-availability of an ambulance can lead to death or a patient might be exposed to a worse condition.

“Some patients are forced to hire taxis at prices they cannot afford to take them to the hospital or forfeit their hospital visit, which may have dire long-term consequences to their health. This is happening at a time when the province has high medico-legal litigation from medical negligence,” she says, adding that this makes it easier for patients to blame hospitals when things go wrong.

The unprotected strike is affecting EMS services mainly in the rural areas of the Amathole District where desperate villagers now have to pool their resources to hire private cars to get to healthcare facilities.

Poor access to EMS is a longstanding problem in many rural areas in the Eastern Cape. The situation triggered the South African Human Rights Commission (SAHRC) in 2015 to investigate and produce a report with detailed recommendations.

But, in her recent budget speech, Health MEC Nomakhosazana Meth acknowledged that the Eastern Cape Department of Health has not yet addressed the gaps identified by the SAHRC.

Meth says the department should have at least 650 ambulances, but currently, it has 447, of which 181 are patient transport vehicles, and 41 are rescue vehicles. She said this falls short of the recommended one ambulance per 10,000 population. The department had 2,244 EMS staff against a population of about 6.5 million, as there is a shortage of intermediate life-support personnel.

The National Education Health and Allied Workers’ Union’s (Nehawu) provincial secretary Mlungiseleli Ncapayi denied that EMS workers are on strike. Instead, he accused the department of refusing to accommodate workers’ demands.

“We know nothing about a strike in Amathole and King Williams Town. What we know is that it is business as usual. It is just that paramedics are not answering their private cell phones for the call-out. This is due to the fact that the EMS personnel have been using their private cell phones since 2017 for call-outs and the department refuses to provide them with the necessary communication tools,” he says.

“The fleets (ambulances),” Ncapayi says, “are not roadworthy [and] others had expired license discs. People vilify medics for arriving late, not knowing the struggle and challenges they have with their fleets. The organogram is another problem as there are medics who work as shift supervisors who are not on the organogram [so] the department is not paying them. They are also overlooked for promotion because they don’t have degrees. We want the department to capacitate these workers who don’t have entry requirements to be admitted to university for them to stand a chance for promotion.”

Ncapayi says EMS workers have been frustrated since the outbreak of Covid-19.

“EMS workers are not given enough support and when they voice their frustration, they are threatened with dismissal. Workers are going to fight and we are mobilising them to say let’s go and fight. We understand that the department is bankrupt but there is no way that they have money for tenders but they don’t have money to pay workers and fill vacancies,” says Ncapayi.

“The department has noted, with grave concern, a wildcat protest action by some EMS staff in the Amathole District and King Williams Town. The strike is unprotected, and the department is taking appropriate action in line with the prescripts of the Labour Relations Act. This includes, and is not limited to, implementing the no-work, no-pay principle, and reporting unethical behaviour to relevant bodies like the Health Professions Council of South Africa (HPCSA).”

He says EMS employees provide an essential service, guided by their code of conduct and prescripts from the HPCSA.

“Refusal to respond to an emergency puts the lives of the poor and vulnerable at greater risk and cannot be accepted as a means to raise concerns by staff. Management is committed to finding a solution to issues affecting staff members,” he says.

Kupelo appealed to those involved to reconsider their actions. “We have instructed the EMS workers involved to return to their workstations and focus on what they swore to do to save lives and allow the engagement process to unfold.” He reminded EMS workers that there are no circumstances in which an emergency practitioner can refuse to attend to patients.

“We dismiss [claims] that our vehicles are not licensed. Our vehicles are licensed and those that are subjected to roadworthiness have been subjected to that. There is a new push-to-talk system that the department is introducing. The system is more durable than a cell phone; it is more appropriate for emergencies, and it is able to see the crew on duty.”

Kupelo says it is only in Amathole and Qonce that EMS workers are refusing this system and are demanding to be allocated cell phones instead.

He also responded to claims of some supervisors performing work they are not paid for.

“We acknowledge that people were made to act without compensation, which will be corrected and we have committed to filling all funded vacant posts within the Annual Recruitment Plan for this financial year. We urge all workers to allow due processes to unfold so that we will continue delivering quality services to the majority of the people in the Eastern Cape. Where there is no money, some positions will be filled in the next financial year.”

Ncapayi says Nehawu is surprised and disappointed to hear that there were ambulances that were pelted with stones.

“Nehawu does not condone any criminal activities as we value people’s lives we mean to protect. We are calling on the department to investigate and report this allegation to law enforcement agencies because as the union, we are distancing ourselves from this action and if our members are involved, we will take the necessary steps,” says Ncapayi.

By the date of publication, the strike was still ongoing in areas, including Raymond Mahlaba, Amahlati, and Qonce. “We are still dealing with the matter,” Kupelo says. “We’ve issued intention to dismiss and got a court interdict, which they’ve disobeyed.”

The department is set to have a workshop with EMS stakeholders to discuss issues on 19 May. DM/MC