BUCS ON THE BRINK 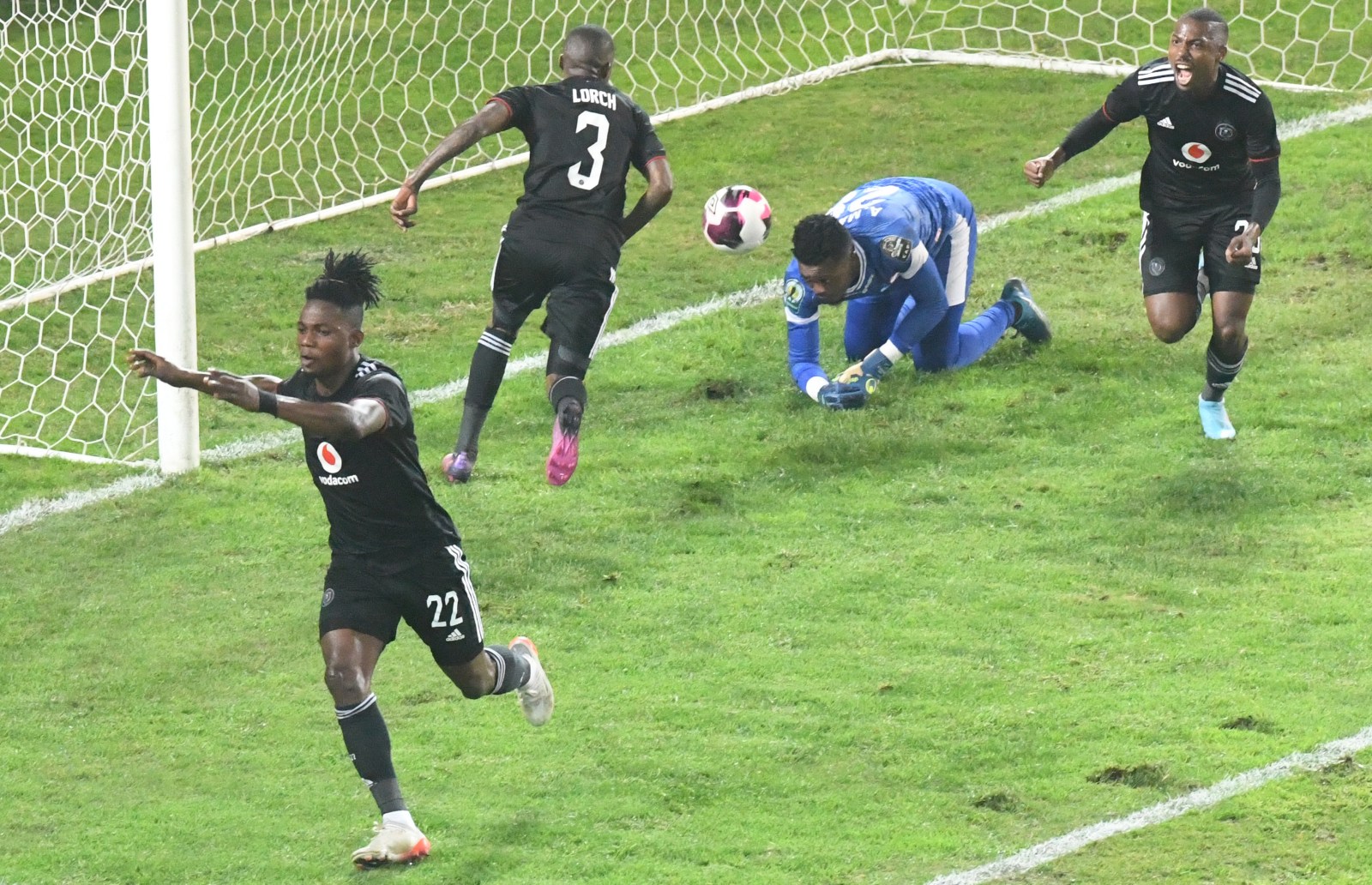 Kwane Peprah of Orlando Pirates scores a goal and celebrate with teammates during the CAF Confederation Cup match between Orlando Pirates and Simba SC at Orlando Stadium on April 24, 2022 in Johannesburg, South Africa. Pirates will face Libya’s Al Ahli Tripoli in the second leg of their semifinal. (Photo by Sydney Seshibedi/Gallo Images)

The Buccaneers can reach their first continental competition final since 2015. First, they must navigate past Libya’s Al Ahli Tripoli.

Orlando Pirates are on the cusp of reaching the Caf Confederation Cup final. They need to merely avoid defeat against Libya’s Al Ahli Tripoli in the second leg of their semifinal to progress to the final showpiece, which is to be played in Uyo, Nigeria on 20 May, 2022.

In the first leg, played in Benghazi, the Buccaneers managed to secure a two-goal cushion thanks to strikes by Innocent Maela and Goodman Mosele. The goals handed Pirates a vital 2-0 win away over Al Ahli.

However, the co-coaches of the Soweto giants — Mandla Ncikazi and Fadlu Davids — are fully cognisant of the fact that the tie is still very much alive, with it essentially being halftime in the contest. The former, speaking after their crucial success in Libya said:

“The game is not over; this is just halftime. We are only leading because they can go to South Africa and do the same to us. We will treat the game very seriously because we understand the dynamics of African football, an away goal is very important.”

“We will afford them the respect they deserve in the second leg but not to the extent that it alters the way we play and how much we want to impose ourselves on the game. We’ll just prepare for a good team,” Ncikazi added.

Since their lone Caf Champions League title in 1995, the Sea Robbers have struggled to show the tip of their nose in continental interclub competitions. They did reach the final of the Confederation Cup in 2015, but were beaten by Tunisian side Etoile du Sahel. Two years before, they fell to Egypt’s Al Ahly in the Champions League final.

This season, the Buccaneers have found solace in the Confederation Cup, this in the face of another underwhelming domestic campaign. They find themselves languishing in sixth on the DStv Premiership log; a mammoth 22 points behind champions Mamelodi Sundowns.

In the Nedbank Cup, they were eliminated in the round of 16 by finalists and defending champions Marumo Gallants.

Their fortunes in the continental competition have been vastly different. Pirates finished at the summit of their group, with four wins, a loss and a draw from their six games.

They also ended the round-robin phase as the top goal scorers, with 15 strikes to their name — the only team, other than RS Berkane of Morocco, to reach a double-digit goal tally during the group campaign.

Berkane are in action against Democratic Republic of Congo’s TP Mazembe in the second Confederation Cup semifinal. The latter leads 1-0 heading into the second leg. Both semifinals are to be played on Sunday, 15 May. Kick-off for Pirates and Ahl Ahli is 6pm, while in Morocco they will start at 10pm.

Meanwhile, the custodian of African football — the Confederation for African Football (Caf) — has responded to allegations of irregularities in its handing of the hosting rights for the Caf Champions League to Morocco, for the second year running.

Egyptian club Al Ahly are all but assured of a place in the final of the most prized possession in African club football — this after an emphatic 4-0 win over ES Setif in their last four clash.

The other club that is a shoo-in for a place in the final is Morocco’s Wydad Casablanca. They beat Angola’s Petro Luanda 3-1 in the first leg.

So, when Caf announced that the 2022 final would be played in Morocco, the Egyptians were far from pleased, hinting that the mother body of African football might be biased. However, the organisation has responded.

“Morocco and Senegal were the only countries that fulfilled the host country bid criteria, after Caf requested its 54 member associations to submit bids to host the TotalEnergies CAF Champions League one-leg final. Egypt did not submit a bid,” said Caf in a statement.