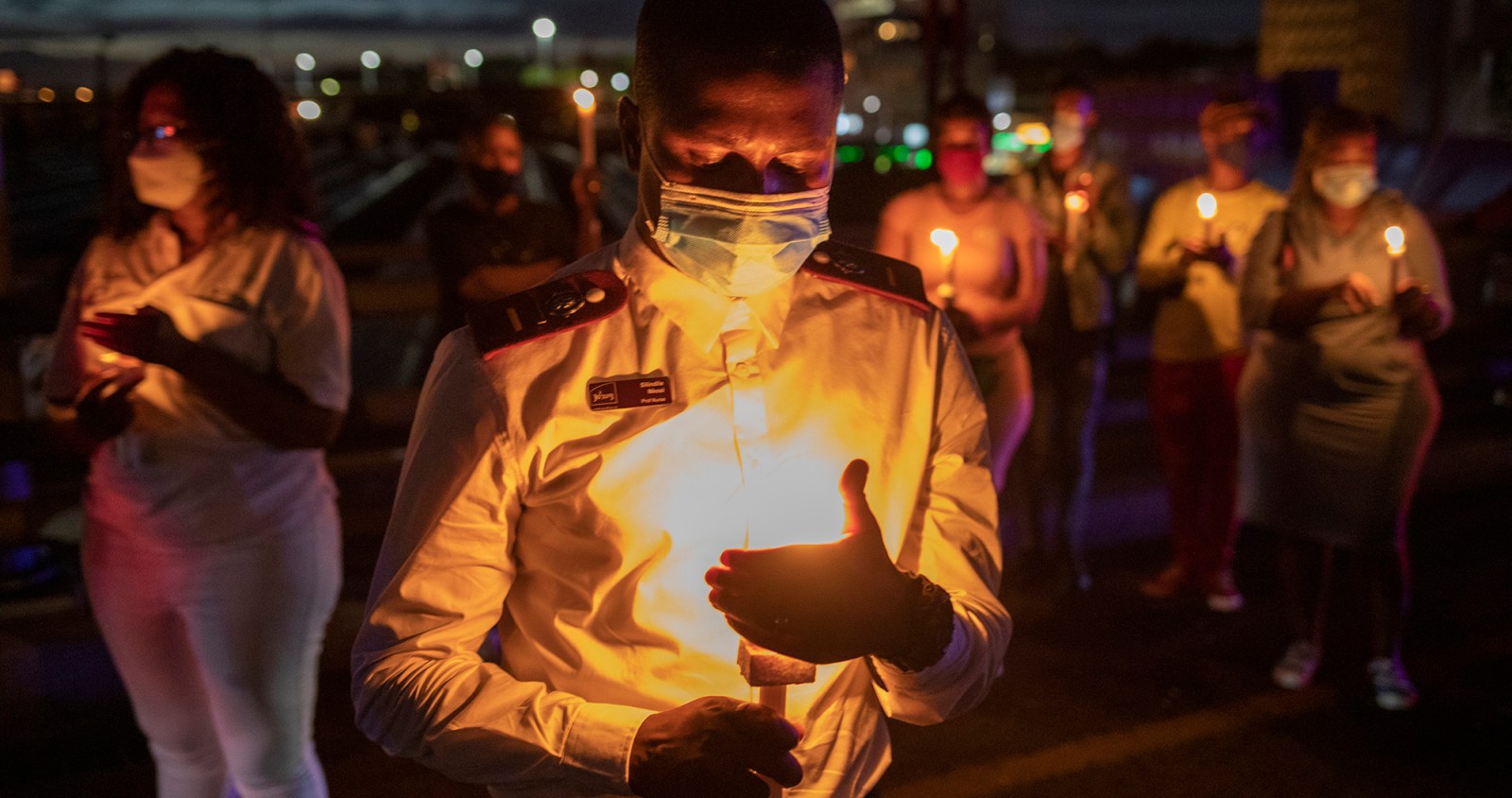 People with candles at a 2020 New Year’s Eve memorial in Johannesburg for victims of Covid-19. (Photo: EPA-EFE / Kim Ludbrook)

Covid began to hit South Africa badly in May 2020. Now, we are very likely beyond the worst, with fewer people dying. But Covid remains very infectious and still rather deadly.

The Medical Research Council (MRC) has diligently tracked the excess deaths in South Africa that have come in the wake of the pandemic. It was two years ago this month that the number of deaths in the country started exceeding what was expected, based on historical numbers.

As of 7 May, 310,000 more people have died than expected over the past two years. Conservatively, 85% of these deaths are estimated to be directly caused by SARS-CoV-2.

This means that more than 260,000 people in this country have died of Covid.

For the past six months or so, despite the rapid spread of the Omicron variant, the excess death rate has dropped a lot. Although Omicron and its sub-variants are more infectious than any previous variant, a combination of vaccination – more than 21 million people have been vaccinated at least once — the high rate of previous infection (most people who are most susceptible to serious Covid disease have already died), and changes to the virus itself have all contributed to making the disease less deadly.

The drop in lethality is good news. Also, there are new medicines like Paxlovid (which contains the drugs nirmatrelvir and ritonavir), that are promising treatments for Covid. But they are expensive. The US government pays more than R7,500 for a five-day course of Paxlovid, for example. Also, these treatments are not available in South Africa.

The South African Health Products Regulatory Authority should get moving by approving these drugs as well as rapid tests for home use, and pharmaceutical companies should drop their prices and allow generic manufacture of these medicines.

There are important caveats to the good news, though. Barring some technological breakthrough, Covid is with us for the long run. It’ll continue mutating and continue infecting us. Epidemiologists use the word “endemic” to describe this.

Many of us have had Covid at least once, and most of us will get it several times in the course of our lives. As we get older, we may become more likely to die of Covid. Repeated vaccinations will almost certainly be necessary to reduce the risk of infection, hospitalisation and death.

The life expectancy estimates used to construct the graph above are from the Thembisa model.

From the start of the pandemic, influenza has been a useful disease to compare with Covid. That’s because nearly all of us have had the flu, usually a few times by adulthood. We know what it feels like to be sick with flu and we have a good idea of how many people die of flu every year.

Flu kills about 6,000 to 11,000 people in South Africa a year (though this dropped dramatically during Covid). So in a typical two-year period, we’d expect about 20,000 people to die of the flu. This means Covid has been more than 10 times as deadly. In fact, Covid has — unequivocally and by a long way — killed more people in the past two years than any other disease, not just in South Africa, but worldwide.

But now that Covid, like flu, is also endemic and not as deadly as it once was, where do we stand? We are only in May and there have been nearly 23,000 excess deaths this year; certainly most of those have been Covid.

Covid is still far deadlier than flu. It remains one of the three deadliest epidemics in the country, along with HIV and TB.

Over the long run, SARS-CoV-2 will probably become like the other four coronaviruses that give us a two or three-day common cold which is easy to manage and rarely fatal. But with our current knowledge, anyone who predicts how many years this will take is just guessing.

In the meantime, it’s even possible that variants will arise that cause a serious spike in the death rate.

There’s another serious way in which SARS-CoV-2 currently differs from the flu virus. It is mutating and spreading extraordinarily quickly.

The percentage of the population that contracts flu varies quite a bit from year to year, and the illness is concentrated in winter. But 10% is a reasonable average estimate.

Covid variants appear to be coming along at a much faster rate than flu variants, and a lot more than 10% of the population is being infected annually. Also, there isn’t yet convincing evidence that Covid has much of a seasonal preference — our fifth wave started in April and our previous one was in summer.

In other words, Covid also results in a lot more illness and, consequently, sick leave, than flu. Nevertheless, the Covid death rate is at a point where, in our view, we have to live with it.

Vaccination, good ventilation — keep the windows open in your workplace, carpool, bus, train, taxi — and prudent behaviour, such as staying at home when you’re symptomatic, are advisable.

There’s some debate to be had on how much longer mask-wearing can be kept up, but beyond this, nothing much more can be done by the public.

We are very likely beyond the worst, but Covid remains very infectious and still rather deadly. DM/MC