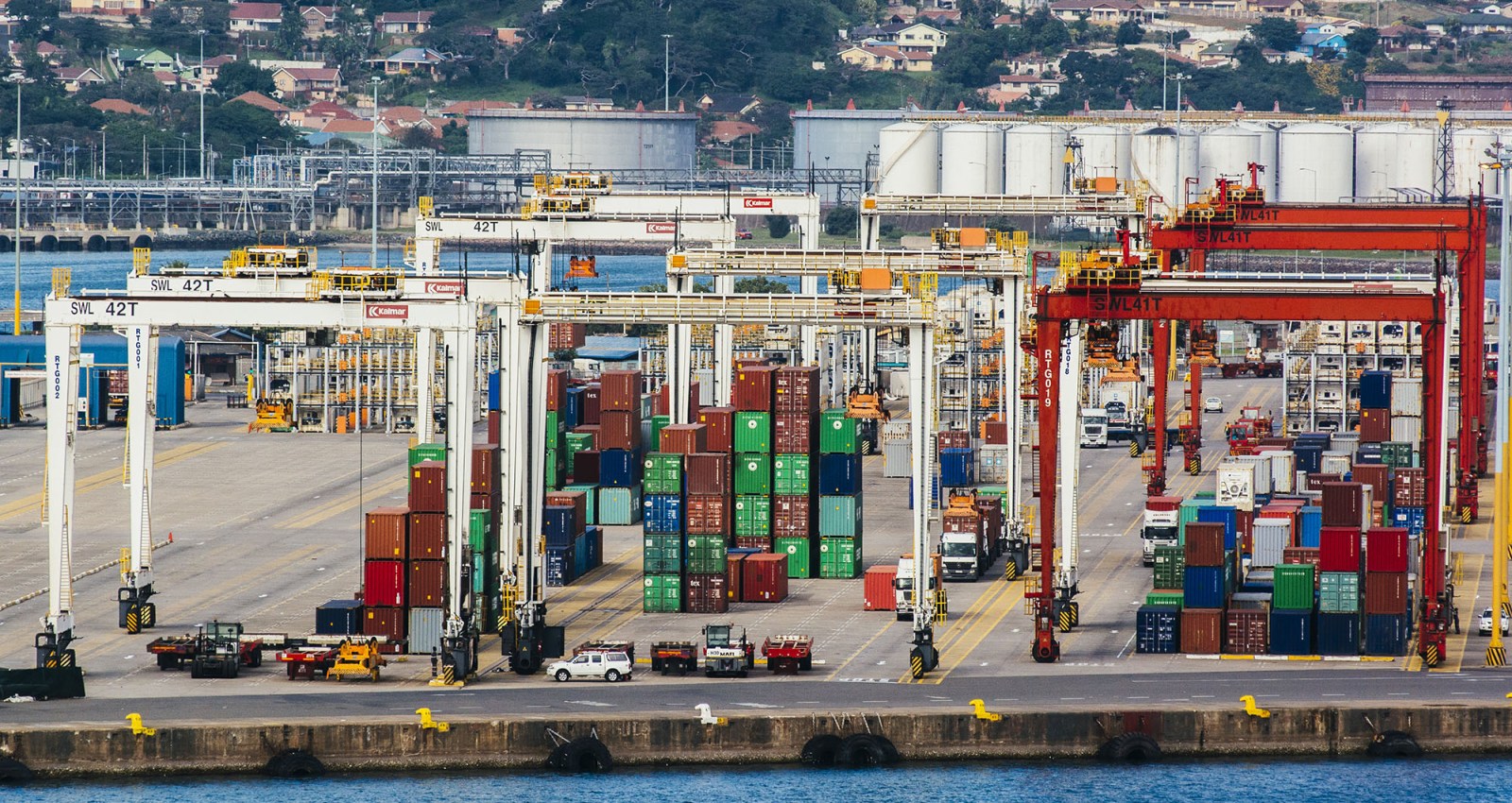 Mobile container handling gantry cranes stand on the dockside at the Port of Durban, operated by Transnet's Ports Authority, in Durban, South Africa, on 25 May 2018. (Photo: Waldo Swiegers / Bloomberg via Getty Images)

South Africa’s external trade situation is among the strongest in the emerging market universe, with its positive export positioning ahead of any of the other emerging markets. Commodities will determine whether and for how long this continues. But as long as commodity prices remain elevated, the country’s low external risk status stands in our favour.

South Africa is stacking up well against its other emerging market counterparts in the trade stakes, and although the world may sometimes feel there’s far more bad news than good right now, latest research paints “a relatively benign picture” for emerging market trade balances this year.

The Institute of International Finance (IIF) this week published an analysis that quantifies emerging market trade balances to assess their external risk and finds that in most cases trade balances are better, or similar to, early 2019 before the pandemic struck.

In all, the IIF ascribes higher imports than before Covid-19 to the economic recovery and high global inflation, but fortunately strong exports are, in the main, outpacing imports.

South Africa leads the pack in exports as it has achieved on an annualised basis compared with its pre-Covid annual period and has the second largest trade balance in the emerging market universe, topped only by Peru.

Of course, South Africa’s trade balance has been predominantly lifted on a rising tide of commodity prices and, with commodities contributing more than 70% to total exports, its trade fortunes will inevitably rely on how its top commodity exports fare during the year ahead. These include coal – which will continue to benefit as long as the global energy complex remains under strain – iron ore, platinum and gold.

In April, Investec chief economist Annabel Bishop said the performance of commodity prices over the past month had been varied. Energy prices have continued their upward march, metals are mostly lower and food prices mixed, but all are higher year on year.

Thus the country stands to benefit from higher prices on palladium, rhodium, iron, coal and food exports – and a moderation in oil prices will also favour South Africa’s trade balance in the second quarter.

The effect of higher commodity prices could be even more prolonged because, as the World Bank points out, “global patterns of trade, production and consumption of commodities (have shifted) in ways that might keep prices high for years”.

“Many countries are turning away from Russia as a coal and oil supplier and have been finding alternatives in more distant locations.”

In McKinsey’s latest report, War in Ukraine: Twelve disruptions changing the world, one of which it defines as: The race for critical materials, equipment and commodities intensifies. They say although prices of some materials seem to have stabilised recently, more change may be in store. In time, the consultant believes that an equilibrium is likely, “though at potentially higher prices than today”.

Rising or still high commodity prices could further widen South Africa’s lead against Turkey, India and Colombia which, according to the IIF’s research, have “more meaningful” external imbalances, as reflected in their trade flows. It assesses external risk as highest for Turkey and lowest for India.

In Turkey, government’s devaluation of the lira hasn’t had the desired effect because imports have continued to outpace export volumes. The IIF notes that government policies are too expansionary to correct the country’s external imbalances and that its trade outlook is “highly unstable”.

Meanwhile, India is expected to have a current account deficit of more than 3% of GDP as a result of a trade deficit in the first four months of the year that is the widest since 2013. But the IIF says the outlook is not alarming “but likely means continued depreciation pressure on the rupee”.

“We think global growth will suffer heavily from war in Ukraine and China’s slowdown, which is not good for commodity prices and EM exports. However, weak growth will also weigh on imports. On balance, we think current account deficits will be manageable even if growth and commodity prices soften significantly.”

Longer term, the outlook for trade is far more complex.

Bishop reminds us that the WTO has warned of the longer term impacts of fragmented “trade blocs based on geopolitics”, reorientation of supply chains (onshoring), “reduc(ing) global GDP in the long run by about 5”(%)”, as “restricting competition and stifling innovation” harm globalisation.

External balances are a critical determinant of capital and portfolio flows into a country and, fortunately, on this measure South Africa is looking far more stable than its BRICS partners.

Not only has it run a meaningfully positive trade surplus since the first quarter of 2020 and current account deficit that steadily declined from 2013 to 2020 when it moved into surplus, but it has achieved these improvements notwithstanding its internal economic challenges and the historic disruption wrought by the pandemic.

Thus, when investors turn their backs on emerging markets during the inevitable bouts of risk-off sentiment that lie ahead as long as macro-economic and geopolitical uncertainty prevails, hopefully South Africa’s stand-out trade performance will work in its favour. BM/DM