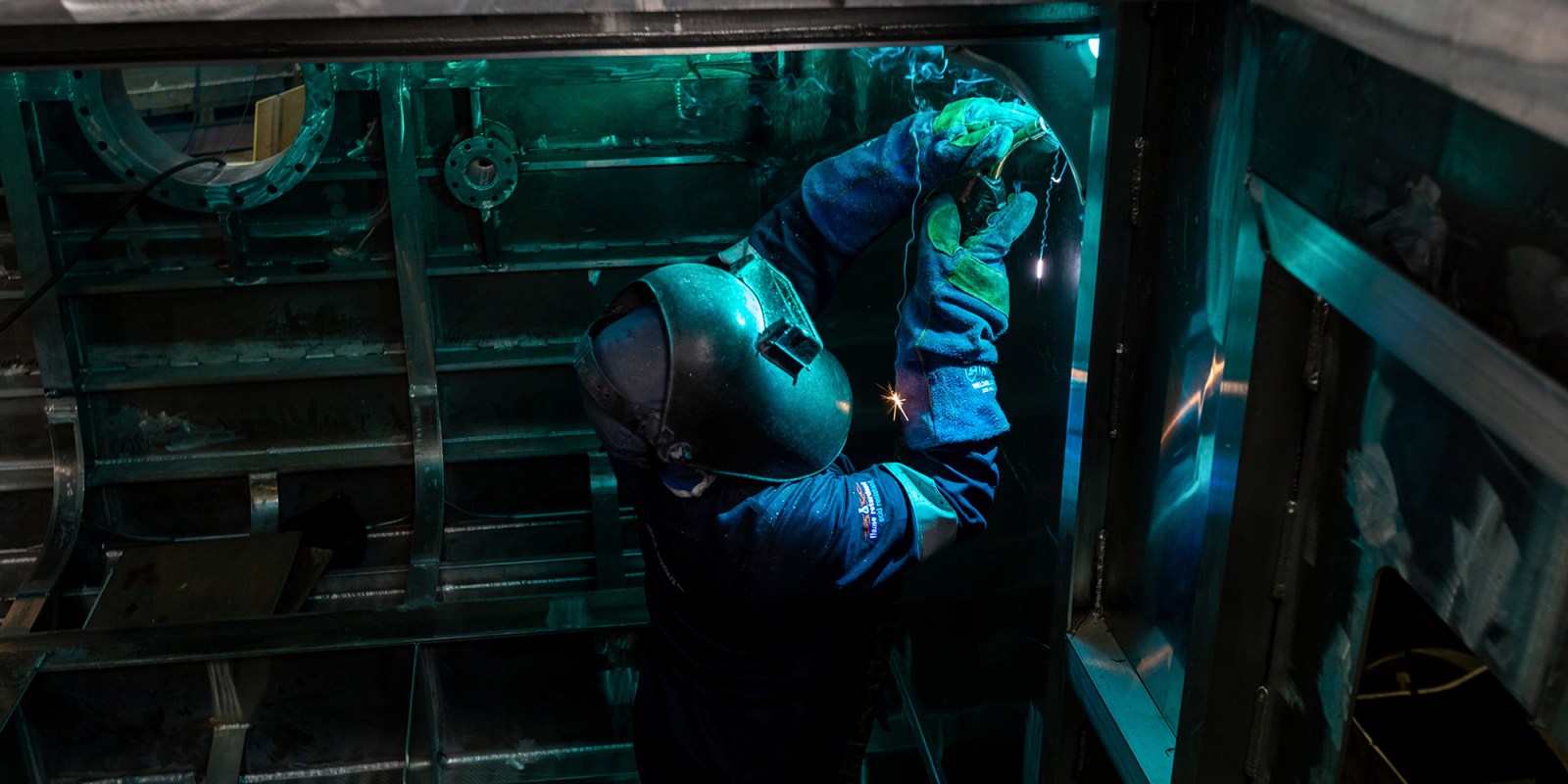 A worker welds the frame of a boat in the Paramount Maritime Holdings shipyard in Cape Town, South Africa, on 1 July 2021. (Photo: Dwayne Senior / Bloomberg via Getty Images)

South African mining and manufacturing production data for March suggest the economy got off to a faltering start in the first quarter of 2022.

South African mining production slid 9.3% on a year-on-year basis in March, according to data released on Thursday, underscoring the many headwinds faced by this key sector which threw Treasury a lifeline last year. This followed a 5.8% annual decline in February.

It all adds up to a seasonally adjusted 1.5% contraction over the three months to the end of March compared with the previous three months, which bodes ill for first-quarter (Q1) gross domestic product (GDP).

The year-on-year decline was led by a steep 25.6% drop in gold production, in part no doubt a reflection of the impact of the strike at Sibanye-Stillwater’s gold mines, which started on 9 March.

By contrast, mineral sales at current prices rose 6.6% year on year as commodity prices remained juiced up in March in the immediate wake of Russia’s invasion of Ukraine.

Mineral sales from coal soared 77% during the month as Moscow’s actions breathed new life – rather like Frankenstein’s monster – into the fossil fuel.

South Africa’s mine production value exceeded R1-trillion for the first time in 2021, the Minerals Council SA revealed at the Cape Town Mining Indaba this week, but the sector seems to have stumbled into 2022. There are a number of plausible explanations for this: the Sibanye strike, an apparent rise in social unrest disrupting operations and Transnet’s ongoing woes, as well as Eskom.

The bottom line is that the sector’s contribution to the GDP number in Q1 will be negative.

Mining was one of the few bright spots for the economy in 2021, with record prices translating into a revenue windfall for Treasury while record current account and trade surpluses propped up the rand. The wider economy needs the mining industry to retain its traction.

But that was before the April floods in KZN and the recent onslaught of load shedding as autumn sets in.

The Absa Purchasing Managers’ Index, a key gauge of confidence in the manufacturing sector, slid to 50.7 in April from 60 in March, signalling that the sector began the second quarter in contraction mode.

“These manufacturing numbers are nothing to write home about, but will probably be the best numbers we see for a while because of what has happened since, especially the flooding in KZN and the load shedding that has taken place,” Jee-A van der Linde, an economist at Oxford Economics Africa, told Business Maverick.

With an unemployment rate of more than 35% and a fifth Covid wave currently surging across the country, the economic outlook is bleak, to say the least.

The Mining Indaba is now over, but South Africa’s hangover after decades of policy missteps, outright looting and state failure seems to be perpetual. DM/BM