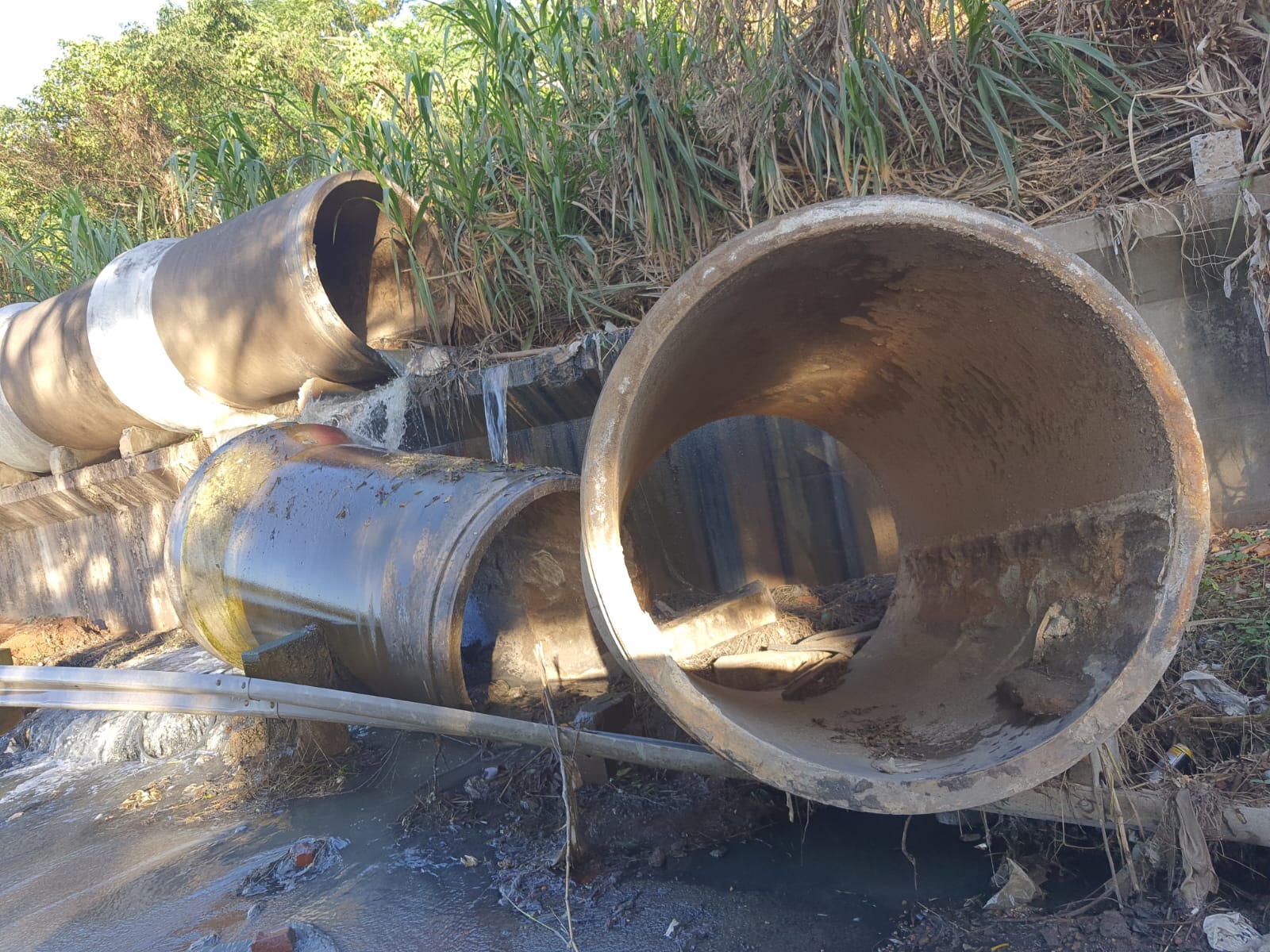 Sewage pours into the Umgeni River from a collapsed section of above-ground sewerage pipes in Prince Mhlangane Road north of Durban. (Photo: Supplied)

‘All water activities are prohibited. Beachgoers are urged to heed this warning unwaveringly, because disregarding it could result [in] outbreaks of waterborne diseases, that may be fatal,’ the city cautioned.

Several Durban swimming beaches are facing extended closures because of high sewage pollution levels and chemical and oil pollution from a variety of sources — including a sludge overflow from the mothballed Sapref oil refinery during the devastating floods last month.

Across the city, several municipal sewage treatment works, pump stations and effluent pipelines have been damaged — prompting the city to issue a strong warning to bathers to stay out of the water until E. coli (sewage bacteria) levels drop to safe levels.

“All water activities are prohibited. Beachgoers are urged to heed this warning unwaveringly, because disregarding it could result [in] outbreaks of waterborne diseases, that may be fatal,” the city cautioned in a statement.

Government sources suggest that six municipal treatment works (in North Durban, Tongaat, Umhlanga, KwaNdengezi and the South Durban area) and up to 50 sewage pumping stations around the city were damaged by the severe April floodwaters.

The contents of a sludge dam at the Sapref (Shell/BP) refinery in South Durban also ended up in the sea south of the city after the Umlaas Canal overflowed early on 12 April.

While Sapref spokesperson Hlengiwe Hlela confirmed at the time that several refinery staff had been evacuated because of flooding, she offered no details about the environmental impacts.

Neither Hlela nor Shell communications officials responded to requests for further information on Thursday, but two independent sources have confirmed that a large sludge dam at the Sapref refinery overflowed when the Umlaas Canal burst its concrete banks at the height of the recent KZN flood.

One source estimated that somewhere between one million and two million litres of sticky bituminous sludge and heavy hydrocarbons were involved, and said that a clean-up crew from Spill Tech had been engaged to clean up the mess in the vicinity of the Isipingo Beach and estuary.

As many as 130 refinery staff were also reported to have been airlifted to safety by helicopter teams at the height of the disaster.

Now that the pulse of oil/chemical flows from Sapref and other flood-hit industrial sources has ended, the bigger worry is the continued flow of untreated, raw sewage into the sea.

Nor could the city give a clear indication of how long the Durban beach closures would last.

In response to queries, municipal spokesperson Msawakhe Mayisela said: “It is hard to tell at this very moment, as that depends on many factors such as resolving blockages and sewer overflows, as well as the completion of repairs on the damaged sanitation infrastructure.

“The city is very concerned, hence the necessary precautions that have been taken so far, including but not limited to the [beach] closure and the public warning notifications. The city is continuing with daily water tests. We apologise for the inconvenience caused.”

The other burning question is: Where will the money come from to fix the mess timeously?

While there have been promises of up to R1-billion in emergency flood repair funding from President Cyril Ramaphosa and a further R371-million via disaster relief funding, city officials fear that these sums will be far too little and too late

“It’s close to the end of the financial year when most budgets have been expended and now we are being asked to perform financial miracles… it’s just not going to happen,” lamented a senior official, noting that department heads also feared the consequences of contravening the Municipal Finance Management Act.

As an example, he noted that nearly R45-million had been spent to replace a single substation to restore electricity to the Hillcrest area.

As departments juggled exhausted budgets at the end of the financial year, what was the likelihood of immediate, adequate funding to repair the city’s sewage treatment network?

One example is the collapsed sewer line on Prince Mhlangana Road in the Riverhorse Valley area near Effingham, with raw sewage spilling into the Umgeni River which ends at Blue Lagoon (or “Poo Lagoon” as it is has been dubbed following a series of unresolved sewage leaks from the Northern Wastewater Treatment Works).

The Mahatma Gandhi Road sewage substation in Durban harbour has also been dysfunctional for several months, leading to a ban on any diving and ship-cleaning operations.

“I am not very hopeful that any of this can be fixed in a hurry,” the official said. DM/OBP