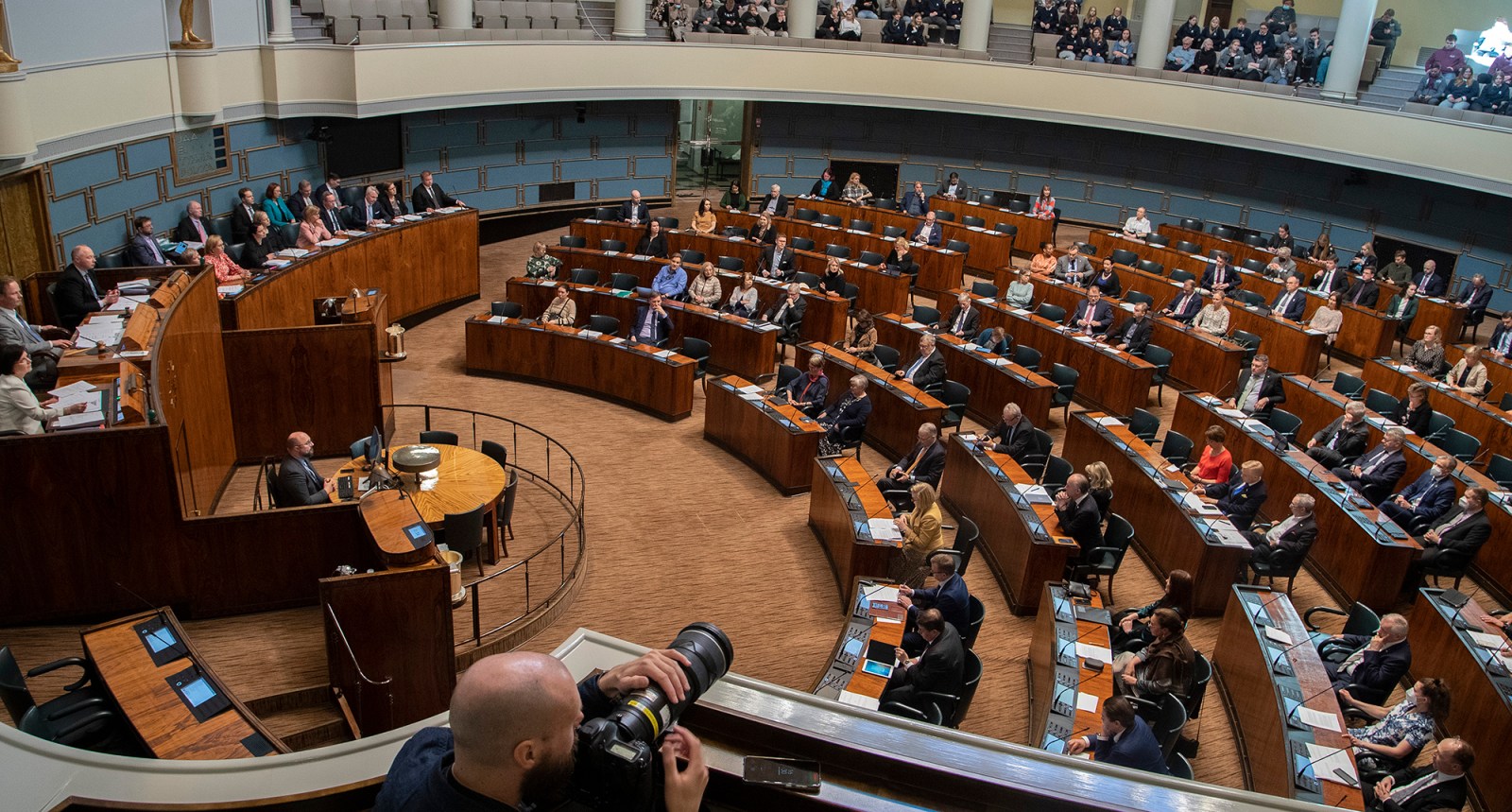 The Finnish Parliament during a session to discuss Nato membership in Helsinki, Finland, on 12 May 2022. (Photo: EPA-EFE / MAURI RATILAINEN)

G7 foreign ministers vowed to break a Russian blockade of grain in Ukrainian ports, and wheat futures rose in Chicago after a US Department of Agriculture report said production in the country would drop by one-third compared with last season.

Gas prices surged by more than 10% in Europe after Russia reduced supplies to Germany in retaliation for European sanctions over the invasion of Ukraine. Despite all the sanctions, Russia’s oil revenues have surged by 50% so far this year even as many refiners have shunned its supplies, pumping about $20-billion a month into Moscow’s coffers.

Nato chief Jens Stoltenberg said the “accession process would be smooth and swift” should Finland decide to join the military alliance, after Helsinki’s top policymakers threw their weight behind a bid.

“Twenty-five million tons of grain are blocked in Ukrainian ports, especially in Odesa,” German Foreign Minister Annalena Baerbock said at the opening of the G7 foreign ministers’ meeting in Weissenhaus in northern Germany. “This is grain which is urgently needed as food in African countries and the Middle East.”

Accusing Russian President Vladimir Putin of using grain to further divide the global community, Baerbock said, “We must stand together in the face of this food crisis.” She said the ministers “will discuss how we can unblock the Russian grain blockade, how we can get the grain into the world”.

Wheat futures in Chicago rose after a US Department of Agriculture report said production in Ukraine, one of the world’s biggest growers, would drop by one-third compared with last season.

US legislators see Finland, Sweden in Nato as likely

Leaders of a key US Senate committee described Finland and Sweden joining Nato as almost a done deal. “We’re about to get two new members,” Senator James Risch, the top Republican on the Senate Foreign Relations Committee, said at a hearing on Thursday.

“I am struck by how so much of what Putin says he was seeking to avoid he has brought about,” she said. “Finland and Sweden’s interest in Nato is a key example of that.”

Ukraine is in “very difficult negotiations” to evacuate heavily wounded defenders from the Azovstal steel plant in the city of Mariupol as part of a swap for captured Russian soldiers, Deputy Prime Minister Iryna Vereshchuk said.

Ukraine managed to evacuate all civilian women, children and the elderly from Azovstal, where they were hiding for weeks under Russian bombardment. Mariupol, home to almost 500,000 people before the war, has been under siege since March 1.

Russia cuts 3% of its flows to Germany

The cut is a result of sanctions by Russia announced late on Wednesday and is seen as a retaliation against Germany for sanctions over the war in Ukraine and for the seizure of Gazprom’s units in April. The German government took control of them to secure Europe’s gas supply and is now in talks to finance them.

As the method would involve the Russian central bank, which is subject to sanctions, using it “would be a breach of sanctions”, he stressed. He added that the commission is “very carefully” analysing letters Gazprom sent to its European clients seeking to reassure them that they can keep paying for gas without breaching sanctions as well as new decrees from the Russian side.

The EU’s executive arm is in discussions with member states on updated guidance but is “not able to put a timeframe” on when this update may be ready, McPhie told reporters.

The European Bank for Reconstruction and Development (EBRD) raised €1-billion from its shareholders for Ukraine at its annual meeting, President Odile Renaud-Basso said in Marrakesh, Morocco. The new funds are in addition to the EBRD’s plans to invest €1-billion in Ukraine this year.

Nato chief says Finnish process would be ‘smooth and swift’

Nato Secretary-General Jens Stoltenberg said “the accession process would be smooth and swift” should Finland decide to become a member of the military alliance.

“Finland is one of Nato’s closest partners, a mature democracy, a member of the European Union, and an important contributor to Euro-Atlantic security,” Stoltenberg said. “Nato membership would strengthen both Nato and Finland’s security.”

The European Union’s top diplomat, Josep Borrell, is pushing member states to boost the amount of Ukrainian military aid the bloc will finance by €500-million to €2-billion, said people familiar with the discussions.

Member states have yet to agree to the plan regarding the European Peace Facility, with Germany said to be the main holdout. The facility reimburses governments for military deliveries to Ukraine.

Lukoil announced an agreement with subsidiaries of Shell to buy a 100% share in Shell Neft, which conducts retail petroleum products sales and lubricants production in Russia, according to a statement.

Russia’s oil revenue is up 50% so far this year, even as trade restrictions following the invasion of Ukraine spurred many refiners to shun its supplies, the International Energy Agency (IEA) said in its monthly oil market report.

Moscow earned roughly $20-billion each month in 2022 from combined sales of crude and products amounting to about eight million barrels a day, the Paris-based IEA said in its monthly market report.

The European Union is edging toward a ban on Russian oil imports but has yet to get full buy-in from its 27 member states.

“If agreed, the new embargoes would accelerate the reorientation of trade flows that is already under way and will force Russian oil companies to shut in more wells,” the IEA said.

Russian setbacks in Ukraine have begun to prompt more explicit warnings in China about Moscow’s value as a diplomatic partner, in a sign of growing unease over President Xi Jinping’s strategic embrace of Russian President Vladimir Putin.

In that context, a speech by a former Chinese ambassador to Ukraine saying Russia was being “significantly weakened” by the conflict has raised eyebrows in Beijing.

One of the Ukrainian fighters holed up at the Azovstal steel plant in the port city of Mariupol has issued a direct plea on Twitter to Elon Musk.

Serhiy Volyna, commander of Ukraine’s 36th Separate Marine Brigade, asked Musk, the world’s richest man, to help arrange safe passage to another country for the defenders surrounded by Russian troops. It comes after Azov battalion officer Illia Samoilenko accused the government in Kyiv of failing in its defence of southern Ukraine and abandoning Mariupol’s garrison to its fate.

A total of 20 European companies have opened accounts, with another 14 clients asking for the paperwork needed to set them up, according to a person with knowledge of the situation, who declined to identify the companies.

Finland’s highest-ranking policymakers threw their weight behind an application to join Nato, expected within a few days. President Sauli Niinisto and Prime Minister Sanna Marin said in a statement on Thursday that they favour membership in the North Atlantic Treaty Organization.

“Finland must apply for Nato membership without delay,” they said.

The shift in Finland’s defensive position was spurred by the full-scale war Russia is waging in Ukraine. Neighbouring Sweden is also nearing a decision in the coming days and plans to send an application on Monday, Expressen reported on Thursday, citing sources it didn’t identify.

German utility RWE was forced to borrow billions to cope with wild price swings as the war in Ukraine deepens Europe’s energy crisis. The energy giant secured a third credit line, boosting its liquidity by €3-billion for the next two years, the company said in its earnings report. It now has access to a total of €8-billion to help pay down margin calls, the collateral required to back the firm’s trades.

China spoilt for choice of oil as many avoid Russia

Chinese oil buyers are spoilt for choice right now even as lockdowns hurt demand, as they can opt for everything from discounted Russian crude and sanctioned Iranian oil to regularly taken Middle Eastern barrels.

Beijing has emerged as one of the beneficiaries of the conflict in Europe, which sparked a surge in crude prices to the highest followed by a period of volatility. Beijing has stood by Moscow since the invasion, effectively clearing the way for refiners in the world’s largest oil importer to discreetly take Russian barrels that are being shunned by the US and UK.

German Economy Minister Robert Habeck said in an interview with WirtschaftsWoche that the ability of Europe’s largest economy to endure a halt “is subject to several preconditions” but it was doable.

He said the country could weather a ban so long as it fills storages, progresses on liquefied natural gas (LNG) terminals and cuts consumption. The comments come as Germany is planning four new floating LNG projects and fast-tracking approvals to slash its dependence on Russian gas.

Russia “is today the most direct threat to the world order, with a barbaric war against Ukraine and its worrying pact with China and their call for new and very much arbitrary international relations”, she said at a news briefing. DM