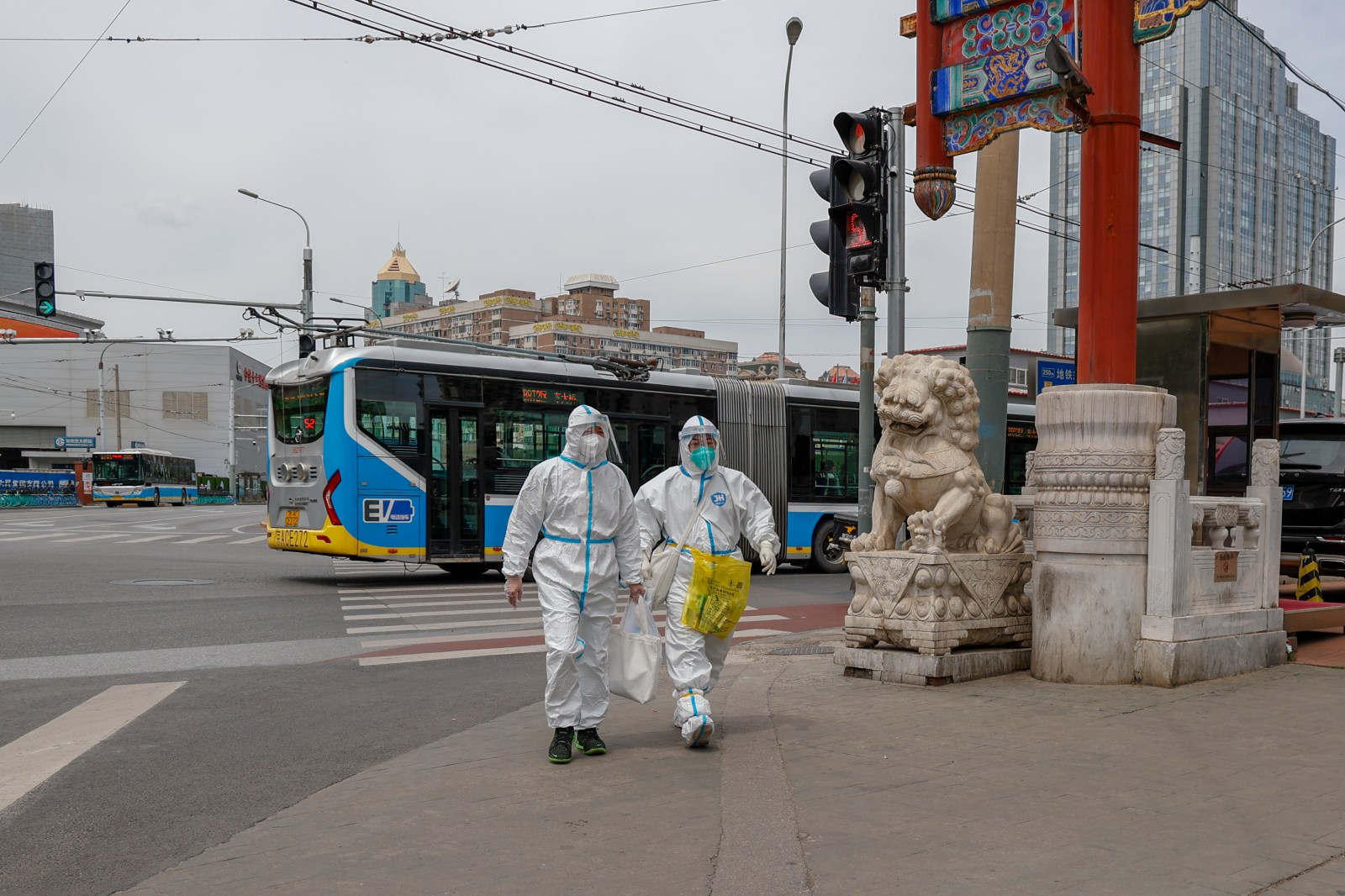 Health workers wearing protective suits walk along a road in Beijing, China, 11 May 2022. China's producer price index (PPI) rose by 8 percent down from 8.3 while the consumer price index (CPI) rose by 2.1 percent up from 1.5 percent in March as food prices rose by 1.9 percent last month from a year earlier, up from a fall of 1.5 percent in March, the National Bureau of Statistics (NBS) said. EPA-EFE/MARK R. CRISTINO

SHANGHAI/BEIJING, May 12 (Reuters) - Beijing denied it was heading for lockdown as panic buying gripped the capital on Thursday, while Shanghai combed the city for lingering Covid-19 cases in the hope of clearing the way to escape from weeks of painful restrictions.

Daily cases in Beijing have remained in the dozens, a tiny fraction of the outbreak in Shanghai and what other cities around the world now shrug off as they look to “live with the virus”.

But with gradually tightening curbs in China’s capital – most recently suspending taxi services in some virus-hit districts – rumours swirled on Thursday that it was headed for lockdown, something Beijing has avoided during the entire pandemic.

There were chaotic scenes inside some supermarkets late on Thursday as residents rushed to stock up on supplies while anxiously listening to Beijing’s daily Covid-19 news conference on their phones.

“This is quite unhealthy because people are in a very nervous mood,” said Grace Zhao, who stood in a 50-metre queue outside one supermarket in Chaoyang, Beijing’s most populous district and the epicentre of its current outbreak.

Authorities there have already banned dine-in services at restaurants, closed some malls, entertainment and tourist venues, suspended sections of its bus and subway systems and imposed lockdowns on some residential buildings.

Officials at the news conference denied rumours of a lockdown and told people not to panic-buy, but also encouraged residents to stay home and said they would launch a new round of mass testing across most of the city.

China also said on Thursday it would “strictly limit” unnecessary travel outside the country by Chinese citizens. Most international flights in and out of China have been cancelled during the past two years.

NOT OUT OF THE WOODS

Shanghai – the commercial hub of 25 million people which has been battling a far larger outbreak and endured weeks of lockdown – has in recent days been tightening curbs in a push to eradicate the virus by the end of the month after making significant recent progress, according to data this week.

Shanghai’s mass testing detected just two new cases outside areas facing the strictest curbs on May 11, officials said on Thursday, after finding none the previous day.

Significantly, the cases were found in two of the city’s 16 districts, Xuhui and Fengxian, that authorities said this week were among eight that had achieved “zero Covid-19” status, having had no community cases for three consecutive days.

The latest cases show the difficulty in finishing off the highly transmissible Omicron variant despite ruthless enforcement of some of China’s harshest restrictions since the virus emerged in the city of Wuhan in late 2019.

The new infections also raise concern about how long a return to normal life might last under China’s uncompromising “zero Covid-19” policy after the lockdown is finally lifted.

Yu Linwei, vice-governor of Xuhui, told a news conference his district would not relax anti-epidemic efforts, making sure everyone was tested and that new cases and their close contacts were isolated in quarantine as quickly as possible.

Overall, Shanghai reported more than 1,000 new cases, but they were in areas already under the tightest controls and significantly below peak.

The cases found in the relatively freer communities are the ones most closely watched for clues as to where Shanghai’s outbreak is heading.

China has doubled-down on its global trend-bucking policy, putting hundreds of millions of people in dozens of cities under movement curbs, causing significant economic damage and disruption to international trade and supply chains.

With factory workers and consumers stuck at home and many businesses forced to suspend operations, China’s export growth is at two-year lows and unemployment near two-year highs. Youth joblessness is at 16%, the highest since July 2021. Read full story

The yuan CNY=CFXS hit a new 19-month low on Thursday, having dropped almost 6% in under a month.

Authorities say their Covid-19 policy is saving lives and point to the millions of deaths caused by the virus elsewhere to justify the strategy.

But for many residents it is taking a heavy toll.

In an apartment building in Shanghai’s central Jing’an district, residents were told once again they could not leave their flats after being allowed out last week to walk around the compound.

“As restrictive as it was, those 10 minutes of freedom, being able to get some fresh air outside my building and walk my dog, kept my sanity,” building resident Stephanie Sam, 27, said on the WeChat social media site.

The re-tightening of curbs has “taken away the last sliver of hope I had about this dystopian nightmare ending anytime soon”, she said.

The district has reported zero community cases and, like other areas in the city, has entered what authorities call “silent management mode”. That typically means boards or fences around buildings, deliveries forbidden and residents once again confined to their homes.