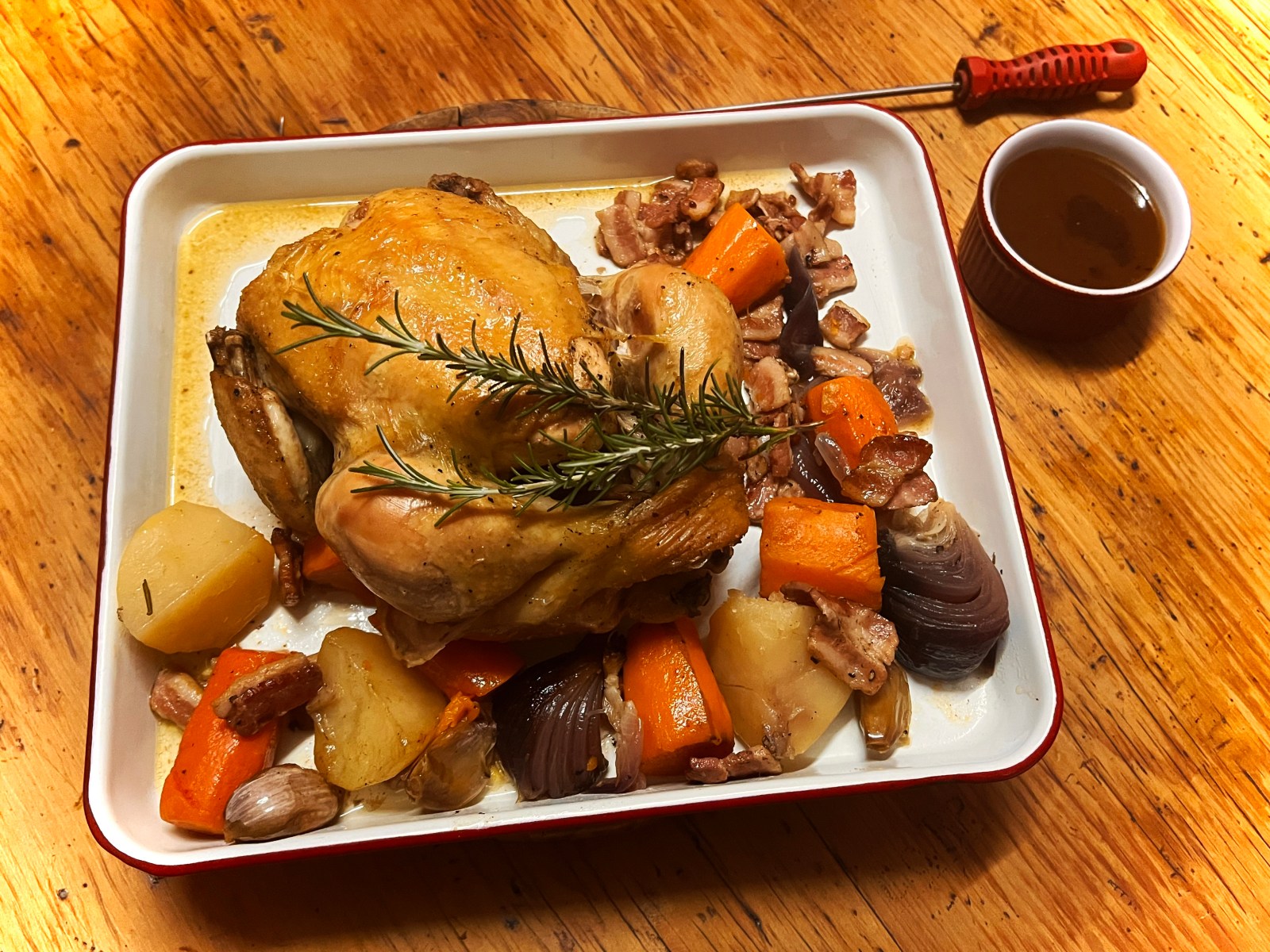 Whatever happened to the pot roast? Fashion seems to have removed it from our kitchen routines. Let’s bring it back this winter, starting with this pot roast of a whole chicken with chunky vegetables.

To roast or to pot roast? The difference is liquid. We usually roast meat in a very hot oven after oiling or buttering it, but with no liquid such as stock or wine added. A pot roast eschews those in favour of liquid: stock, wine, or both, as well as vegetables which release their own moisture and flavour into the dish.

A pot roast can be cooked on the stove top, but I prefer the oven. In fact: two ovens: a Dutch oven, inside your oven. Dutch ovens are those heavy cast-iron ones by manufacturers such as Le Creuset, or the black ones made for the braai. I used the former, but any large, heavy pot suitable for the oven will do.

A whole chicken is unusual for a pot roast, but it is a thing. And it makes for a deliciously hearty supper to warm a cold evening. There’s a whack of garlic in this. Oh, and there’s bacon in it. Of course.

1 large red onion, outer layer removed, the onion cut into 8 wedges through the root (so that the wedges remain intact)

8 whole garlic cloves, in their husks

Preheat the oven to 180℃. Heat a little olive oil in a large Dutch oven with a lid, on a moderately high heat on the stove top.

Season the outside of the chicken and the cavity with salt and black pepper.

Brown the chicken in the Dutch oven on all sides for about 15 minutes. I use two wooden spoons, one in the cavity, to turn it. Use the same spoons to remove it to a large bowl while you sauté the vegetables.

Add the butter to the pot. When it has melted, add the bacon and cook, stirring, for a minute, then add the chunks of potato, sweet potato, carrot, red onion wedges, whole garlic cloves and rosemary sprigs and toss them around in the butter on a moderate heat. Season with salt and black pepper.

Move most of the vegetables to the edges of the pot and place the chicken in the middle, breast side up.

Pour a half cup of white wine and a half cup of chicken stock over, put the lid on, and place the pot in the preheated oven on a rack low enough to accommodate its bulk.

Pour off the sauce into a heavy bottomed saucepan to reduce it into the sauce to serve with the chicken.

Put the Dutch oven back in the oven, uncovered, for 30 minutes. This will brown the skin, though it will not be crispy in the way that a conventional roast chicken would.

To check that the chicken is cooked to the bone, insert a skewer all the way to the bone and press the flesh with your fingers at the point where the skewer was inserted. The juices should run clear, with no pink at all.

Serve the chicken with the braised vegetables and the sauce. DM/TGIFood