Veterans seeking apartheid reparations finally force meeting with minister, but come away with nothing – again 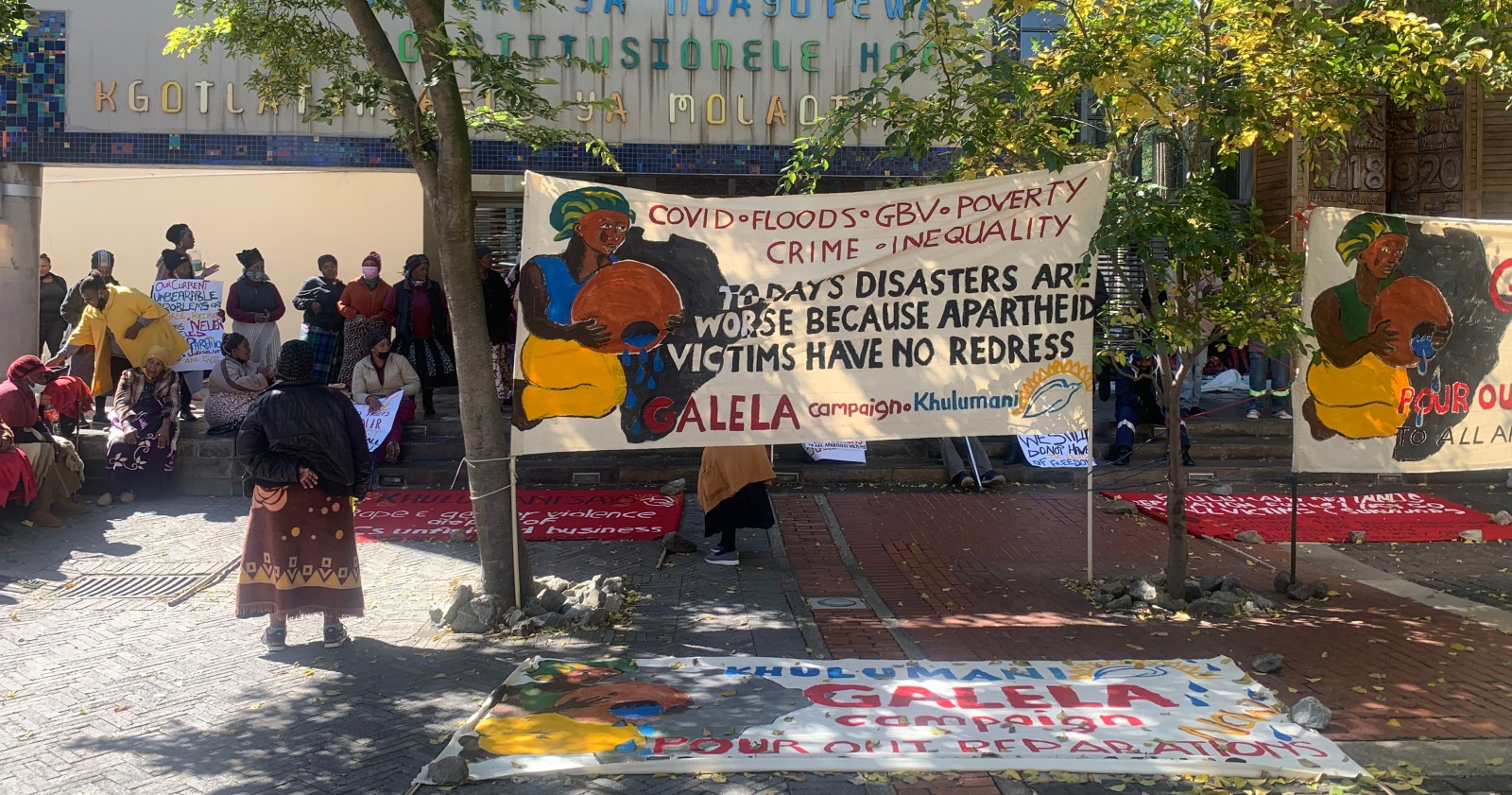 The Galela Campaign protest outside the Constitutional Court began with about 140 people on 27 April 2022. Now the core group numbers about 60, all of them older than 50 and many in their sixties and seventies, sleeping on blankets. (Photo: Supplied)

After decades of presenting memorandums, calling for meetings and holding protests – and being ‘ignored’ by the government – elderly campaigners seeking justice for rights abuses during apartheid finally got to make their case to the justice minister directly.

It took 13 cold nights sleeping outside the Constitutional Court to finally get Justice Minister Ronald Lamola to listen to struggle veterans trying to get apartheid reparations.

Lamola, his deputy John Jeffrey and justice spokesperson Chrispin Phiri arrived at the ConCourt in Johannesburg at noon on Tuesday, 10 May 2022 to meet the elderly and frail members of the Galela Campaign.

Galela means “pour” in Xhosa, and refers to the need for reparations to begin to flow.

Reparations were promised to victims of apartheid human rights violations after the conclusion of the Truth and Reconciliation Commission in 1998, but these were downgraded severely in 2003 by then president Thabo Mbeki. The Khulumani Support Group (KSG) has been fighting against the “closed list” of victims ever since.

The veterans, who represent thousands of others nationwide seeking help, told the three justice officials they felt disrespected and angry. After decades of presenting memorandums, calling for meetings and holding protests, the government had pointedly and continually ignored them, they said.

After an intense discussion, the minister said the department could only pay reparations in line with existing regulations and processes, and claimed only the President or Parliament could resolve the issue.

The Galela veterans pointed out that appeals to the President and to Parliament over 23 years have led to them being told the minister of justice would deal with the matter. Lamola then said he would have to ask President Cyril Ramaphosa to meet them.

The veterans said they would continue to sleep outside the ConCourt until the President came to them. They emphasised that this must happen “now”, not in days or weeks.

“We are saying, since he, the minister of justice, says he cannot fix the failed reparations, then the President must come and do so. Now. We will be here waiting for him,” they said.

The Galela Campaign began after yet another failed request for a meeting with the Justice Department on or before Freedom Day on 27 April 2022. They then decided to sleep outside the ConCourt until they were heard properly and their demands acted upon.

“We have consulted, convened, marched, pleaded and toyi-toyied. We have been told, ‘yes, of course we will deal with this’. We are still without redress,” they said in a statement on the eve of Freedom Day.

Early in May, Phiri apologised “with deep respect and recognition of the pain people felt”, but claimed letters to the ministry had not been delivered. He proposed taking their concerns to the minister, who would then meet a few representatives of the group in Pretoria. The veterans refused.

At a previous sleep-out at the ConCourt in October 2021, 88 veterans, mostly grandmothers, were part of countrywide demonstrations by the KSG in support of a memorandum to Ramaphosa and Lamola, and delivered to the Gauteng premier’s office, the South African Human Rights Commission in Johannesburg, the Polokwane provincial Department of Justice offices, and Parliament.

The week before, Khulumani sent the memo to the Presidency and the justice minister, asking them to respond to the arrival of demonstrators at Constitution Hill.

National government officials neither responded nor sent a representative to receive the memo, nor met the demonstrators. One elderly woman said at the time: “We’ve spent years knocking on the door of the government. They have spent years lying to us, making promises they don’t keep. We are neglected by our own government. The pains are getting worse, our members are dying on a daily basis. Even these crutches we use to walk with are finished.”

We have been paralysed and damaged by the chemicals of the apartheid government, the teargas that they threw at us day after day.

After five nights, another Galela statement said: “We will not go home until the minister comes here to speak to us, to hear our demands directly from us, to see our pain and hear our voices, to know the hardship we have been through for the past days, just to bring our problems to the attention of our own government. We have been waiting 28 years (since 1994) for the redress that we fought for all our lives.”

In the middle of this, one of the veterans, a Mr Meyi from Cape Town, had an asthma attack and was taken to hospital. He was discharged later.

In a statement of solidarity, the Foundation for Human Rights, which supports the Galela Campaign, attacked the “arbitrary decision” by Mbeki to lower individual reparations from R20,000 a year for six years to a one-off payment of R30,000 per victim or surviving family. The South African Centre for Transitional Justice also issued a call to action for 5 May for people to come out and support the veterans.

The meeting with the minister fell through when the ministry did not confirm covering transport costs, and the veterans’ demands were not addressed. After nine nights, they issued another statement: “We do not stand here as individuals, or as a few demonstrators. We stand here on behalf of the thousands of South African veterans, victims and survivors who suffered damage from apartheid crimes, and who are still living with open, unhealed wounds.

“We stand here as people to whom our democratic government promised redress, reparations and justice. Today we are still struggling to survive on unfulfilled promises and empty stomachs.

“We say: we, the victims of apartheid human rights violations, have been re-victimised by the very government we fought to create. Our government closed down the TRC, drew a line under its work, and said this process is done and dusted. Our government then further failed to roll out the redress and justice that the TRC determined was the pathway forward towards healing and reconciliation.”

Their demands include immediate assistance for those who “spent their last pennies to come here”, so they could return home “with dignity and honour”, and the immediate creation of a process to repair the failed reparations policy, regulations and administration that have caused so much hardship for veterans and victims of apartheid.

One veteran said: “We are a traumatised society. Day and night we have nightmares, stress. We develop sicknesses. As I stand here, I am unable to see well, losing my eyesight. We have been paralysed and damaged by the chemicals of the apartheid government, the teargas that they threw at us day after day. I am here to demand proper medication and reparation.”

Another noted bitterly: “The most painful part is when our governments pays benefits to perpetrators and denies us reparations. We don’t know why they reached that point where they give pensions and legal support and medical benefits to those who hurt us so badly, but won’t pay us reparation.”

The courts recently forced the South African Police Service to pay the legal costs of former security policemen who are about to stand trial for murder and kidnapping. And after Vlakplaas hit squad boss Eugene “Prime Evil” de Kock was released from prison, he was paid a stipend by the government. Events such as these raise questions about who the government is really serving, says KSG secretary Judy-Ann Seidman. DM/MC