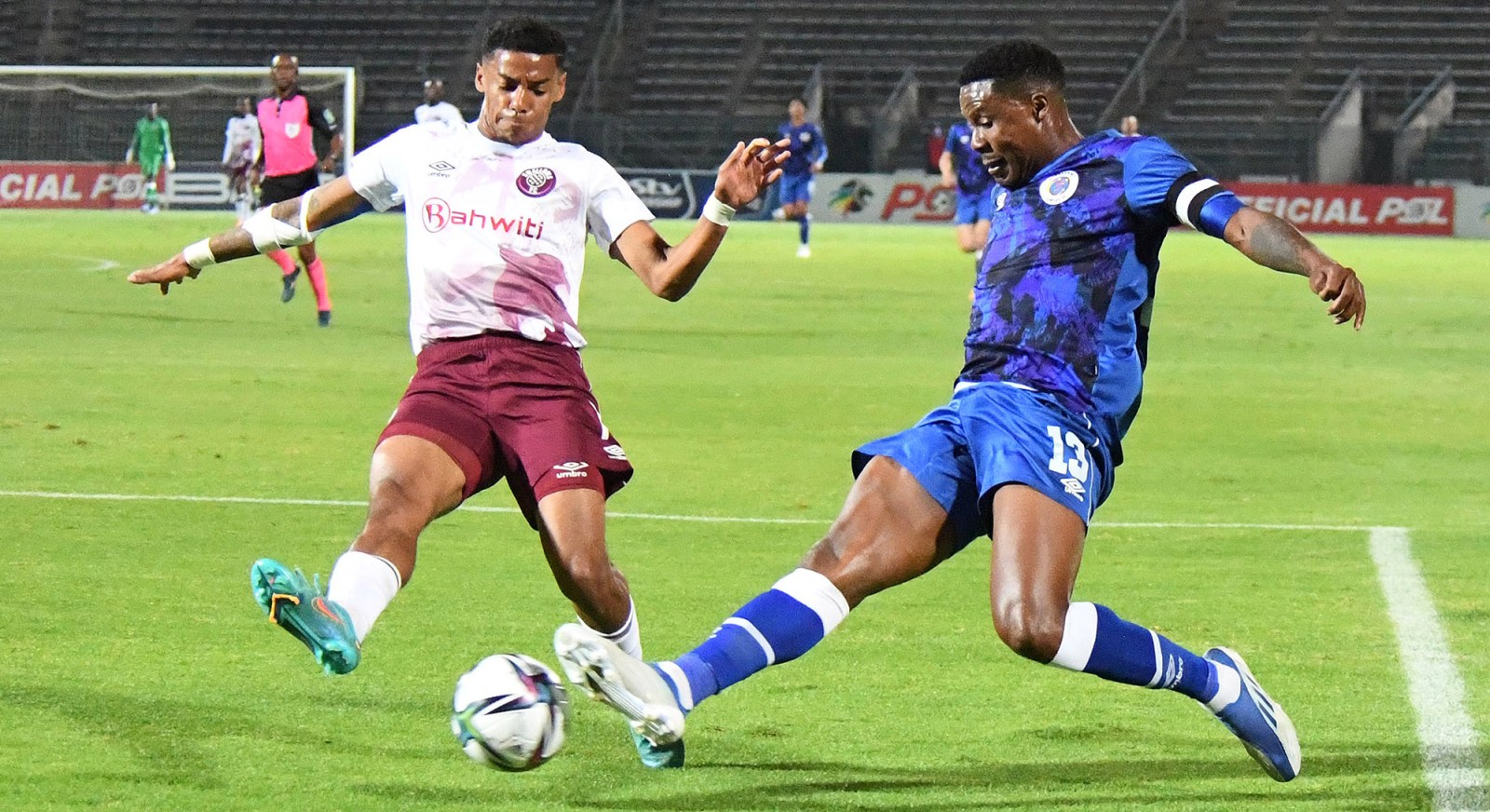 Dillan Solomos of Swallows FC and Thamsanqa Gabuza of SuperSport United during their DStv Premiership match at Lucas Moripe Stadium in Pretoria on 6 May 2022. (Photo: Lefty Shivambu / Gallo Images)

As many as five teams can still lose their DStv Premiership status through relegation this season.

While Mamelodi Sundowns wrapped up their fifth DStv Premiership title on the trot with four games to spare, with only two games left for each of the candidates, it is still unclear who will suffer the dreaded relegation drop from the Premiership.

With two rounds of Premiership matches to be played, it is the Limpopo side Baroka that anchors the table. They are in 16th place with 22 points. Swallows are 15th, with two points fewer. Tim Sukazi’s Galaxy are third-bottom on 26. Chippa, 14th, are on 28 points. Maritzburg have the same number of points as the Gqeberha-based outfit.

Baroka and Swallows are in the most danger of direct relegation, with Galaxy hovering just outside the red zone. On paper, they also have an easier run-in than the other two contenders for the chop.

The Rockets — who have won just six of their 28 league games to date (losing 14 and drawing eight) — tussle with Marumo Gallants and Chippa United in their final two matches of the campaign.

A win in one of those match-ups would probably be enough to preserve the Mpumalanga team’s Premiership status — which is just two seasons old.

Galaxy’s German coach Sead Ramović says he is relishing the challenge and pressure that has come from the position his team finds itself in.

“I enjoy the pressure because I’m the type of person that enjoys taking responsibility. I’ve played all my life under pressure. I’ve faced pressure my whole life. Football is all about pressure. The pressure that we have in the football world is not compared to other types of jobs in the world,” Ramović explained.

The former Wolfsburg goalkeeper joined the Rockets five games into the 2021/2022 season — replacing Owen da Gama, who was dismissed after a poor run of three losses and two draws in that early-season period.

Under Ramović the results have not been much better, hence the current predicament.

However, the young team has shown glimpses of the type of exciting football it could play were it not for the prevailing circumstances — which require that the team momentarily puts self-preservation over flair and flamboyance.

“Everyone knows where we are on the log. I don’t have to emphasise that. The log is there to show. They understand that if we don’t get points, we will be in big trouble. If the players can’t handle the pressure, then they are in the wrong place,” Ramović stated.

“We have to work hard. We have to get that self-belief back. We will analyse our next opponents. We will come up with the proper game plan. We are ready for the tough fight.”

On paper, the fight for survival will be tougher for basement-dwelling Baroka and the low-flying Swallows.

The former face stern tests against SuperSport United, as well as Maritzburg in KwaZulu-Natal. Swallows face a must-win game against Chippa before ending their season with a clash against Kaizer Chiefs.

“I believe we can do it [survive relegation]. I have always said we’d do it,” said Swallows’ coach, Dylan Kerr — who is no stranger to relegation scraps after surviving such situations with the likes of Black Leopards and Baroka in the past.

Though not safe yet either, Maritzburg and Chippa can breathe a bit easier knowing that avoiding defeats in their final two games should secure their Premiership spot for at least one more season.

Chippa in particular have their destiny in their own hands. They clash with both Swallows and Galaxy in their final two games. Navigating those ties properly will ensure their safety.

Maritzburg face Baroka and Orlando Pirates in their final matches of the season.

Negative results in those games might see them fall to 15th, an unwanted spot in the relegation/promotion playoffs — versus the teams that will end second and third respectively in the second-tier GladAfrica Championship. DM