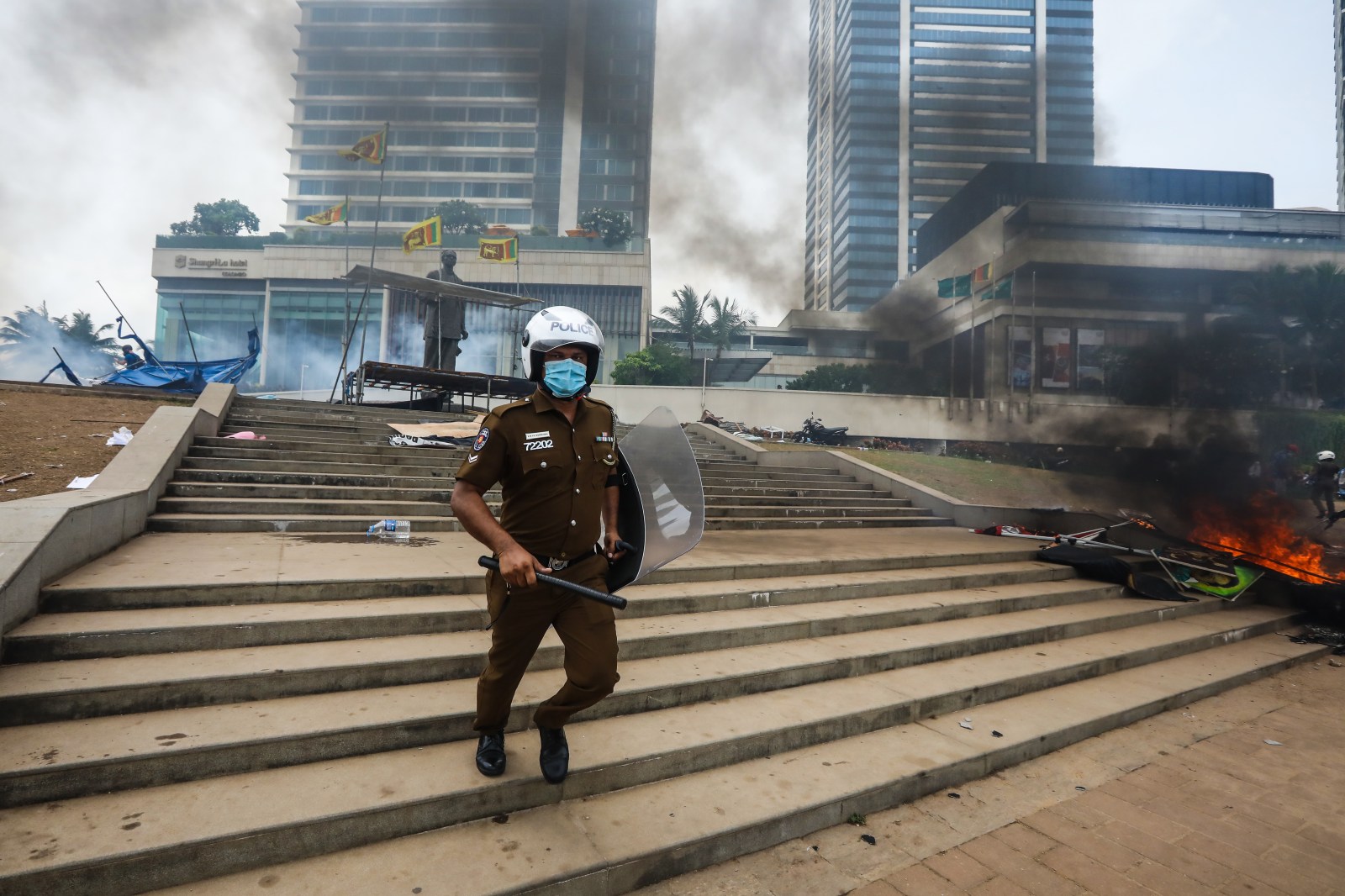 A Sri Lankan police officer walks past torched tents of anti-government protesters by government supporters, during clashes near the Presidential Secretariat in Colombo, Sri Lanka, 09 May 2022. The local government enforced an island-wide curfew starting 09 May. Protests have been rocking the country for weeks, calling for the resignation of the president and prime minister over the alleged failure to address the current economic crisis. EPA-EFE/CHAMILA KARUNARATHNE

COLOMBO, May 10 (Reuters) - Sri Lanka gave emergency powers on Tuesday to its military and police to detain people without warrants, after a day of clashes that killed seven people and injured more than 200, in violence that prompted Prime Minister Mahinda Rajapaksa to resign.

Despite sporadic reports of unrest, the situation calmed by Tuesday, said police spokesman Nihal Thalduwa, adding that about 200 people had also been injured in violence that led to an islandwide curfew until 7:00 a.m. (0130 GMT) the following day.

The government of President Gotabaya Rajapaksa, the younger brother of the prime minister, outlined broad powers for the military and police to detain and question people without arrest warrants.

The military can detain people for up to 24 hours before handing them to police, while private property can be searched by force, including private vehicles, the government said in a gazette notification on Tuesday.

“Any person arrested by a police officer shall be taken to the nearest police station,” it said, fixing a 24-hour deadline for the armed forces to do the same.

Some analysts expressed concern over the potential for abuse of the emergency measures.

“In a situation where there is both a state of emergency and curfew who can monitor to ensure these regulations are not abused?” said Bhavani Fonseka, of the Centre for Policy Alternatives think tank based in Colombo.

The president had already declared a state of emergency on Friday as protests escalated.

The attacks on government figures came in apparent reprisal for an incident just hours before Rajapaksa’s resignation.

Rajapaksa spoke to hundreds of supporters gathered at his official residence on Monday following reports that he was considering stepping down.

After his remarks, many of them, armed with iron bars, stormed a camp of those protesting against the government, beating them and setting fire to their tents. Read full story

Police fired water cannon and tear gas to disperse the skirmishers, after having initially done little to hold back the government supporters, according to Reuters witnesses.

Thousands streamed into the streets in celebration after Rajapaksa’s resignation, but the mood quickly became tense.

Protesters attempted to tear down the gates of Temple Trees, his residence in the centre of Colombo, where broken glass and discarded footwear littered the surrounding streets on Tuesday, after some of the night’s worst clashes.

It has sought assistance from multilateral lenders such as the World Bank and the International Monetary Fund, as well as Asian giants India and China.

Former finance minister Ali Sabry, who resigned on Monday, along with the rest of Rajapaksa’s cabinet, has said useable foreign reserves stand at as little as $50 million.

Shortages of fuel, food and medicine have brought thousands onto the streets in more than a month of protests that had been mostly peaceful until this week.

By Alasdair Pal and Uditha Jayasinghe

(Reporting by Alasdair Pal and Uditha Jayasinghe in Colombo; Editing by Clarence Fernandez)