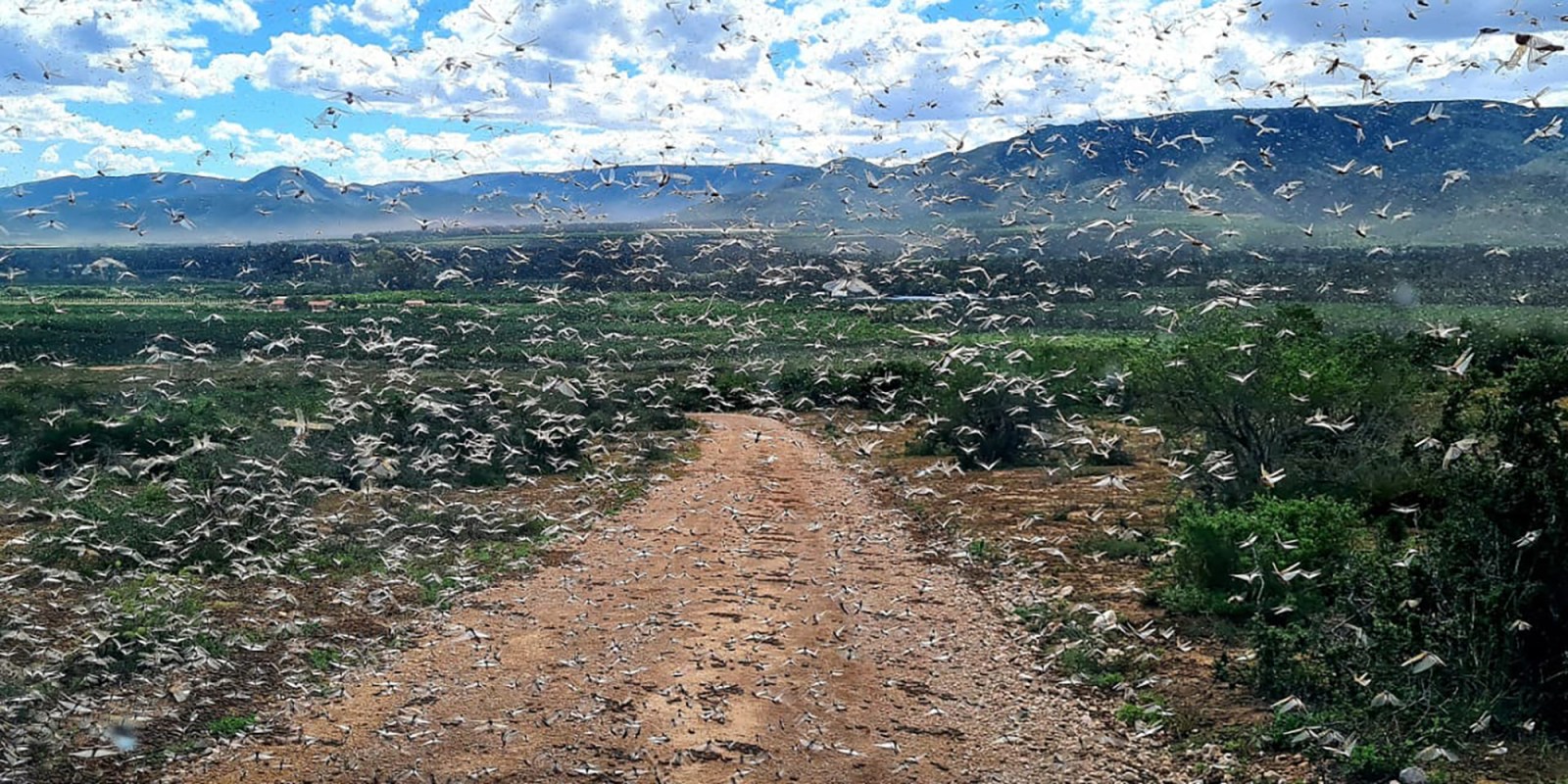 The fight against swarms of locusts across the Eastern Cape continues as the insects move from the Sarah Baartman region to Amathole.

The locust swarms that have damaged and devoured thousands of hectares of grazing in the Karoo and parts of the Sarah Baartman area have now moved into the Amathole district.

According to entomologist Dr Roger Price, the locust plague in parts of the Northern and Western Cape and Karoo is by far the biggest outbreak in 25 years.

“On Saturday morning the weather did not permit them to move as they were lined in a big swarm waiting for the sun to come out. Once the sun came out, they moved to the next farm,” he said.

Palmer said spraying has been put on hold due to the impact it would have on the environment.

A government message to farmers said officials from the Department of Rural Development and Agrarian Reform (DRDAR) and the Department of Agriculture, Forestry and Fisheries (DAFF) had visited the sites affected by locusts and warned that spraying of insecticides was not allowed within 100 metres of any wetlands or rivers.

“All statutory laws will apply and any person intending to use any toxins on the swarm independent of DAFF or DRDAR officials can face charges under all relevant legislation. I thus strongly advise to coordinate any action with the municipal disaster management section prior to embarking on unilateral action,” read the message.

Mandy Roets, a citrus and livestock farmer in Sundays River Valley, said locusts had invaded their area in swarms bigger than she’d ever seen before. She said the insects devoured all their grazing.

“The grazing camps for sheep and all the soft leaf plants were stripped. Fortunately, we grow our own lucerne and so we supplement the feeder for animals, and they still have enough food out in the field,” she said.

According to Roets, the last time there was an infestation of this size was in 1935, when swarms in the Grahamstown area moved down towards Gqeberha and then to the southern part of the valley, stripping the leaves from thousands of citrus trees.

“At first we were all panicking that if the locusts came to the valley and stripped the leaves off the trees, the fruit would fall off and that would be disastrous. That would have been the end of the entire economy of the valley because it runs on the citrus industry,” she said.

She said they were unable to use insecticides because of the fruit on the trees.

“We had no way of protecting ourselves. When the first lot started coming in, we burnt tyres around the orchards because locusts don’t like smoke and that kept them away. We can’t do that indefinitely… if all the farms have tyres burning, that could become a fire hazard.”

Roets said it was fortunate that grass had grown between the fruit trees, and that it hadn’t been sprayed with weed killer.

“They ate all the grass down and stayed off the citrus trees. That was a blessing for us, so there is no financial loss. The grass is trying to recover, but the growth is just too slow with winter coming,” she said.

Roets said it was a plus that animals and birds were making a meal of the locusts.

“The food supply for frogs, birds, bat-eared foxes and guinea fowl was suddenly in huge abundance. We also noticed that the ground was full of droppings from the locusts. We had a chemical company take samples of that to run tests so we can see what value it has to put back into the ground. We are still waiting for the results,” she said.

“The locusts have gone now, but I have never seen anything like it. We don’t normally have locusts in our area… we have the odd grasshopper. The locusts have moved on to the Addo, Colchester and Uitenhage areas,” said Roets.

Eastern Cape MEC for Rural Development, Nonkqubela Pieters, said the first migration of the brown locusts in the province was detected late last year and the department subsequently issued an alert.

Peters said her department and the department of agriculture were conducting awareness campaigns about brown locust containment and management in affected farms and communities.

“The control methods that are being employed at this point are aerial and ground spraying. The total hectarage controlled through aerial spraying in the Eastern Cape is 20,659.5,” Pieters said.

“Alice, Hogsback and Keiskammahoek have been the latest areas where the destructive brown locusts were detected in the Eastern Cape. In response to the latest migration in the Amathole district, the services of an aerial sprayer have been acquired,” said Pieters.

“The department has noted reports of private exterminators who, in some instances, are said to be using chemicals that not only kill the insects, but also contaminate the soil, while other reports point to incidents of over-spraying.”

Pieters said that to help bring the situation under control, the department was training its extension officers and private land users on detecting the brown locusts and controlling them through the use of chemicals on the ground.

“Farmers are also urged to obtain GPS coordinates of where they have spotted the pests resting in order to notify aerial controllers. When spraying occurs in grazing lands, animals must be removed from the camps in order to adhere to the withholding period of insecticides,” added Pieters.

She said the collaborative approach between government and organised agriculture is expected to help control the infestation, even in residential areas where backyard food production often takes place and aerial spraying cannot be conducted. DM/OBP