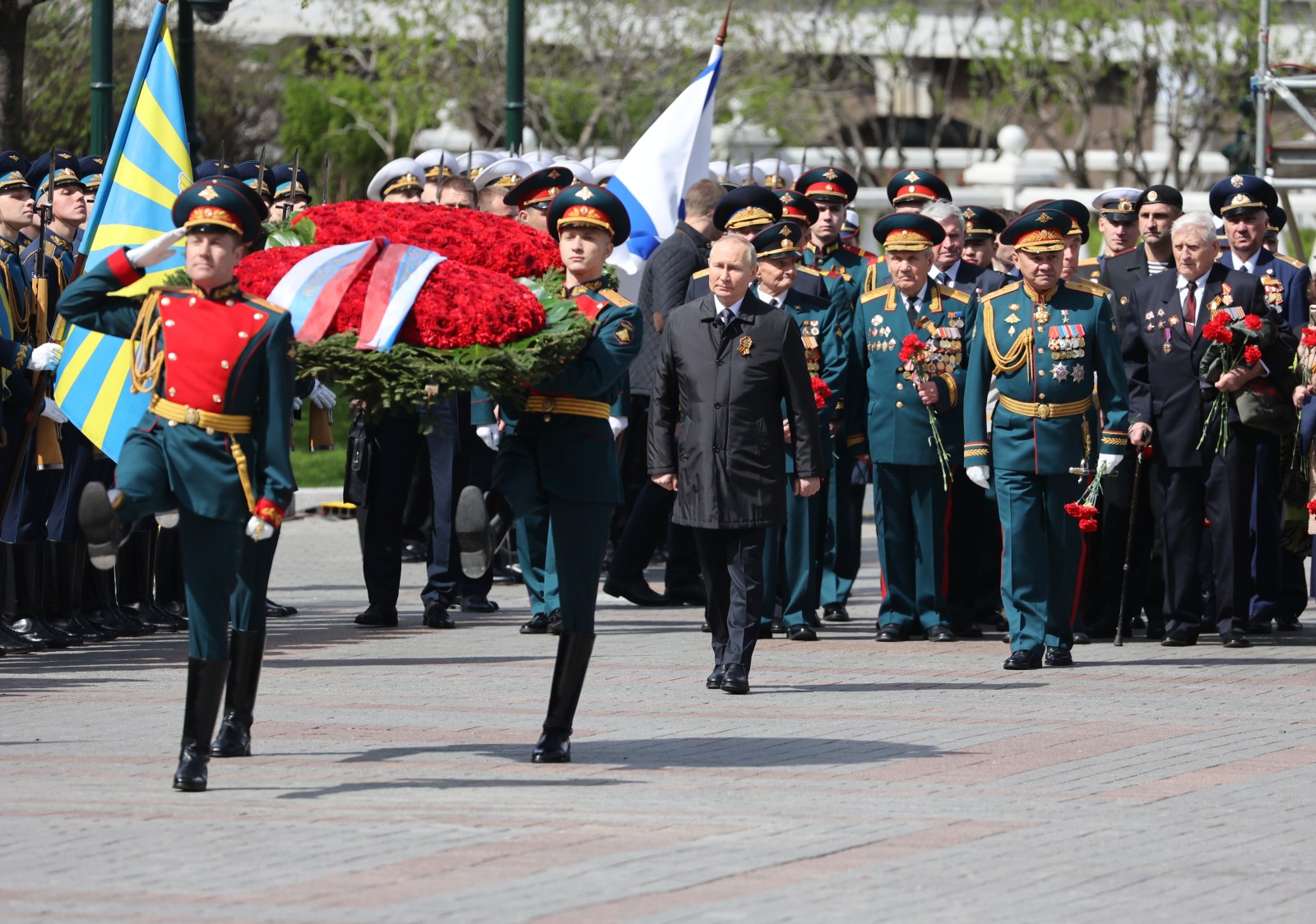 Russian President Vladimir Putin attends a flower-laying ceremony at the Tomb of the Unknown Soldier by the Kremlin wall after the Victory Day military parade in Moscow, Russia, 09 May 2022. Russia marks Victory Day, Nazi Germany's unconditional surrender in World War 2, with the annual parade in Moscow's Red Square on 09 May, after more than two months of attacks on Ukraine. EPA-EFE/ANTON NOVODEREZHKIN / KREMLIN POOL / SPUTNIK MANDATORY CREDIT

KYIV/ZAPORIZHZHIA, Ukraine, May 9 (Reuters) - President Vladimir Putin told his armed forces at a parade of Russian firepower in Moscow on Monday that they were fighting for their country but he offered no clues as to how much longer their assault on Ukraine, now in its 11th week, would last.

Ukrainian officials said heavy fighting was underway in the country’s east and warned people to take cover from Russian missile strikes as Moscow marked the 77th anniversary of the Soviet Union’s victory over Nazi Germany in World War Two.

Just before the troops and tanks paraded in Moscow’s Red Square, Russian satellite television menus were altered to show viewers in the Russian capital messages condemning the war in Ukraine.

“The TV and the authorities are lying. No to war,” screenshots obtained by Reuters showed before they disappeared.

In his address, Putin said Russia’s “special military operation” was a purely defensive and unavoidable measure against plans for a NATO-backed invasion of lands he said were historically Russia’s, including Crimea.

“Russia preventively rebuffed the aggressor,” he said, offering no evidence for what he called open preparations to attack Crimea and Ukraine’s Donbas region.

In 2014, Russian-backed separatists seized parts of Donbas in eastern Ukraine and Russia annexed Crimea from Ukraine the same year. Moscow then massed troops around Ukraine last year ahead of an all-out invasion that Kyiv and its Western allies say was entirely unprovoked.

Putin did not mention Ukraine by name in his speech and offered no indication of how long the war might continue.

There was also no reference to the bloody battle for Mariupol, where one of the Ukrainian defenders holed up in the ruins of the Azovstal steel works pleaded with the international community to help evacuate wounded soldiers.

“We will continue to fight as long as we are alive to repel the Russian occupiers,” Captain Sviatoslav Palamar said.

Russian forces have devastated villages, towns and cities and driven nearly six million Ukrainians to flee since they invaded Ukraine on Feb. 24.

‘STAY IN THE SHELTERS’

Ukraine’s Deputy Defence Minister Hanna Malyar said Russian forces were now trying to advance in eastern Ukraine, where the situation was “difficult”, but had moved back from the city of Kharkiv, where a local official reported heavy Russian shelling.

President Volodymyr Zelenskiy confirmed the deaths of dozens of people in the Russian bombing of a school in eastern Ukraine on Saturday. “About 60 people were killed, civilians, who simply hid at the school, sheltering from shelling,” he said.

There was no response from Moscow, which says it does not target civilians.

Three more civilians were killed in Kharkiv and three in the Luhansk region, its governor Serhiy Gaidai said, adding that Russian forces were trying to cut off a route to safety known as the Road of Life. It was not immediately possible to verify the reports.

“Today we do not know what to expect from the enemy, what terrible thing they might do, so please go out onto the street as little as possible, stay in the shelters,” he said on Monday.

Zelenskiy said his country would win against Russia and would not cede any territory.

“There is no invader who can rule over our free people. Sooner or later we will win,” he said in his nightly address.

Putin casts the war as a battle against dangerous “Nazi”-inspired nationalists in Ukraine – an allegation Kyiv and its allies say is nonsense – and links it to the challenge the Soviet Union faced when Adolf Hitler invaded in 1941.

“All plans are being fulfilled. A result will be achieved – on that account there is no doubt,” Putin was quoted as saying after the parade.

Britain’s Defence Minister Ben Wallace said Putin and his inner circle of generals were mirroring the fascism and tyranny of Germany’s Nazi regime and hijacking the proud history of their forebears.

The Russian defence ministry said it had destroyed a U.S.-made counter-battery radar station, used to detect where firing has come from, near the eastern Ukrainian town of Zolote.

Moscow has come under increasingly punishing sanctions since its invasion on Feb. 24, with trade heavily impacted and assets seized. A German official said agreement by European Union member states on new measures – expected to include an embargo on Russian oil – was close.

The EU’s foreign policy chief told the Financial Times the bloc should also consider using frozen Russian foreign exchange reserves to help pay for the cost of rebuilding Ukraine after the war.

Mariupol is key to the war aims Moscow announced after it failed to seize Kyiv in the early days of the war, linking the Crimean Peninsula and the parts of the eastern regions of Luhansk and Donetsk in Donbas controlled by separatists.

The Ukrainian-controlled city of Zaporizhzhia, about 230 km (140 miles) northwest of Mariupol, held an all-day curfew on Monday for fear of Russian shelling.

Dozens of people who had fled Mariupol and nearby occupied areas had earlier waited to register as evacuees.

“There’s lots of people still in Mariupol who want to leave but can’t,” said history teacher Viktoria Andreyeva, 46, who said she had just reached the city after leaving her bombed home in Mariupol with her family in mid-April.

“The air feels different here, free,” she said in a tent where volunteers offered food, basic supplies and toys to the evacuees, many travelling with small children.

By Pavel Polityuk and Alessandra Prentice