South African mining companies have been posting record earnings on record prices, resulting in record taxes paid to Treasury. It all adds up to a trillion-rand baby.

The value of South Africa’s minerals production exceeded R1-trillion for the first time in 2021, the Minerals Council SA – the main mining industry body – said on Monday at the start of the Cape Town Mining Indaba.

“The value of production was just shy of R1.2-trillion in 2021 and well above the R910-billion achieved in 2020. The boost in value was a result of improved commodity prices, which were 40% higher year on year in dollar terms and 20% higher in rand terms. A 12% firming of the rand against the dollar meant mining companies did not reap the full benefit of international commodity prices,” said the Minerals Council.

These are among the data sets unveiled in the Mineral Council’s Facts and Figures 2021, an annual publication that tracks the mining sector’s performance on a range of fronts.

“The performance of the mining industry after two years of disruptions caused by the Covid-19 pandemic played a critical role in stabilising South Africa’s economy, which had slowed under lockdown conditions, and it injected capital into the fiscus, allowing the government to support millions of people with a basic income grant,” the Minerals Council said. 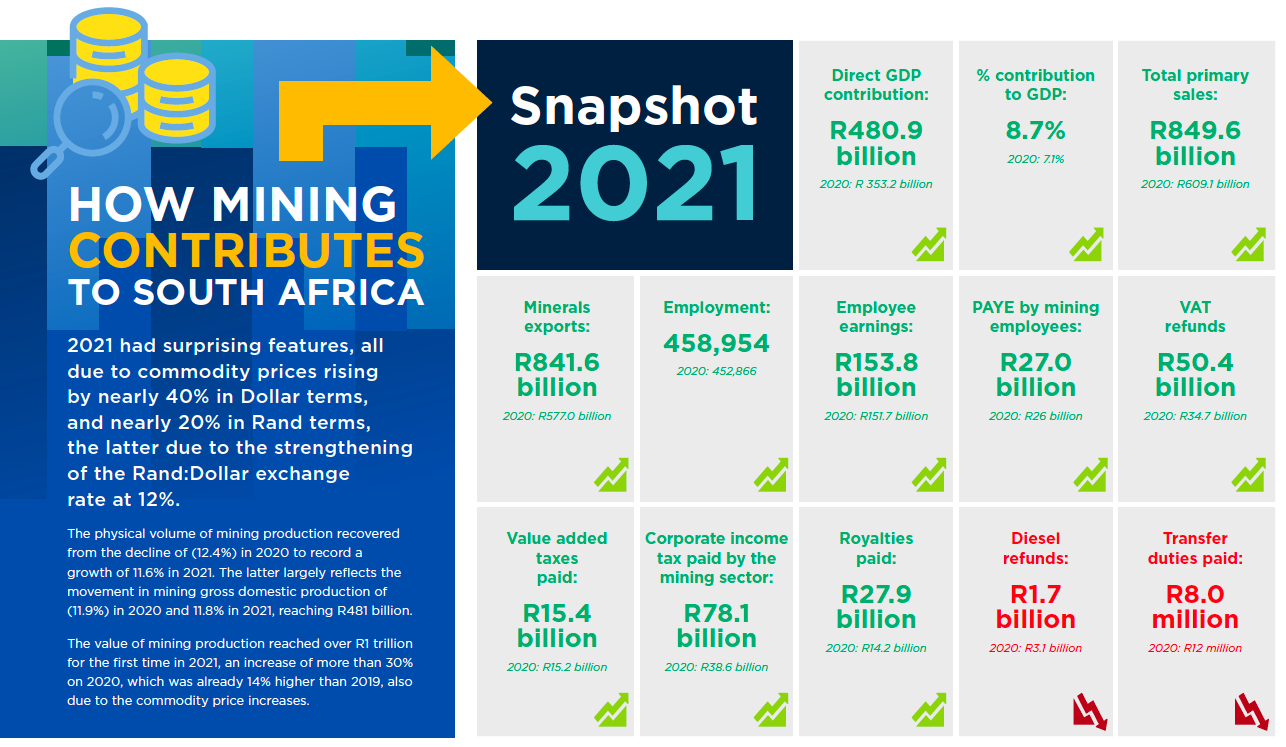 Other mining facts and figures for 2021 include:

“The industry increased employment during 2021, a rare occurrence for a major economic sector in the prevailing climate, more than offsetting the jobs lost in 2020, mainly because of Covid, and adding additional jobs to the economy,” noted the Minerals Council CEO Roger Baxter.

And things would have been a lot better were it not for the shambolic state of South Africa’s public infrastructure.

The Minerals Council said that it “remains concerned about rail and port constraints, which it estimates resulted in an opportunity cost of R35-billion for 2021 based on railed tonnages compared to Transnet’s targeted tonnages. If the capacity of the rail network for bulk commodities like iron ore, coal and chrome is considered, the opportunity loss is R50-billion, a third of which would have flowed into the fiscus.”

It also noted that raw production – as opposed to its value – had not recovered from its peak in the early 2000s and “is struggling to maintain 2015 levels”.

The publication can be found here. DM/BM