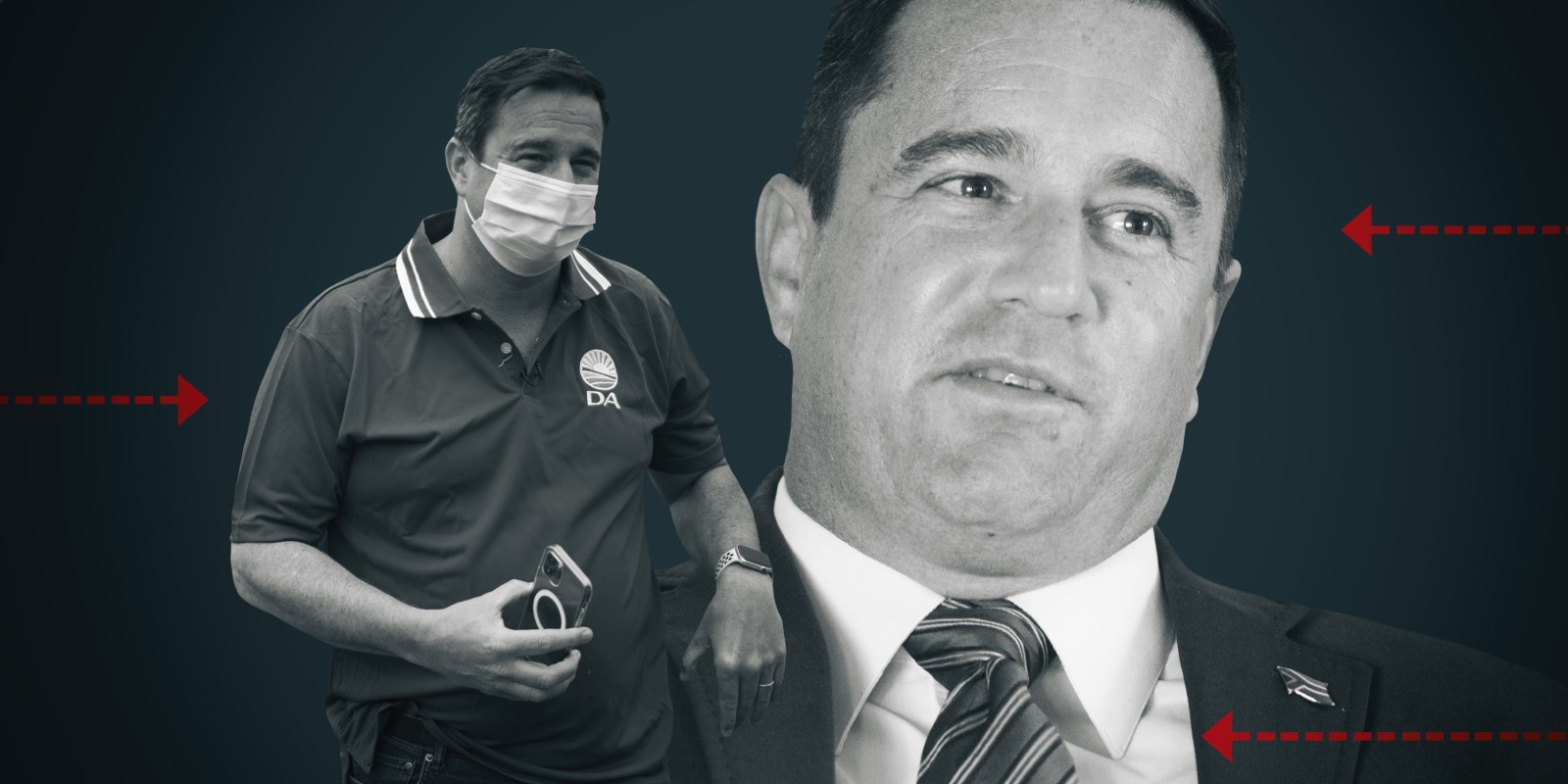 DA leader John Steenhuisen’s controversial ‘fact-finding’ mission to Ukraine is over – and judging by a noticeably brief report-back, the DA is keen to turn the page.

When DA leader John Steenhuisen announced unexpectedly on 1 May that he had arrived in Ukraine for a “fact-finding” visit, he stated that the reason for his trip was because “in the era of fake news and propaganda”, only by assessing a situation first-hand can one “truly know what is happening”.

Said Steenhuisen: “We owe it to the people of Ukraine to tell the unfiltered truth about what is taking place there.”

But anyone tuning in on Monday morning to hear Steenhuisen “brief the nation” – in the DA’s words – upon his return to South Africa would have heard strikingly few facts. Steenhuisen’s public report-back lasted barely 15 minutes, with no opportunity for questions from the media.

The disconnect between the grandiose terms in which Steenhuisen’s mission was initially framed and the perfunctory nature of his report-back gives the impression that the DA leader may have been advised to turn the page on his expedition rather speedily.

It would be an exaggeration to say that Steenhuisen’s trip has been a PR disaster. He received a fairly complimentary editorial from the Sunday Times for establishing himself as “a man of action” in contrast to President Cyril Ramaphosa. News24 editor Adriaan Basson suggested that the opportunity to “show statesmanship and moral leadership” could play well for Steenhuisen down the line in terms of his personal political ambitions.

But it is hard to imagine that the trip has done much as a net positive for the party Steenhuisen leads. Though social media is rarely a reliable gauge of wider political sentiment, those expressing the most positive views towards Steenhuisen’s trip appeared to be members of the DA faithful. At the same time, there has also been a significant amount of criticism of the visit stemming from self-described DA supporters who support the condemnation of Russia but have urged Steenhuisen to focus his energy instead on the myriad problems within the borders of his home country.

It is highly unlikely that the episode will draw any previously opposed new voters to the DA, while it seems to have irritated some existing DA voters and possibly hardened the attitudes of those already predisposed to dislike the party.

It is important to note that the vast majority of the criticism did not stem from support for Russia, but from either the above-mentioned frustration that Steenhuisen’s energies would be better spent on domestic issues, or anger at Steenhuisen’s perceived arrogance in portraying himself as the ambassador for “the majority of South Africans”.

In reality, it is totally unclear what view the majority of South Africans hold on the invasion of Ukraine by Russia. A safe bet would be that most are too preoccupied with more immediate and direct crises to give it much thought, if any at all. As a number of political analysts have pointed out, there is no indication that any foreign policy issues whatsoever play a significant role in the voting choices of South Africans.

The sense that Steenhuisen anointed himself as South Africa’s one true spokesperson, however, clearly did not play well – and does little to dispel the reputation for “white arrogance” that the party has gathered in some quarters.

Steenhuisen did himself no favours by suggesting in a social media post from Ukraine that the impact of the war was already being felt in the rising “price of chips in SA school tuckshops”. It was an observation clearly intended to bolster his contention that “Ukraine’s problems are our problems too”, but a strangely chosen example: one which instantly earned him the new Twitter nickname “Slapchips Steenhuisen” and a barrage of mockery.

Some of the attacks directed at Steenhuisen have been churlish or ill-informed. It is not unusual for opposition politicians globally to carry out this kind of visit; it is also not true that Steenhuisen has been invisible at the site of local disasters like the KwaZulu-Natal floods, as some critics claimed.

But the DA leader has scored an undeniable own goal in opening himself and his party to the tsunami of whataboutery that will follow this trip: every time conflict erupts in a zone not involving white Europeans – and plenty are already raging – you can expect Steenhuisen to be asked why he is not spending six days tweeting video messages from that site.

There are indications that the visit was organised fairly last-minute, and as such may not have been particularly thoroughly considered in advance. Daily Maverick contacted The Brenthurst Foundation – revealed by Carien du Plessis to have funded Steenhuisen’s mission – to ask why it did not bring a multiparty group of MPs to Ukraine rather than only the DA leader.

Brenthurst Foundation director Greg Mills (a Daily Maverick contributor) responded that the idea was mooted, “but given the timescale and complexity of the logistics it was not practicable on this occasion”.

There are those who have pointed out that since the trip was privately funded, taking nothing from either South African state coffers or even the DA’s own resources, the criticism levelled at Steenhuisen is unwarranted and unfair. Seen in this light, the reasoning goes, Steenhuisen’s visit should be viewed no differently from that of any other private South African citizen who decides to fly to Ukraine to assess the situation.

This argument would be more valid if, as mentioned, Steenhuisen had not repeatedly framed himself as visiting on behalf of the South African people as a whole. In his report-back, the DA leader said he told everyone he met in Ukraine the same thing: “I pledged the support of South Africa to their cause.”

However convinced Steenhuisen may be of the righteousness of his stance, and however likely it is that the anti-Russian position is morally justified, Steenhuisen simply has no authority to make such sweeping statements. This kind of hubris gets people’s backs up, and could easily have been averted through more temperate language.

But there is another concern, which is that Steenhuisen’s mission might backfire more seriously. The opposition has every right to point out the governing party’s failings when it comes to foreign policy or any other issue. Indeed, this is one of its core functions. But if Steenhuisen genuinely hopes to persuade the ANC government to change diplomatic course over the Russia-Ukraine conflict, his methods are high-risk.

The news that – as Steenhuisen announced on Monday – he told “mayors, governors, members of Parliament, members of the opposition, former prime ministers, academics, leaders of civil society and ordinary citizens” in Ukraine that the ANC’s support for Russia stemmed solely from “its own narrow financial interests” is unlikely to do anything other than provoke the ANC into doubling down on its stance.

Of course, Steenhuisen may well be correct in his assessment. But it would be an extraordinary government – one South Africa certainly does not have – that would greet this as anything other than a provocation.

If Steenhuisen was simultaneously serious about winning over the hearts and minds of ordinary South Africans to the Ukrainian cause, he would have taken the opportunity of his report-back to address some of the perceptions circulating locally – particularly given his stated aim of cutting through the “fake news” and bringing back an “unfiltered” account. These concerns include the documented existence of neo-Nazi elements within the Ukrainian military and the racism shown towards Africans in Ukraine.

In fairness, perhaps the DA leader had originally planned a more comprehensive report-back – one which would seek sincerely to engage with myths, misperceptions or complexities around the conflict. In the end, however, it was apparently thought best for Steenhuisen to keep it short and move on swiftly.

Meanwhile, it appears that the foreign policy bug is politically contagious. The Economic Freedom Fighters (EFF) has announced that it will lead a picket outside the French embassy later this month “to demand the withdrawal of France from the continent”. Are any opposition politicians in South Africa actually tuned into the mood of the country they live in? DM