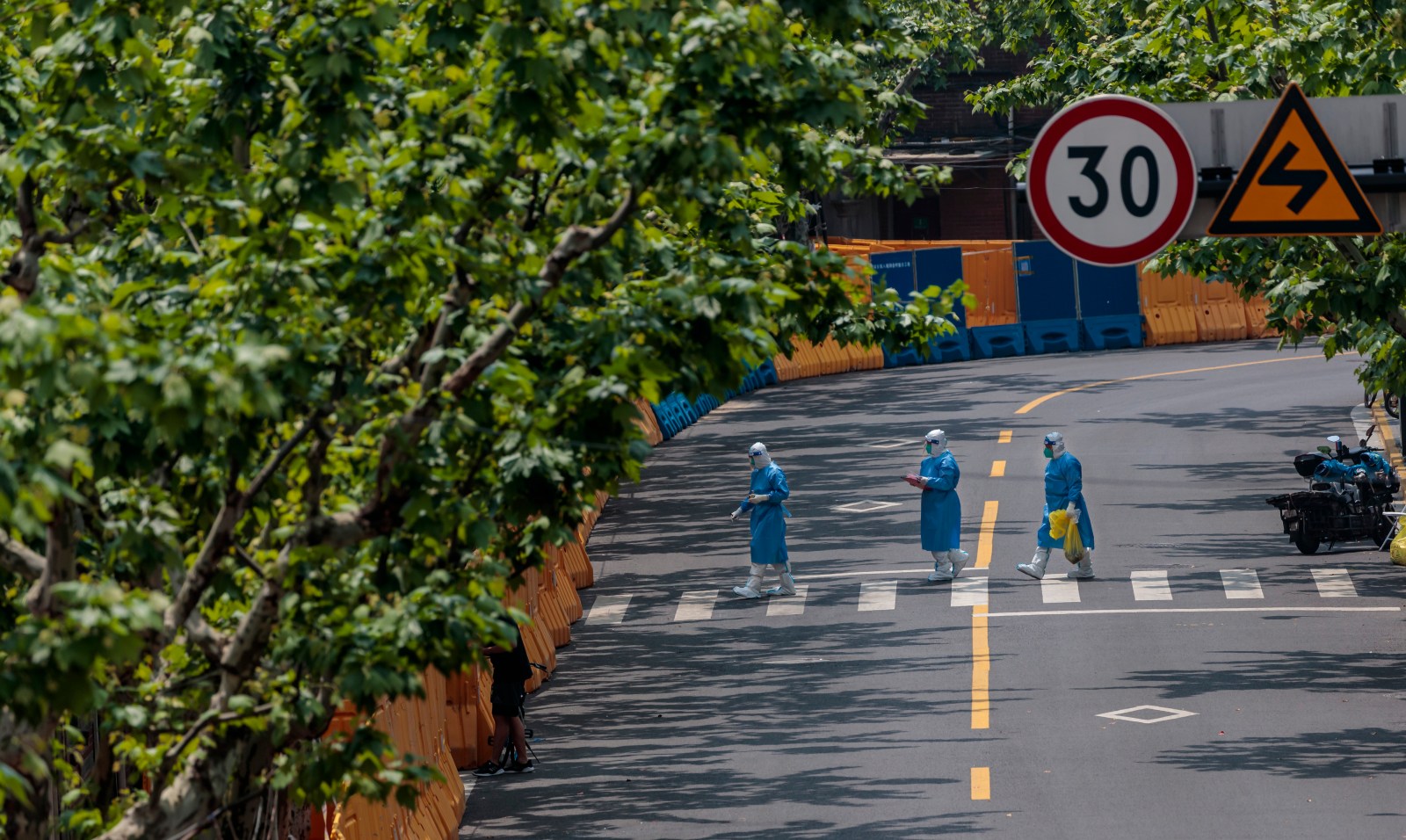 People in protective gear walk to the entrance of quarantined area, amid Covid-19 lockdown of the city in Shanghai, China, 02 May 2022. Shanghai city reported 32 COVID-19 deaths, 727 locally transmitted cases, and 6.606 local asymptomatic infections, according to the Shanghai Health Commission on 2 May 2022. Residents of precautionary areas are allowed to move around within the districts to go to supermarkets and drugstores. However, the increased number of police on the streets alarms people not to walk around and go back home. EPA-EFE/ALEX PLAVEVSKI

SHANGHAI, May 6 (Reuters) - China is setting up thousands of permanent PCR testing stations, with 9,000 already completed in Shanghai alone, as authorities seek to "normalise" tough pandemic controls even after the current round of lockdowns end.

At present, nearly 25 million residents in the eastern financial hub of Shanghai remain under some form of lockdown as the city battles China’s biggest ever coronavirus outbreak.

But in a bid to head off future flare-ups, municipal authorities have been setting up a system that will make regular Covid-19 testing a permanent feature of everyday life, with other cities taking similar steps.

As part of China’s “dynamic” zero-Covid strategy, residents of cities including Beijing have already faced frequent tests, and have long grown accustomed to displaying a “health code” mobile app to show they have not visited high-risk areas.

But the new system will make it a requirement for anyone to have a negative PCR test before entering public spaces. It was unclear how recent the tests needed to be.

The testing stations – located in residential areas, industrial parks, office blocks, and at entrances to train and subway stations – will allow people to be tested in just 15 minutes, officials said.

Beijing, which is battling an outbreak, also said on Thursday that it would implement “normalised” testing and ensure that anyone entering public buildings need to show a negative test result taken in the last seven days.

The city of Hangzhou, 176 km (109 miles) southwest of Shanghai, has also promised to set up 10,000 permanent testing stations, and will allow access to its scenic spots only for people with a negative Covid-19 test from the previous 48 hours.

China has doubled down on its zero-Covid rhetoric, saying the strategy remains the most cost-effective and humanitarian way of dealing with the pandemic, but many residents and business groups have raised concerns about the costs of frequent lockdowns.

Analysts at foreign banks were divided on the merits of the plan for regular testing.

Goldman Sachs said in a note that regular testing could offer a way out for China as it maintains “zero-Covid” while reducing the economic impact, adding that testing costs would be only a fraction of the country’s GDP.

However, Nomura said the benefits of regular PCR testing would be limited, adding that it could cost between 0.9% and 2.3% of GDP, depending on how far the mandate was extended across China’s population.

“Much of this spending will likely crowd out fiscal spending on other key areas,” it added.