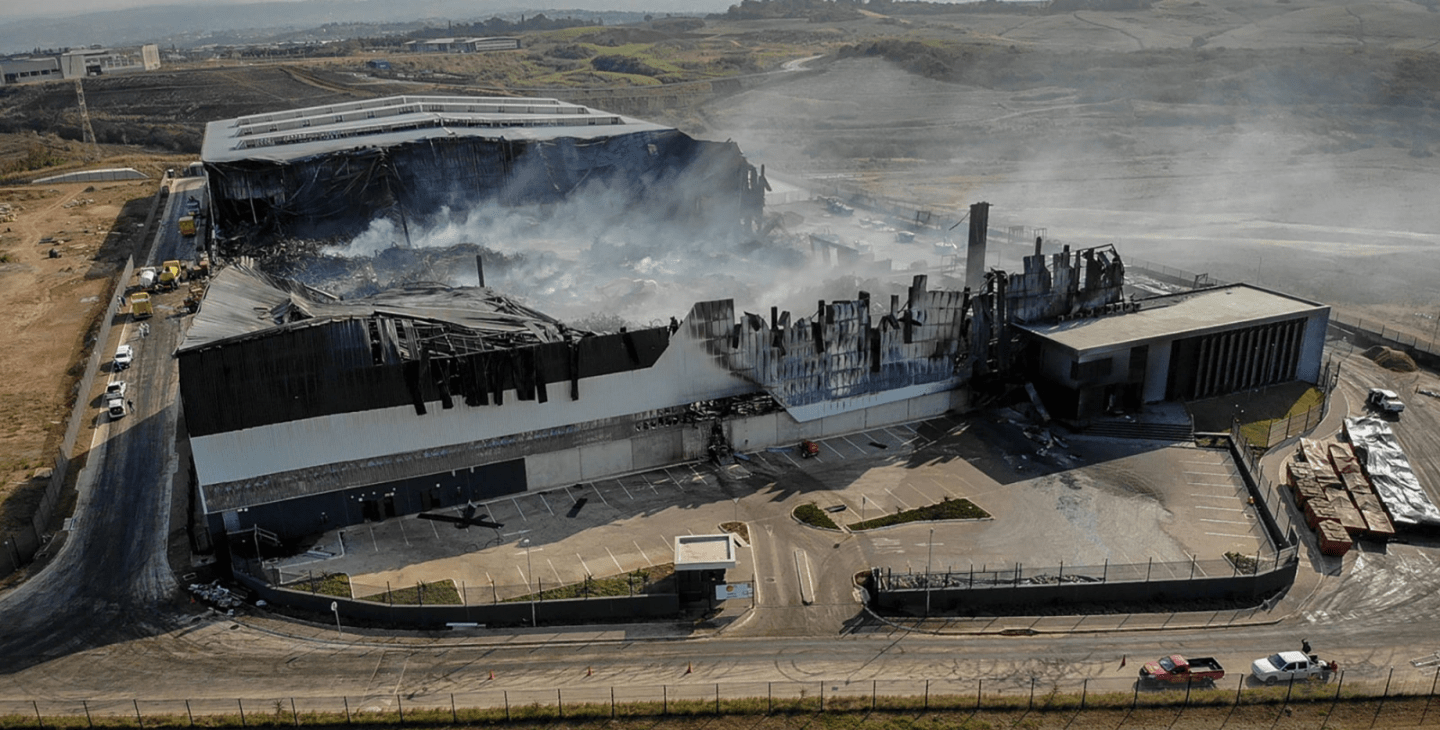 A drone image showing the extent of the damage caused to the UPL warehouse north of Durban on 21 July 2021. (Photo: Shiraaz Mohamed)

Set up by MEC Ravi Pillay, the Multi-Stakeholder Forum (MSF) was established to recognise diverse stakeholders in their right to be consulted on issues related to the UPL chemical fire. Nearly a year after this environmental disaster, UPL’s unwillingness to recognise the MSF is of major concern.

Many readers would have seen, or had direct experience of, the devastating environmental damage from the UPL factory chemical fire started during the riots in Durban on the night of 12 July 2021. The fire sent a toxic plume over surrounding communities for several days. The water run-off from fighting the fire polluted the nearby riverway and ran into the Ohlanga estuary, causing a large fish kill.

As the toxins entered the oceans, beaches along the coastline were closed for nearly four months. All fishing and bathing was banned. Many fishers lost livelihoods and struggled to feed their families during this time.

The UPL warehouse in Cornubia housed more than 700 different types of chemicals used in large-scale agriculture. Many of these stored chemicals are considered toxic to people, plants, fish and animals. Some are considered so dangerous that they are banned in Europe and other countries, and many are restricted in trade under the Rotterdam Convention. The convention does not specifically ban chemicals – instead it establishes a prior informed consent procedure to ensure that restricted hazardous chemicals are not exported to countries that don’t wish to receive them.

The chemicals released into the environment have serious health implications for humans. Without a thorough public health study that tracks these longer-term health outcomes, the true cost of this disaster remains unknown and will be borne by the public.

How and why these toxins were stored in a facility that was not designated a major hazard installation, and why UPL had not undertaken a fit-for-purpose risk assessment are questions that remain unanswered, nearly 10 months after the fire. This legal requirement is in place to specifically assess the risk of events such as spills and contamination. It is particularly important when a facility is within close distance to riverways, informal housing and a zoned education area (all of which predated the building of the warehouse).

Leaving these important questions aside for now, the UPL case raises critical considerations for all South Africans. We all generally agree that we have good legislation in the National Environmental Management Act (Nema), which clearly provides for authorities to hold the polluter to account for damage caused. It is, however, tricky to implement.

While it is true that UPL has paid for ongoing evident environmental clean-ups and monitoring of toxicity levels in the area, and frequently bemoans people unfairly pointing fingers at them, it has a rather narrow conception of accountability. This large multinational is, to date, not yet prepared to take accountability for the damage done to human livelihoods and health from storing these chemicals without proper safety measures and legal compliance.

Of particular concern is the lack of accountability at present from the polluter for the possible long-term impacts on human health due to exposure, future soil and water toxicity levels, or to provide explanations on how the toxic material currently being taken to landfill sites at KwaDukuza in KwaZulu-Natal, Holfontein in Gauteng and elsewhere, is being dealt with to ensure no further harm is caused.

Of major concern is the unwillingness of UPL to accept accountability by refusing to recognise the MSF set-up by Ravi Pillay, the KwaZulu-Natal MEC for Economic Development, Tourism and Environmental Affairs. The MSF was established to recognise diverse stakeholders and their right to be consulted on issues that affect them. Stakeholders, especially communities directly affected, have a right to be concerned, and to request officially recognised structures to ensure access to information and consultation.

After all, UPL had not even made the list of chemicals released in the fire publicly available. It was only through a leaked document by amaBhungane journalists on 18 August 2021 that residents discovered what they had inhaled during those days while sheltering inside, and blocking windows and doors from the noxious and nauseating smell.

Currently the MSF is operating under draft Terms of Reference (TOR) with a “committee” or core group of stakeholders of 26 people who are representing various affected communities and interested parties. The most important feature of the establishment of the MSF is the recognition by the MEC and the Minister that stakeholders have the right to be timeously informed and to participate in decision-making.

The TOR records the commitment of the MEC and Minister to transparency and accountability. UPL has not attended any MSF meetings and has publicly stated its reluctance to recognise the MSF.

It is important to note that the MSF has been given no powers that would otherwise be vested in the authorities. It has also not been given any funding to function. This makes it difficult to operate, to hire venues to meet, to hire specialists to assist with the interpretation of reports and disseminate information to the wider public, and to provide transport and data costs to members of the team who live in the informal settlement of Blackburn Village.

Despite the absence of funds, the group of committed volunteers who make up the MSF have worked hard to keep up with bi-weekly reports from specialist consultants and raised a long list of queries related to the reports. They have also made comprehensive comments on why they do not support UPL’s proposal to dispose of waste from the Pollution Control Dam (PCD) to sea via the southern outfall, and to divert contaminated water away from the PCD and directly into the estuary.

The MSF made detailed comments on the current proposal to allow the toxic contents of the PCD to be diluted and discharged into the estuary, noting its strong opposition thereto.

The MSF has long advocated for a site-based treatment facility to deal with wastewater in an environmentally sustainable manner.

On 23 February 2022, some members of the MSF conducted a site inspection with the authorities and specialist consultants contracted by UPL. The MSF raised concerns regarding compliance with section 30A of Nema, the accuracy and interpretation of soil toxicity and air quality data, long-term health impacts, the capacity of the PCD and the KwaDukuza Municipality Landfill operated by Dolphin Coast Landfill Management, and the potential local impacts emanating from the overburdened landfill.

In addition, part of the land that was contaminated by the chemical spill, falls in areas zoned for future low-cost housing. The MSF queried if there was a plan to ensure that these families, many of whom will plant food gardens, would not be handed toxic land to live on?

Putting it to the test

What does accountability mean under Nema’s polluter pays principle? The UPL case is putting this to the test.

Currently UPL’s lack of recognition of the MSF means that it is not compelled to contribute towards the cost of the MSF to enable it to fulfill its mandate in a meaningful way. Funds need to be available for the MSF to function administratively and to seek expert peer review of technical reports.

Without this we, the MSF, are wholly reliant on the data and interpretation provided by specialists that UPL pays, and when UPL chooses to make these public. This places far too much control in the hands of the polluter. UPL’s refusal to recognise the MSF means that the MSF has no direct engagement with UPL and their specialists to question and gain clarity on the data they release.

In fact, the consultants’ hands are tied with non-disclosure agreements they were required to sign. Surely accountability demands meaningful participation where the concerns of stakeholders are respected and acknowledged, and they can contribute to decision-making? UPL has a chance to take this accountability seriously.

The MSF would urge them to do so soon, to ensure that the public’s right to consultation in matters that directly impact on their health, environment and livelihoods is honoured.

Signed by the nominees for appointment to the UPL Multi-Stakeholder Forum steering committee:

by The UPL Multi-Stakeholder Forum, Daily Maverick
May 8, 2022