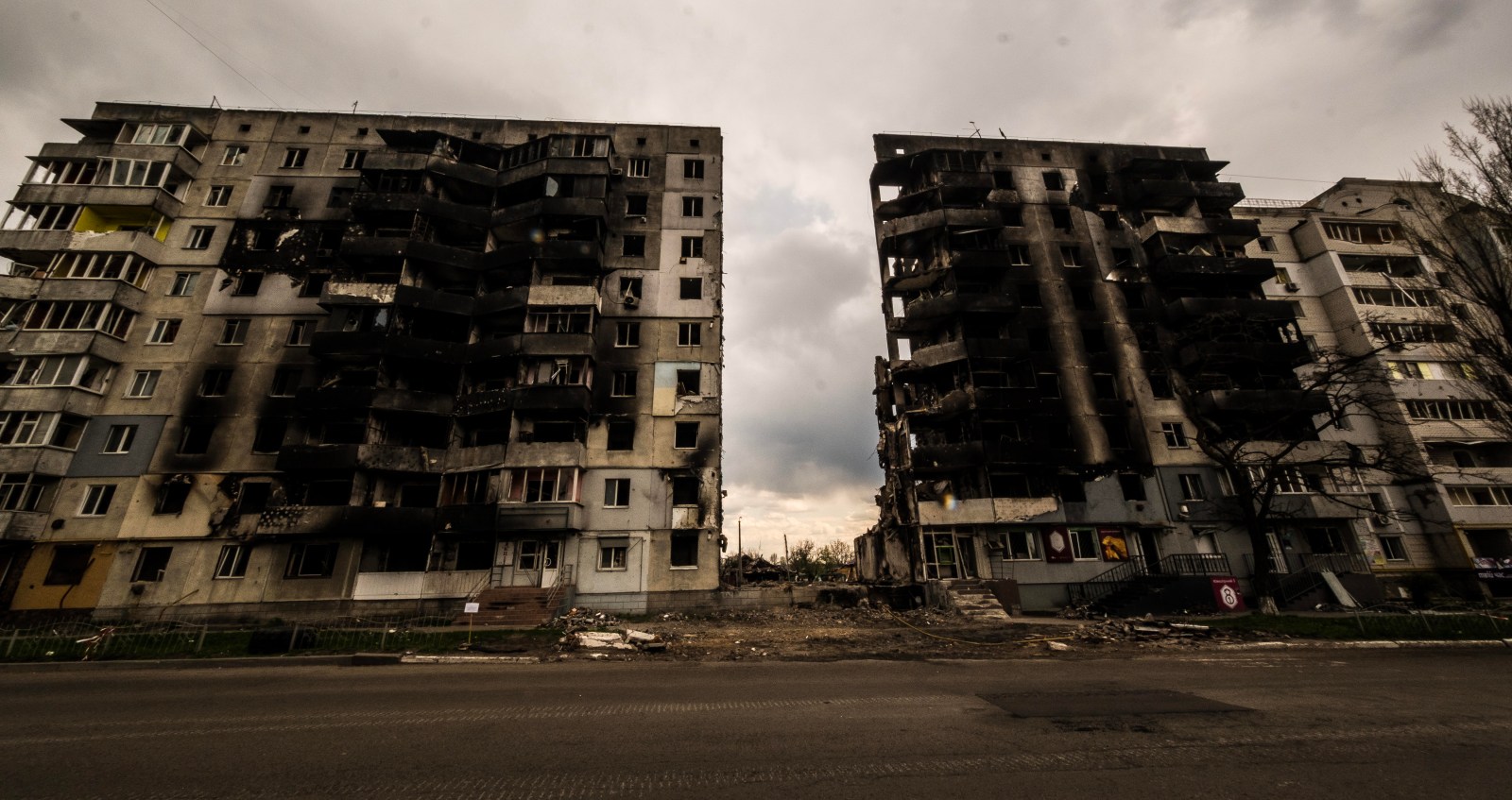 The Russian way of war – the damage to civilian infrastructure, such as here in Borodyanka, a suburb of Kyiv. (Richard Harper)

The current path of the conflict in Ukraine suggests it will go on for some time, and at increasing cost. There are clear reasons of self-interest — and lessons from history — that should motivate Africans to become more involved.

Treblinka. Today only sounds of birds and wind through the trees disturb the silence of the stones. One hundred metres from their arrival at a railway siding in the forest, 800,000 souls met their fate in an industry of death.

We say, “Never again.” But just a border away, death churns. For Lowicz, Magnuscew, Wyszkow and other homes across Poland and Europe read today’s horror of Bucha, Irpin, Hostomel, Mariupol and Borodyanka. And now the Jews are Nazis, at least in the fake reality of madmen politicians.

The first is that there is a military stalemate, that Russia digs in and, with the Ukrainians lacking the resources to evict them, this creates a “frozen” conflict in a broken and occupied country, heavily dependent on external resources for its survival. This presumes that the Russians can withstand Ukrainian counter-offensives, and that they don’t tire out.

The second, the likelihood of which depends on the Russian military performance remaining underwhelming and Ukraine receiving both offensive military capabilities and enough aid to keep going, is that Russia’s Donbas offensive stalls, fails and Ukraine pushes out Putin’s troops.

This depends to an extent whether Putin reverts, or not, to a bittereinder roll of the dice by using tactical nukes or, more likely, striking a nuclear power station in Ukraine with a conventional weapon. But the use of such weapons – or targets – would likely only increase his isolation.

A third option is that Russia wins, or at least wins enough, due to its overwhelming military firepower and pool of manpower. In this scenario, Putin dominates the commodity- and industry-rich east of Ukraine and closes the land bridge to the Dniepr River, then pushing on to encircle Odesa and link up with the secessionist Transnistria region of Moldova. The problem for Russia is that it is going to have to run a part of Ukraine that it has broken, and with its own shrinking economy. These factors, too, prevent the clear victory that Putin sought in Ukraine as a first step to recreating the Soviet empire, to be followed by the Caucuses and Baltic states.

Now, more than likely, he is facing an emboldened and potentially expanded (if Sweden and Finland decide to join) Nato, with a wounded economy. Military neutrality seems to have few virtues with Putin in power in Russia. This effect and the reputational damage to Putin and the immediate geo-political effect of driving Europe and the US closer seems not to have been foreseen by either the Russians or China’s leader Xi Jinping.

Nato countries will now fight, as one Warsaw-based security expert put it, “to avoid a Polish Bucha”. Such incidents, he warns, are less “war crimes, than the Russian way of war”. Soviet military doctrine still pervades in the Russian armed forces; which explains not only its failure to distinguish between civilian and military targets, but its relatively poor performance against a more modern, mobile and highly motivated enemy.

This sets up a fourth scenario: that Putin goes. While his support levels (and backing for the war) remains high in Russia, his rule does not depend on popular power, but rather that of the oligarchs and the security apparatus. Until now they have been dependent, too, on Putin, but that relationship will inevitably change as sanctions bite, and if such cracks are deliberately targeted and widened from outside.

Pawel Jabłoński, Poland’s undersecretary for foreign affairs, sees no other endgame than Russia’s defeat. “Even with military successes they can’t go back to before the war. Putin is politically ‘done’,” he adds, but cautions that “until that happens, Ukraine will suffer a great deal”.

At the very least, Putin is a diminished figure, a gambler who has not succeeded, stripped of his façade as the cool, calculating strategic genius, he is now just a man accused of war crimes.

The scenarios least favourable to Africa are those where Russia drags out the war – or becomes an uneasy ruler of conquered territory.

Jabłoński empathises with those African countries which are reluctant to take a side. “But,” he notes, “there is an aggression, with a full-scale war, with deliberate genocidal plans to hide the killing of Ukrainian elites.” He warns, too: “Russia is doomed to lose, one way or the other, and being too close to them doesn’t serve South Africa’s interests.”

Of course, many reasons are given for Africa staying away from saying or doing anything about Ukraine. It’s a long way away, we have problems at home, America has no right to criticise Russia after Iraq and Afghanistan, if Ukraine why not Palestine, it’s a domestic political hot potato in an (ANC) election year … and so on.

These choices are made easier by the lack of pressure by the West. Africa gets a free pass in sympathising with Putin while continuing to receive Western aid and plaudits. There is no downside, which explains, for example, why South Africa’s voting coincidence with the US in the UN General Assembly averaged just 26% between 1994 and 2018. On issues of human rights, voting overlap peaked at 62.5% in 1995 and dropped to 8.3% in 2013, at the start of Obama’s second term. On issues of economic development, the voting coincidence with South Africa’s largest investor and second-largest trade partner was just 8.2% over the 23 years. By comparison, South Africa voted with China most of the time, averaging 89.1%.

The lack of spine clearly doesn’t help Africa or the West.

While one can understand why some African elites would fear threats to oligopolistic control, there are several reasons for African citizens taking a more engaged if self-interested line with Russia’s war.

The attempted recreation of its past empire by Putin should resonate badly with the continent given its colonial history. It is sometimes forgotten that Europe has its own, equally unpretty, colonial history. Actions that could indirectly undermine Africa’s borders, already a recurrent source of tension, should hardly be welcomed. There are also interests in maintaining the flow of Ukrainian cooking oil (Ukraine supplies half of global demand), wheat and corn to African economies. Already the price of cooking oil worldwide has doubled since 2020.

This requires actions to open up the port of Odesa from the Russian blockade, and for Russia to return the hundreds of stolen Ukrainian tractors and other farm equipment.

These interests are going to matter even more if (and when) the Ukrainians win the war, and the type of country that emerges and the relationships it forms. The appetite of Ukrainians for long overdue governance reforms will no doubt be increased, in part to ensure a European future and the protections and opportunities it affords.

The Ukraine of the future

The rising generation of Ukrainians, especially millions of refugee children, will be more worldly, multilingual, Europe-oriented, and educated. Their lives will be shaped by today’s events. There will, in particular, be an even stronger Poland-Ukraine network of mixed families and shared experiences. The coalitions that may form from this – commercial, scientific, military, political – will be different, powerful and potentially far reaching.

Also, some thought should now be given to a post-Putin Russia, one possibly with a future more closely entwined with Europe and its security and economic institutions.

And then there is, of course, African support for freedoms. That most African people prefer democracy to any other sort of system under which to live is another positive chord with Ukraine, as is the protection of sovereign norms and the right of self-defence, as enshrined in Article 51 of the UN Charter. Such freedoms and human rights are indivisible and require mutual support by all nations. If they are to be respected in Africa, they have to be respected by Africans everywhere.

Treblinka reminds us that denial is no excuse. Knowledge is this time in our hands. It is, moreover, no time to be quiet. What part of this can be so difficult to contextualise? Then, as now, memory reminds us of our power. DM

Dr Greg Mills writes from Warsaw, and has been in Ukraine this past week.  He is director of the Brenthurst Foundation. www.thebrenthurstfoundation.org